July 19th marked the 32nd anniversary of Iran’s 1988 massacre of 30,000 political prisoners. Most of these prisoners were members and supporters of the People’s Mojahedin Organization of Iran (PMOI/MEK). Following its forced acceptance of a ceasefire with Iraq, and fearing eruption of war-torn society, the Iranian regime committed this crime against humanity to paralyze the democratic force of change. In fact, the regime has been ruthlessly persecuting, imprisoning and killing members and supporters of the MEK.

Simultaneous with killing dissidents, the Iranian regime has been pursuing a demonizing and disinformation campaign against its political opponents, mainly the MEK and the National Council of Resistance of Iran (NCRI). The regime uses the demonization campaign to:

1- Pave the way and justify further killing and terrorism against the Iranian Resistance’s members and supporters.

2- Discredit its viable alternative and portray this regime as irreplaceable.

3- Encourage the international community to continue the appeasement policy.

In recent years, parallel with the advance of cybertechnology, the regime has been using social media platforms and the internet to further spread disinformation against the MEK and the NCRI. Using hundreds of fake accounts, the regime tries to downplay the Iranian Resistance’s impact on the Iranian society. This is indeed the flip side of the coin of killing protesters on the streets in broad daylight and shutting down internet across the country for days during the nationwide Iran protests in 2019.

The NCRI recently held its annual “Free Iran Global Summit,” virtually due to the COVID-19 pandemic, connecting some 30,000 locations from more than 100 countries together. Infuriated over the vast political and social support this event received, the Iranian regime launched a coordinated attack on several websites affiliated to the Iranian Resistance, including: Mojahedin.org and Iranntv.com, the MEK’s Farsi website and Iranian opposition’s television network website, respectively. Both of these websites were live-streaming the “Free Iran Global Summit.” the Iranian regime even tried to hack a web service provider to redirect queries to MEK-affiliated websites to other locations.

In this regard, the MEK wrote on its website: “Despite the regime’s efforts, the Free Iran online event was widely viewed and discussed on the internet. According to a Google report, during the event, there was a 1,000% increase in search about the MEK in Farsi and English, which attests to the regime’s failure to shut down the voice of freedom and democracy in Iran.”

Hundreds of politicians and renowned experts attended the NCRI’s “Free Iran Global Summit,” which lasted for three days. Among these distinguished guests was Ms. Theresa Payton, a well-known and highly respected U.S. authority on cybersecurity. 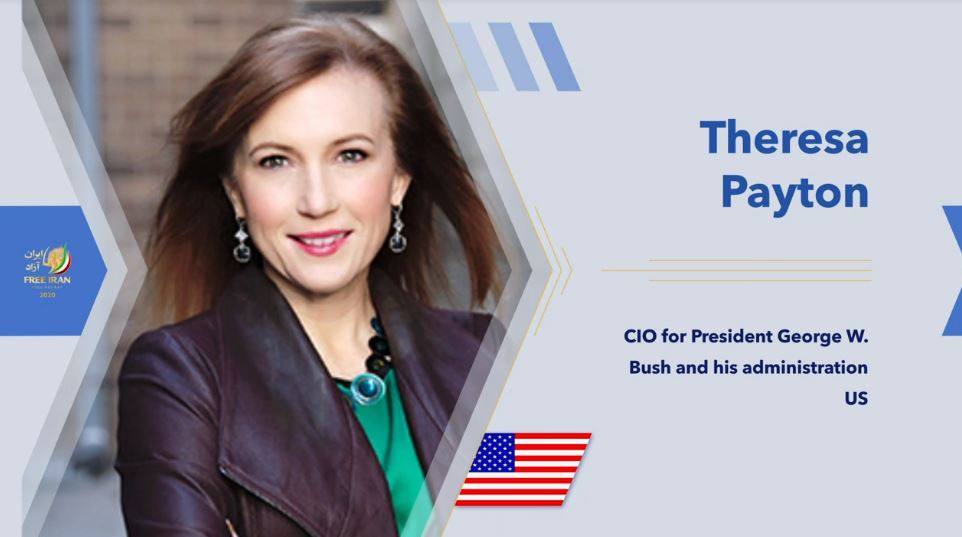 The following is the full text of Ms. Theresa Payton’s speech at the “Free Iran Global Summit”, in which she delved into the Iranian regime’s malign cyberactivity:

Hello, and thank you for having me today. I am so honored to be a part of the agenda. I want to use my time to inform and engage you on the cyber domain and what actions we must all take on behalf of the citizens of Iran. We can change their future and the world’s future and see a free Iran soon.

Warren Buffet says cyberwarfare is the greatest threat to mankind, even more so than nuclear weapons. He’s correct. We’re under siege, deep in the middle of a new type of war. And in an increasingly interconnected world where nearly all adults have access to robust devices in their pockets, the next frontier of security isn’t physical, it’s digital. As daunting as the thought of nuclear wars, bombs, and bullets are, the hacking of systems and the manipulation of our minds are equally alarming threats.

The Iranian regime is at the forefront of the actors in cyberwarfare and we must stop it. The current Iranian regime uses a mix of cyber intrusions, digital manipulation campaigns, and terrorist activities or threat of such as their key strategy for maintaining the regime’s operational status quo and to improve their standing on the world’s stage and suppress their citizenry. Iran has probed, surveilled, and in some cases successfully attacked critical infrastructure of countries around the globe including the United States. Iran’s regime also hides behind cyberoperatives and fake personas. They can pretend to be our neighbors and fellow citizens. They are inside our digital infrastructure and inside our social media. And during this pandemic, COVID-19, social media is the replacement for the town square for socializing.

Let’s examine how they leverage the cyber domain to maintain control. In Iran, the crackdown on opposition and the media is enforced by the government. Their documented history includes arrests, executions, and filtering all news through state-run media or even turning off internet access for its own citizens. They also suppress and digitally track the opposition and even the objective reporters. The Iranian regime uses a mix of these heavy-handed tactics along with subtler, more covert attacks or manipulation campaigns on social media to spread disinformation and fake news at a velocity and scale that would have been unheard of before the digital age.

As I wrote about in my new book, Manipulated, Iran’s goal is to drive positive news about its current regime, often manipulating its own people to ensure undying support for the mullahs, ideological and international political interests. The cyberoperatives acting on behalf of the Iranian regime seek to blunt the media’s ability to investigate their false dealings. They also wish to coopt the media narrative into shoring up their reputations at home and abroad to support their interests. Iran has been using social media influence operations to discredit the pro-democracy movement, mainly the MEK, to their own citizens for years. Case in point, Iran promoted fake news relating to the Iran nuclear deal trying to persuade the world that their nuclear program existed solely for peaceful use and that its military involvements in countries such as Yemen, Iraq, and Syria, were humanitarian.

The theocracy of Iran attempts to interfere with the public and political sentiments within other countries using their manipulation machine to stoke anti-Semitic, anti-Saudi, anti-American, and anti-Western narratives and stir up negative actions and emotions. Reuters exposed in 2018 more than 70 Iranian websites run out of Tehran that pretended to be local news organizations in other countries. The exposé found the sites were written in over 16 languages, including English, Arabic, Spanish, and Persian, to ensure readers that they would find their propaganda believable and hiding behind fake personas that look like news outlets, nonprofits, and grassroots organizations. Iran is known to block websites, social media networks, censor and track mobile connectivity, threaten, and socially engineer reporters, meddle with access to internet-based encrypted messaging platforms, or restrict speeds or remove access to the internet altogether.

As the internet becomes more ubiquitously available, the authoritarian regime of Iran scrambles to find ways to ensure they increase their influence over their citizens. That is why the Iranian people and protesters are becoming more creative and technical in using internet to get their voices heard globally. This is our call to action. Fundamentally, the United States must step up to address the cyber domain issues with the same level of concern appropriate to the next Manhattan Project, harnessing a combination of government resources, national lab research, private sector industry expertise, and collaboration with educational institutions. We will never find a solution to a free Iran or safety from the regime’s mix of citizen oppression, cyber intrusions, and terrorism without dedicating ourselves to a bold new approach.

I offer a few steps. Step one, we need a comprehensive strategy across countries and the private sector to enable the citizens of Iran to achieve a free Iran. Step two, we need to ensure that the people of Iran can share in real time threats that could have an impact on their anti-regime protests and call for democracy. Step three, through financial backing, expert advice, traditional media bombardment, and yes, now, social media influence campaigns, the United States and other countries could use an amplification campaign to bypass the Iranian regime to promote regime change by the Iranian people. We must quickly evaluate the effectiveness of diplomatic measures and set up a threat hunting team that aggressively searches for adversarial activity from the Iranian regime, especially those targeting the opposition.

Step four, act. We cannot allow excuses anymore. This is the crisis of our time. If a coalition of international policymakers, technology, and citizens act now the overall future for the people of Iran and the world will take a more positive and different course. As George Washington wrote from Mount Vernon in 1799, “offensive operations oftentimes is the surest, if not the only in some cases, means of defense.” Thank you for having me. I am honored to share these ideas and a call to action with you.

. @TrackerPayton: The U.S. must step up to address the cyber threat of Iran’s regime. We will never find a solution to a #FreeIran2020 without dedicating ourselves to a new approach.https://t.co/BsW2TGXjgF