Italian Parliament’s Majority, Call for Accountability of the Perpetrators of the 1988 Massacre of MEK Members by Iran Regime 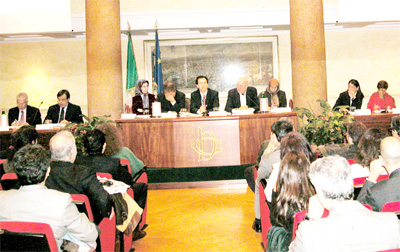 NCRI – On the verge of the Iranian opposition’s major convention in Paris, the majority of the Italian Parliament issued a statement calling for the prosecution and punishment of the perpetrators of the 1988 massacre of political prisoners. This massacre, carried out under orders issued by former Iranian regime leader Ruhollah Khomeini, is considered as a crime against humanity.

Recently, as arbitrary executions increased in Iran, new details of the 1988 massacre of 30,000 political prisoners have been revealed and left the Iranian society in shock.

On The August 15, 1988 sound file of the meeting between then Khomeini’s deputy, Ayatollah Hossein Ali Montazeri, with four judiciary and intelligence officials involved in the massacre in Tehran, unveils shocking details of the largest massacre of political prisoners after World War II.

One of these four individuals, dubbed the inmates as the “Death Commission,” was Mostafa Pour-Mohammadi, Rouhani’s current Justice Minister; another heading the Judge’s Court, and a third individual, Ebrahim Raisi, was prosecutor general until a few months ago and recently appointed by Iranian Supreme Leader Ali Khamenei as head of one of the largest economic-political government institutions. Raisi is also named as a candidate to become the regime’s next Supreme Leader.

33,700 political prisoners were massacred in 1988, according to the regime’s former intelligence minister.

“All individuals in prisons across the country who continue to support the People’s Mojahedin Organization of Iran (PMOI/MEK) are condemned to death,” Khomeini’s fatwa read.

“Any individual being in any phase of his/her sentence, and if ever supported the PMOI/MEK, must be executed. Destroy the enemies of Islam, immediately,” he said in response to questions raised by his regime’s chief judge.

‘Killing thousands of people in a matter of a few days’ will backlash. The PMOI/MEK are a mentality, an idea, gaining strength when killed, he said.

Death commissions were established in Tehran and numerous other cities (a total of over 70 cities). Amnesty International and many other international human rights organizations had announced this massacre as crime against humanity.

Silence in the face of these horrific killings and the impunity currently enjoyed by the perpetrators, who currently are ranked as senior political/security/judicial officials, practically encourages them to continue their crimes.

To this end we call on the Italian government to:

Firstly, strongly condemn the 1988 massacre and hinge any relation with Iran on stopping all executions.

Secondly, call on the United Nations High Commissioner for Human Rights, Human Rights Council, General Assembly and Security Council to place on their agenda launching probes into this massive crime, and sending the perpetrators of this crime before justice.

Previous articleIran: The Staffs of Telecom Staged an All-Out Strike
Next articleThe Workers of a Major Sugarcane Company Went on Strike in Western Iran