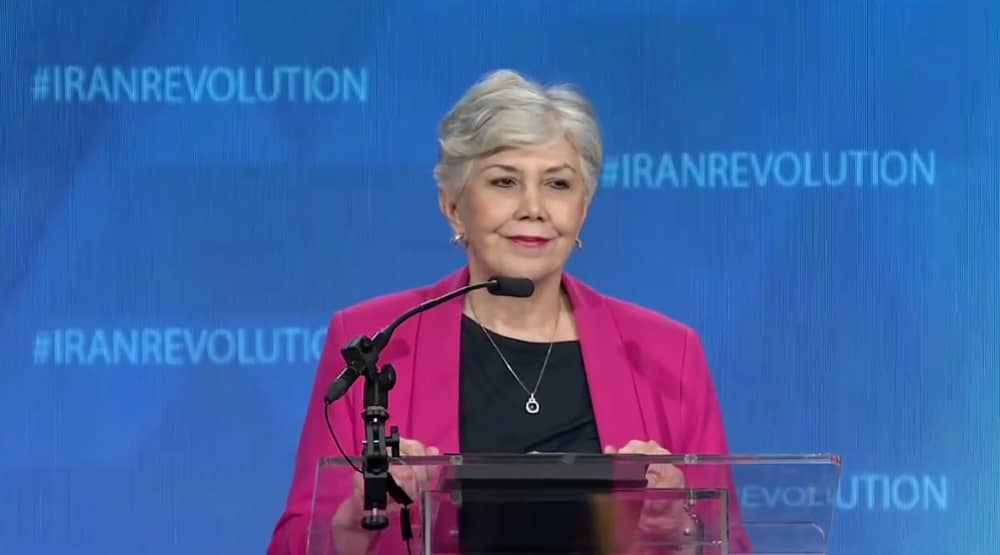 “We need to see a major policy shift in this administration and among our leaders in this city,” said Ms. Linda Chavez, former White House Director of Public Liaison under President George H.W. Bush, addressing a bi-partisan conference in Washington D.C in solidarity with the Iranian people’s uprising and their organized Resistance movement. The conference, organized by the Organization of Iranian American Communities (OIAC), was attended by several renowned American politicians and featured Mrs. Maryam Rajavi, the president-elect of the National Council of Resistance of Iran (NCRI), as its keynote speaker.

An excerpt of Ms. Chavez’s intervention during the conference on December 17 is as follows. The text is revised for clarity.

Thank you. It is an absolute honor to be with you today and to be with you so close to our capital, to the symbol in this country of our freedoms, and to talk to you about the freedom that the people of Iran have been waiting for so long. It is my privilege not to be a newcomer to this fight. And in fact, I was thinking as I was watching the news and Americans are wonderful people. We are very proud of all of our accomplishments, but we have very short memories.

And we don’t always recognize that what we’re seeing today is not a recent phenomenon but a very old one. We heard from Governor Locke that it’s absolutely true that the most recent uprising in Iran was sparked because a very brave young woman, Mahsa Amini, lost her life because she was unwilling to do what the regime wanted, down to the very inch of her hair that had to be covered. And we saw that there was great revulsion among the people of Iran, recognizing how terrible this was, how wrong it was. And it isn’t because she was attempting to engage in some sort of revolt. She was simply going about her everyday life.

But in Iran, with the regime that is in power and has been in power for more than 40 years, going about your everyday life, living your life as you choose, is not, in fact, an option. The regime reaches down into every family, into every business, into every gathering to dictate how people have to behave and not just how they have to behave, but what they can believe. Well, there is an alternative to that. And as I said, I’ve been with this movement for a very long time.

Now, we have been amazed at what has gone on in Iran, with all 31 provinces having had demonstrations, people taking to the streets, 220 some cities, and 30,000 arrests of brave Iranians. But the reach of this regime is very, very wide and very, very deep. We heard from Governor Locke about the attempted bombing of one of the NCR’s gatherings in 2008 in Paris. I was there along with others. I think others who were here today were there.

Madam Maryam Rajavi has been a leader of this movement for a very long time. And I have been privileged, as I know many of you have, to be with her on many occasions to hear her talk about her belief in the people of Iran and her fight against a regime that represses those people. Maryam Rajavi is leading the resistance, and her leadership, I think, is all the more important because she’s a woman.

In #WashingtonDC, @chavezlinda endorsed the decades-long leadership of @Maryam_Rajavi in the fight against the regime in #Iran. pic.twitter.com/zRuCBKJov2

One of the things that this regime has made clear from the very beginning is that if you can repress the women in a society, you will control that society. Well, we say no to that.

I think what has made many of us so hopeful is in seeing the protests that have broken out in these more than 200 cities around Iran, that what we see is that this is not just a fight against inflation, higher prices, the inability to get paid if you happen to be a government worker or a teacher, the corruption that goes on. Or even just a fight against things like the morality laws of the state.

This is a fight that is much bigger. And the people who have taken to the streets are saying it loud and clear. They want regime change. They want the ayatollahs out.

We cannot afford to sit idly by and watch that happen because, in fact, if the people of Iran are not successful, we’re going to continue to see the regime doing things that make life not just terrible for the people in Iran, but terrible for people around the world.

We need to see a major policy shift in this administration and among our leaders in this city. We need to quit pretending like the ayatollah and his henchmen are honorable people with whom we can negotiate treaties, for example, not to pursue nuclear weapons. This is not possible. It is not possible to negotiate with these thugs. We must pursue a policy that says, if you are going to punish your people, we are going to punish your regime.

They have the right to make sure that they have a free press. These are all parts of Madam Rajavi’s ten-point plan for Iran. It can and should be the model for the future of Iran. We are in a period of celebration in the capital. This is a holiday spirit, and we are used to hearing the bells ring to toll in a new year.

Well, I want to see the bells ring to toll for freedom in Iran.

Thank you very much

Previous article
Iran Revolution Dawns and The Dusk of the Clerical Theocracy Falls
Next article
Iran: A 12-Year-old Girl and a Man Murdered by Suppressive Forces