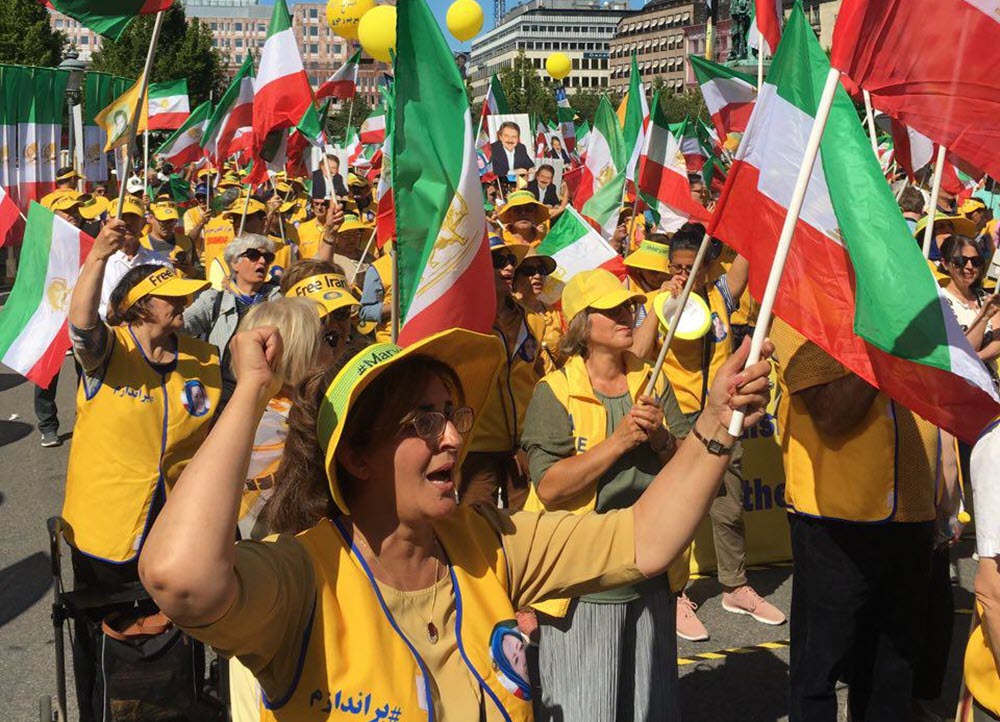 Thousands of supporters of Iran’s main opposition group, the People’s Mojahedin Organization of Iran (PMOI), otherwise known as the Mujahedin e Khalq (MEK), are gathering today in Stockholm to urge Sweden and the European Union to cut all diplomatic and trade relations with the mullahs’ regime and recognize the right of Iranian people to overthrow their dictators. The NCRI Foreign Affairs Committee will be covering the event live on Saturday, July 20, 2019. This page will be updated throughout the day:

13.45: Thousands of Iranian MEK supporters are starting to gather in central Stockholm in preparation for the march.

Thousands of Iranians are gathering today in Stockholm to urge Sweden & the EU to cut all diplomatic & trade ties with the mullahs’ regime and recognize the right of Iran’s ppl to overthrow their dictators. We’ll be live-tweeting. march in Stockholm, prominent Iranian singer Gisoo Shakeri tears a photograph of the Iranian regime’s Supreme Leader Ali Khamenei while chanting that the Iranian people are determined to achieve regime change. and for a . . There are no more excuses for overlooking the enemy of the people of Iran. . expect Europe which has suffered tremendously in the past century from Hitler’s fascism, to understand and feel the suffering of Iranian people today. Europe should side with the desires of Iran’s nation. for resistance to overthrow the clerical regime and establish democracy and popular sovereignty. “ 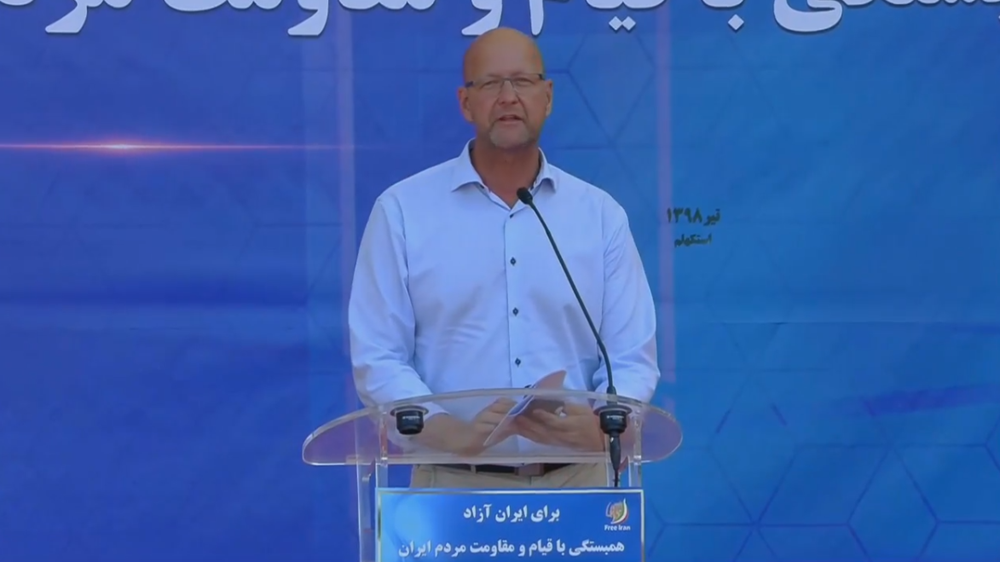 15.40: Magnus Oscarsson, a Member of Swedish Parliament, tells the Free Iran rally in Stockholm:
“We want to tell the people inside Iran that they’re not alone in their fight against repression. The Swedish government must do more to support them.” 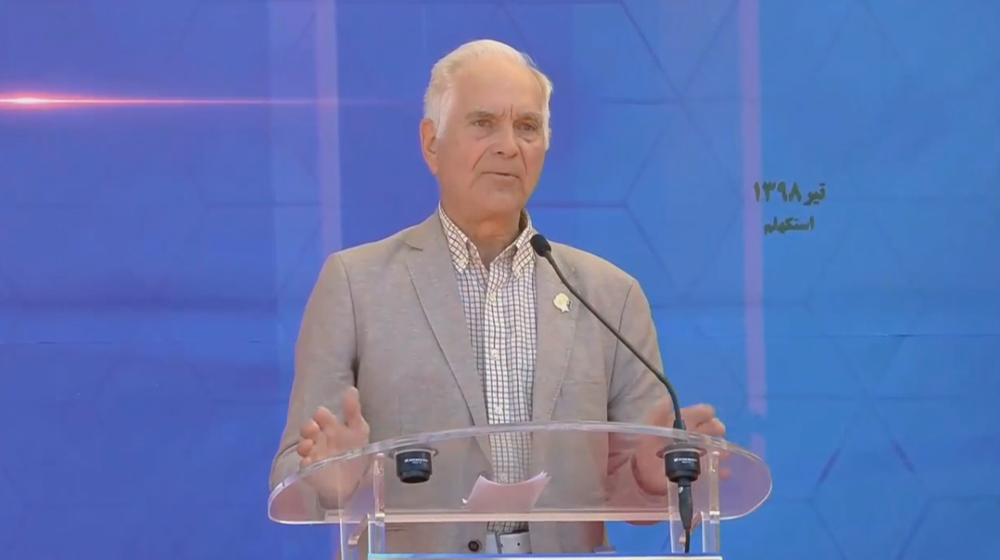 “It’s impossible to imagine how you could have built Ashraf 3, this beautiful place, in 20 months.”
“The appeasement policy has failed. Western governments are happy to have signed the nuclear agreement with the mullahs, and they are willing to push other issues such as human rights violations under the carpet if it makes money for them. It’s horrible,” he added.
“It is time for European countries to change their policy toward Iran… There have been many resolutions that have condemned the human rights violations in Iran. I say to my Foreign Minister: go ahead and formulate a new resolution to condemn the mullahs,” Mr. Solnes concluded. 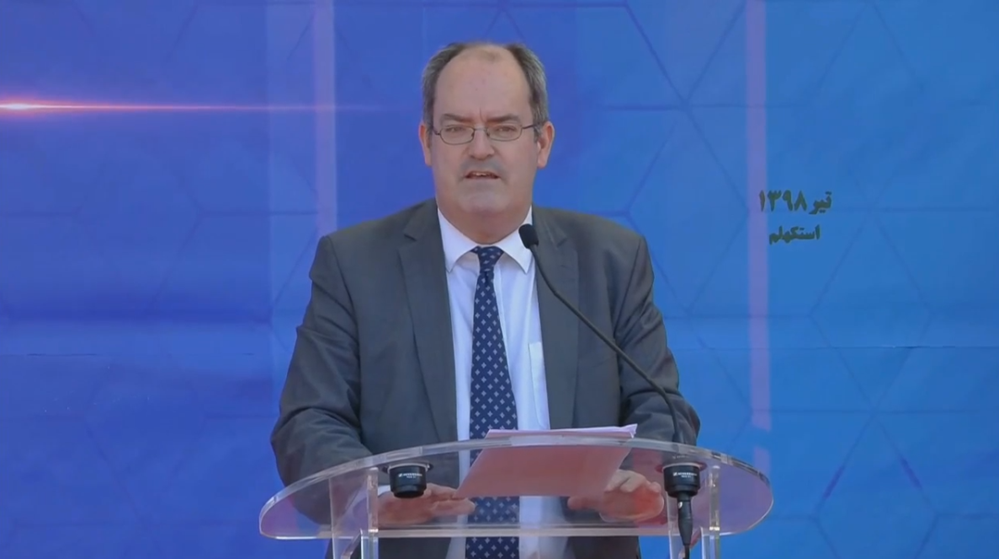 15.50: Irish Senator Gerry Horkan tells the Free Iran rally in Stockholm:
“I had the privilege to meet many members of the Iranian Resistance – the MEK – in Ashraf 3. The events in Ashraf 3 were learning experiences,” said Irish Senator Gerry Horkan.
“The regime’s repression is failing. Resistance Units continue to mobilize anti-regime protests and chant ‘Death to Dictator.’ I’m here to call on the Swedish government and the broader EU to stand with the Iranian Resistance and its leader Madam Maryam Rajavi,” he added.
“The EU must abandon its appeasement policy and adopt a firm policy toward Iran… I support the 10-point platform of Madam Rajavi and NCRI. The NCRI and Madam Rajavi are trailblazers for a better and prosperous Iran,” Senator Horkan continued.
“The religious dictatorship in Iran is a great threat not only to Iran but also to the Middle East region… The EU must end the impunity the regime has enjoyed in the past decades. It can do this by recognizing the 1988 massacre as a crime against humanity and bring its perpetrators to justice. Next, it must designate the IRGC and MOIS as terrorist entities. It is necessary to push back against the regime both at home and across the world,” he further stressed.
“The people of Iran will shape the future of Iran. You are here to give voice to their legitimate demands,” Senator Horkan told the protesters in Stockholm. 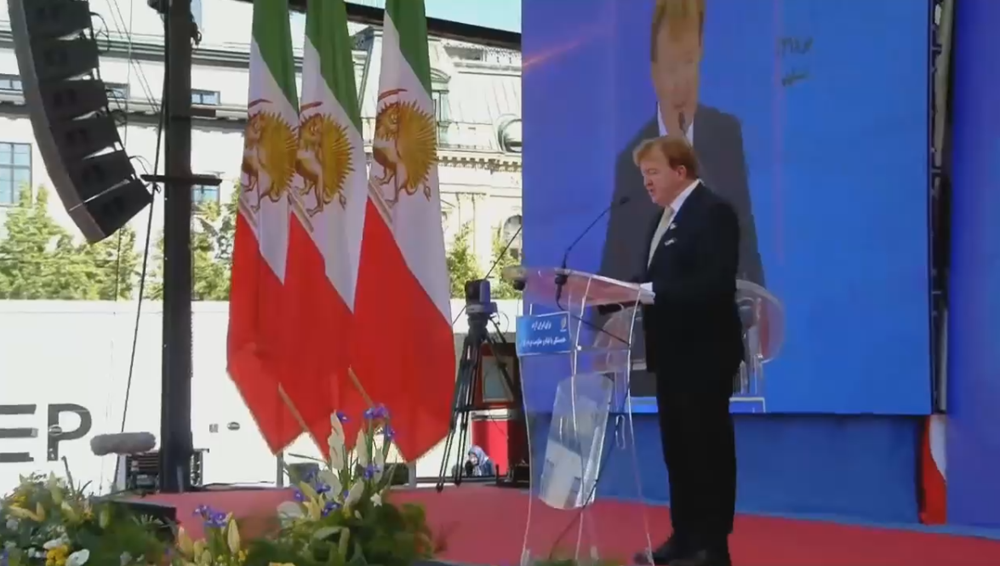 15.55: Former Irish Minister of State for Small Business John Perry tells the Free Iran rally in Stockholm:
“Yesterday, we saw that the Iranian regime is a threat to the world. The regime thinks it can extract more concessions by taking our ships hostage.”
“In the past four decades, this regime has been terrorizing its own citizens with impunity. Many of you are victims of that regime,” he added.
“I had the honor to visit Ashraf 3. We met the residents. We spoke to PMOI (MEK) members. We listened to your inspiring leader Mrs. Maryam Rajavi. With the dedication of the residents of Ashraf 3 and the leadership of Madam Rajavi, I have no doubt that you will achieve freedom and democracy for your people,” Sen. Perry added.
“Many international dignitaries have called on the EU to abandon the appeasement policy toward the regime and hold its leaders to account for their atrocities. I call for a European policy that supports the aspirations of the Iranian people for freedom,” he stressed.
“I call on the Swedish government to support the democratic alternative to this regime,” Sen. Perry concluded. 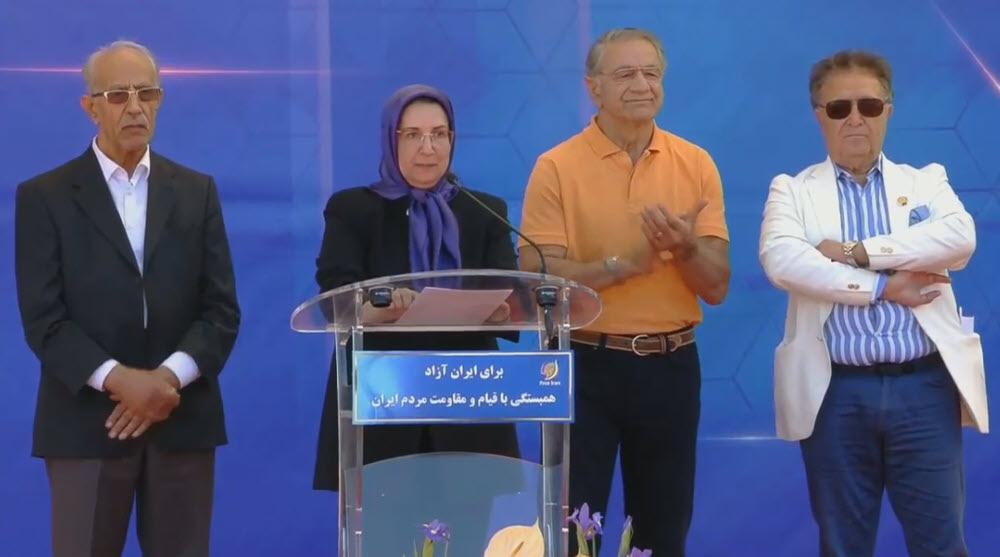 16.00: NCRI Secretariat Mahnaz Salimian tells the Free Iran rally:
“We are here to send a strong message to all those who are still dreaming of appeasing the Iranian regime and are thinking of constructive dialog with this regime. The first and last word of the MEK’s Resistance Units and the youth of Iran is the downfall of this regime.”
“This regime is trapped in a dead end and has no way out. The people of Iran and the Iranian Resistance are ready to answer to this situation. We tell European countries and the Swedish government that we don’t want anything but ending the appeasement policy and standing on the side of the Iranian people,” she added.
“For the Iranian people, any relation by the EU with the regime’s Intelligence Ministry (MOIS) and the Revolutionary Guards (IRGC) or with the regime in its entirety is a red line that must not be crossed. The MOIS and IRGC must be designated as terrorist organizations. All of the regime’s embassies must be closed and its diplomats expelled. The perpetrators of the 1988 massacre must be held to account,” Ms. Salimian concluded. “The regime must be expelled from the international community.” 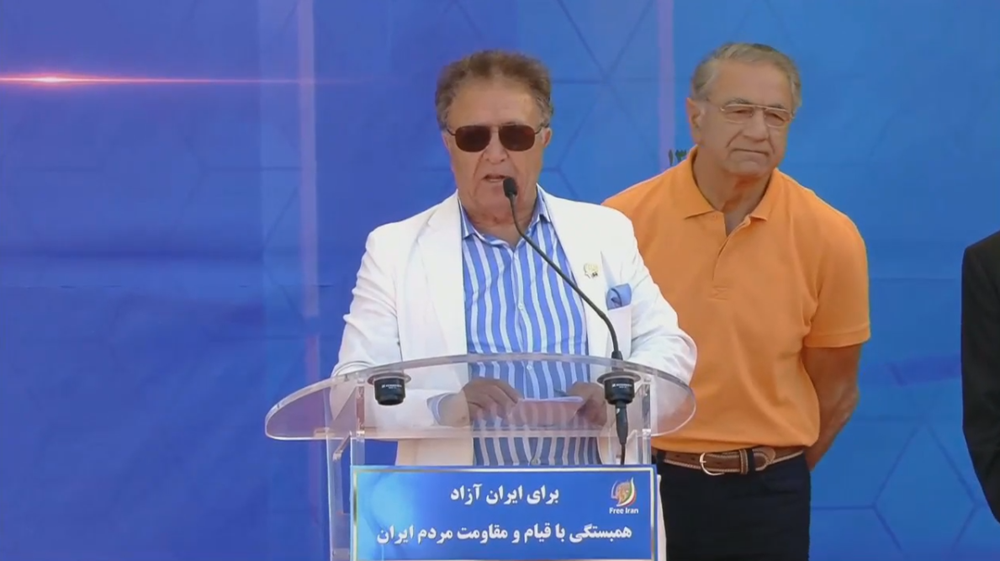 16.05: Parviz Khazaii, NCRI representative in Nordic countries, tells the Free Iran gathering:
“We the people of Iran have the right to resist, to have a resistance base such as Ashraf 3, and to have a leadership like Iranian Resistance leader Massoud Rajavi and NCRI President Maryam Rajavi, just as Europeans had great resistance leaders.”
“These mullahs are not only the enemy of Iran, but also the enemy of other countries across the world. They are using the name of Islam, but they have nothing to do with this religion,” he added.
“This regime is the number one enemy of humanity. Today, the Iranian people are at the forefront of the fight for humanity, because fundamentalism is going to expand culturally and militarily in the Middle East. It is threatening the stability and security of the world; it is threatening our democracies. This regime wants to destroy democracy just as Hitler and Mussolini sought to,” Mr. Khazaii stressed.
“To European governments, we say, stop appeasing these mullahs like former UK Prime Minister Neville Chamberlain did,” he concluded. 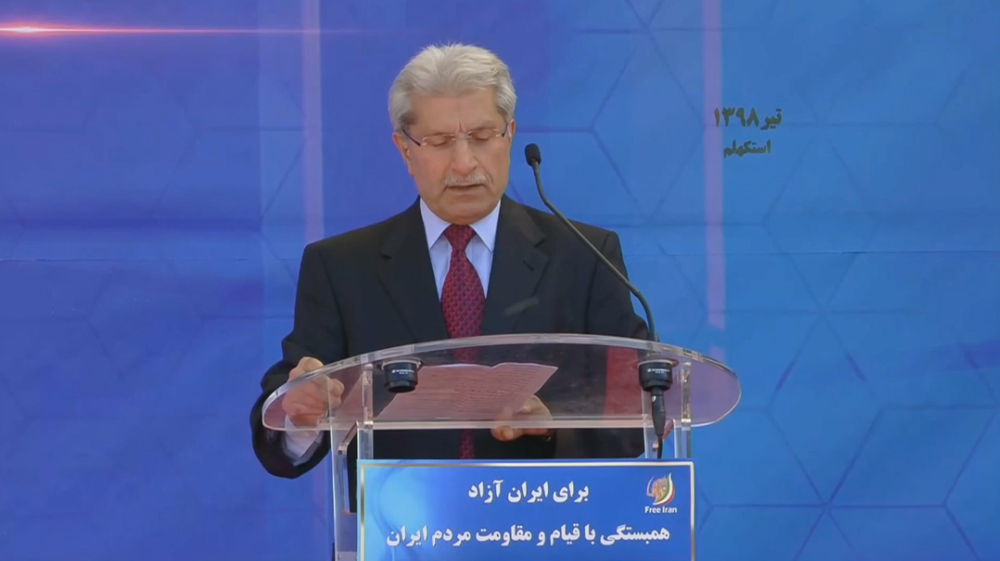