Louis Freeh: Only Iranian Resistance can bring freedom to Iran 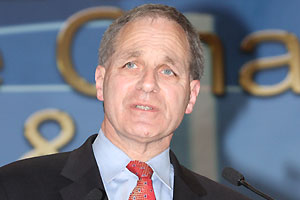 The Iranian Resistance is the only group capable of bringing democracy to the ‘evil and murderous’ regime in Tehran, former FBI director Louis Freeh has told a conference in Paris.

He also said the listed the People’s Mojahedin Organization of Iran (PMOI/MEK) as a terrorist organization as part of a policy to appease Mohammad Khatami in 1997. The PMOI was removed from the list in 2012 after 15 year long political and legal campaign.

Mr Freeh said in his speech on April 12: “There will be regime change. We don’t know when that will be but the MEK (PMOI) and Madam Rajavi you have the organization and more importantly you have the political will and you have the core democratic values that will lead this country and the people back into a great nation that is respected.”

He said the PMOI was listed as a terrorist group as a direct result of the Khobar bombing, when Hezbollah terrorists murdered 19 America airmen in Saudi Arabia in June 1996.

He added: “One of the direct results of mass murder of American service-people, ironically, was the United States of America putting the MEK, which has been the only agent for democracy and change and freedom in recent history in that country, putting that organization on the terrorist list, an absolutely completely political move at that time.

“I can’t find anybody in the FBI, and I happened to be there at the time, who was ever consulted by the State Department prior to putting the MEK on the terrorist organizations list. Why was it done? It was done because there was a feeling that there was a moderate running the country, Khatami, who was more responsible for the acceleration of nuclear enrichment program more than anyone else. So, there was an appeasement.”

Those who massacred the residents of Camp Ashraf and Liberty should also be brought to justice following a full UN investigation, he said.

Mr Freeh added: “There is the ability to prosecute and arrest and convict hundreds and hundreds of people who have committed these crimes and I predict that it is also part of the future of freedom of Iran. We cannot leave these crimes unanswered.

“So to the people out there who commit murder who attack Liberty who assassinate people… there is justice, there is an accounting.

“And if it takes five years or 20 years, that is also the future here and that should send a warning to the people who continue to the commit and plan crimes at the highest level.”