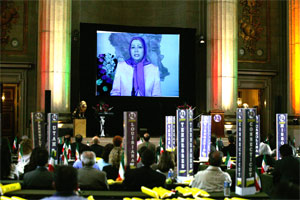 NCRI – Second national convention of Iranian-Americans for a democratic republic Iran based on separation of church and state was held on Thursday, May 25, at the historic Andrew Mellon Hall in Washington DC. Hundreds of Iranians from some 40 states participated in the event and a number of members of the House of Representatives, Senate and their assistants as well as distinguished political and human rights figures attended the gathering. A video message by Mrs. Maryam Rajavi, President-elect of the National Council of Resistance Iran to the Iranian convention was broadcast. The following is the full text of her message to the event:

Distinguished Senators, Members of the House,

Eminent personalities, advocates of peace and human rights who have gathered in the National Convention of Iranians in Washington, DC,

Hello and thank you all, especially my fellow Iranians who have gathered in Washington from all across the United States.

Today, the crisis over Iran has become the top concern for the international community.

No, it’s none of these. At its core, this is a confrontation between the Iranian people and the ruling religious fascism. This battle for freedom has continued for 27 years. By obtaining the nuclear bomb and changing the balance of power, the mullahs want to prevent the Iranian people from toppling them.  If this means taking the world to the brink of war and catastrophe, then so be it.

Two weeks ago, UN inspectors found traces of highly-enriched uranium from a site in Tehran that could be used to build nuclear bombs. Imagine this terrible prospect: nuclear weapon in the hands of a brutal dictatorship, which has executed 120,000 political activists, committed hundreds of terrorist attacks, meddled in Iraq and is openly trying to set up an Islamic Caliphate.

How could we stop this nightmare from coming true?

We have all heard many answers. But let me say, on behalf of the Iranian people and Resistance, that the religious fascism in Iran is the root cause of the current crisis. So a correct policy to deal with this crisis must include the idea of ending this dictatorship and establishing democracy in Iran.

A policy that allows the mullahs to continue their rule of terror in Iran is not just against the Iranian people’s desires, but will also fail to end the threats that this regime poses to peace and stability in the region. In the end, being soft on the mullahs will only increase the possibility of a war.

The ruling mullahs see the end of their regime in the rise of the popular movement and the Iranian Resistance. This is the correct solution because it relies on an organized Resistance with a vast social base.  The People’s Mojahedin Organization of Iran, the main component of the Resistance, is at the core of this movement. By advocating a tolerant and democratic Islam, it is the answer to Islamic fundamentalism.

We must not let the mullahs misuse the anti-war campaign as an excuse for their drive to obtain nuclear weapons. If they do, that would make war inevitable. If you want to defend world peace, you must also oppose the mullahs’ efforts to obtain the bomb.

The Iranian regime’s diplomatic missions abroad, agents of its Ministry of Intelligence and Security and the pro-mullahs lobbies in Western countries have been trying to sell the idea that the mullahs’ nuclear program is a national effort supported by the Iranian people. This propaganda has only one purpose: to prevent a decisive policy against the regime.

Let me say it loud and clear: the mullahs’ nuclear program is totally against Iran’s national interests and a vast majority of Iranians oppose it. From an economic, political and environmental perspective, these projects will have terrible consequences for the Iranian people. That’s why the regime has been hiding these projects even from its own parliament.

Democracy in Iran serves the interests of the peoples in the region and global peace and security. Today, U.S. leaders affirm that the policy of supporting dictatorships to uphold stability and security in the past 60 years was mistaken. At the same time, they correctly stress that "the rights of the Iranian people are denied by a number of unelected officials."

But even at this late hour, Western countries are keen to keep their bridges with this regime and are considering fresh incentives to offer it. They refuse to recognize the right of the Iranian people to resist against this tyranny and they continue to keep in place the unjust terrorist label against the Iranian Resistance that was meant to appease the mullahs.

The terror tag on the PMOI is the hallmark of a policy which has put the mullahs’ regime to be on the verge of obtaining nuclear weapons and domination of Iraq.

Beyond slandering a legitimate resistance, this label reflects the ongoing policy of concessions to the mullahs who are a threat to international peace and security.
For this reason, any policy that wants to defuse the threats posed by the religious fascism in Iran must first remove the terror label against the PMOI.

Our ancient nation and our proud resistance, whose roots are spread throughout Iranian society, have remained firm for 27 years in the face of the most ruthless repression. Despite all the difficulties, this resistance will finally open the path to democracy and freedom in Iran. The perseverance of freedom-loving women and men in Ashraf City in Iraq along the Iranian frontier and the brave uprising of Iranian women, workers, students and other sectors of society reflect the will for democratic change in Iran.

At a time when the world needs a united front and a consensus to act decisively against the mullahs and prevent them from obtaining nuclear weapons, Russia and China are sadly standing by this regime. But let’s not forget that Russian and Chinese support for the mullahs’ regime is one result of the opportunity created by years of Western appeasement of the mullahs.

Forming an international consensus on Iran strongly depends on a firm policy followed by the United States and Europe. So long as the West sends a signal of “business as usual” to Tehran by keeping the PMOI on the terrorist lists, so long as the regime’s meddling in Iraq is ignored, so long as the mullahs’ proxies are given a share in the political leadership of Iraq and so long as the flagrant human rights violations in Iran are ignored, the world community will remain divided.

For this reason, we insist on the following demands,

– The clerical regime must face sanctions by the world community.
– This regime is the enemy of the Iranian people and must be expelled from the community of nations.
– The leaders of this regime must be put on trial for crimes against humanity, including the massacre of 30,000 political prisoners.
– The PMOI must be removed from the terrorist lists. The Iranian people’s Resistance must be recognized.

My best wishes to all of you at the National Convention of Iranians in Washington. God bless you.