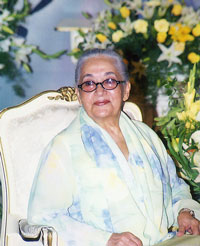 THE HUFFINGTON POST – By Ali Safavi- Marzieh, Iran’s most celebrated 20th century female singer, who later in her distinguished career gave voice to millions of disenchanted Iranians yearning to be free of clerical dictatorship, died on Wednesday in Paris. She was 86.

THE HUFFINGTON POST – By Ali Safavi- Marzieh, Iran’s most celebrated 20th century female singer, who later in her distinguished career gave voice to millions of disenchanted Iranians yearning to be free of clerical dictatorship, died on Wednesday in Paris. She was 86.

The renowned Iranian diva’s captivating voice and charisma had brought her extraordinary fame and an international audience that included Queen Elizabeth II, French President Charles De Gaulle, German Chancellor Konrad Adenauer, and US President Richard Nixon. She recorded or performed over 1,000 songs in her 60-year career.

Ashraf os-Sadat Morteza’i, better known as “Marzieh,” was born on the first day of spring in 1924 into a spirited family of artists, and revealed her remarkable musical gift at a very young age.

Schooled by the musical geniuses of her time, such as Abolhassan Saba and Esmail Mehrtash, the multi-talented singer’s artistic prowess initially spilled over into the world of opera. In 1942, at 18 years of age, Marzieh played the leading female role in the opera “Shirin and Farhad,” a story perhaps best described as Iran’s version of Romeo and Juliet. The performance won her countless accolades and a celebrity status.

Before the 1979 revolution, her career took her all over Iran and the world, including Turkey, Austria, Germany, Britain, and the US, among other places.

But, with the revolution of 1979 came a misogynistic regime. Marzieh, like all Iranian female vocalists, was banned from public performances and forced into a painful seclusion.

“It was at that time that I picked up the Setar,” she later explained. The Setar, Marzieh said, is an instrument that has, in Iranian tradition, the metaphorical qualities associated with a sense of solitude. “After 1979, it became my friend,” she added.

Fifteen aggravating years later, Marzieh left Iran. In 1994, while in Paris, she was introduced to Iranian exiles campaigning for democratic change, most notably to the main opposition People’s Mojahedin Organization of Iran (PMOI/MEK) and the broader coalition of NCRI. Marzieh was particularly impressed with the charismatic woman that led the NCRI as its President-elect, Mrs. Maryam Rajavi, and decided to join the coalition.

Her decision to use her fame to shine international spotlight on appalling human rights abuses in Iran inflamed the ruling theocracy. Hoping to coerce her into another period of seclusion, the regime terrorized her relatives still in Iran and even imprisoned her daughter. Marzieh, however, refused to give up support for the cause of democracy in Iran.

From 1994 until 2006, Marzieh performed before sell-out audiences in Royal Albert Hall and Earl’s Court in London, The Olympia in Paris, The Pantages Theater in Hollywood, and The Babylon in Iraq. She also held concerts in Dortmund, Dusseldorf, Stockholm, Copenhagen, Norway and Brussels. The latter was a joint performance with Miriam Makaba in a “Voices of Peace Concert” organized the legendary violinist Yehudi Menuhin.

As an Iranian, she felt proud that some of her compatriots had “sacrificed everything” to “free their people.” She was particularly impressed with the PMOI’s dedication to democracy and in the late 1990s, even traveled to Iraq to meet thousands of the its members living there. In fact, she performed her first concert after a 15-year silence in Camp Ashraf. She returned to France just before the war broke out in 2003.

If a musical performance was thought to be like a sculpture, Marzieh once exclaimed, “the composer would build the mould, the poet would provide the material, and the singer would breathe life into it.”

In her signature songs, the melodic sounds of Persian instruments offered the mould while vivid lyrics about freedom, peace and humanity gave the raw material. Then, Marzieh’s mesmerizing voice, delivered with tempered pride, unbridled passion, and a contagious sense of purpose, breathed new life into the suppressed sentiments and aspirations of a nation refusing to surrender to tyranny.

Marzieh sang about the arduous and blood-stained road already traveled, the thousands of lives lost on the way to freedom and the multitude of free minds still behind bars; but she also sang about a bright future, the inevitable rise of the Iranian people’s phoenix from the ashes.

She was, in many ways, much more than a national icon rising to the occasion at a particular historical moment; her crowning achievement was her ability to embody the quintessential independent Iranian artist whose free spirit has proved to be unconquerable by centuries of recurring dictators. That is why her music touches so many millions of Iranians and will forever be shielded from demise with an organic national sentiment.

In a speech after her decision to leave Iran, she said, “We shall continue to resist, until the day of hope, life and democracy returns to Iran. We expect all those who love democracy to help us.”
She then summed up the painful realities in Iran through her personal experience, saying, “I was like a canary or a song bird. The butchers ruling over Iran stopped me from singing for fifteen years.” But, “a canary lives to sing.”

And so, it is with unimaginable sorrow that the Iranian people watch their beloved Marzieh fly away into the eternal skies. Yet, in their millions of tearful eyes, restless hearts and euphoric memories, the people of Iran will continue to watch Marzieh live on, sing and promise a free Iran that will one day itself sing the anthem of love and world peace.

Ali Safavi.Member of Iran’s Parliament in Exile; President of Near East Policy Research