Mrs. Rajavi: Solidarity with the Iranian people is a realization of Dr. King’s “dream” 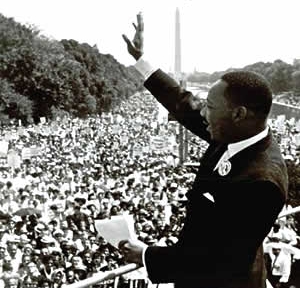 On the occasion of Martin Luther King Day

NCRI – The President-elect of the Iranian Resistance, Mrs. Maryam Rajavi, extended her congratulations on the occasion of Martin Luther King Day to all freedom-loving people across the world, especially in the United States.

Mrs. Rajavi paid homage to the memory of a man, who endeavored for peace, justice and friendship under difficult and unjust conditions. Now, 40 years after his heartbreaking assassination, the world misses his great character and fortitude even further. In paying tribute to Dr. King today we pay tribute to his ideals.

His remarks from a Birmingham jail in April 1963, when he said, "Injustice anywhere is a threat to justice everywhere," still resonates among us today, Mrs. Rajavi added.

Today, the greatest injustice is being perpetrated in Iran under the pretext of religion by the clerical dictatorship.

These words are shared today by many across the world about the theocracy ruling Iran which has subjected the Iranian people to a gender and religious apartheid. Truly, if the religious fascism in Iran did not enjoy the active political and material support of Western countries in the past two decades, it could not have committed so many atrocities against the Iranian people and in the Middle East region.

Let me recall Dr. King’s words on Human Rights Day in New York City in 1965, when he emphasized, "The struggle for freedom forms one long front crossing oceans and mountains. The brotherhood of man is not confined within a narrow, limited circle of select people. It is felt everywhere in the world, it is an international sentiment of surpassing strength and because this is true, when men of good will finally unite they will be invincible."

And today, the Iranian people, who have lost 120,000 of their beloved children to political executions in the past three decades, are part of this "front crossing occasions and mountains". Today in Iran, public hanging and torture of citizens, stoning of women to death and medieval punishments such as limb amputation and eye gouging are routine injustices.

Has the time not come for global solidarity with the Iranian people in their valiant struggle for freedom and human rights? Such solidarity is in part a realization of Dr. King’s "dream".