NCRI’s June 20 Conference: 39 Years of Resistance for a Free Iran

The Iranian Resistance’s supporters and renowned western politicians from 2,000 locations across the globe joined a virtual conference held by the National Council of Resistance of Iran (NCRI) on June 20, marking the beginning of the 40th year of resistance against the mullahs’ regime.

Participants, on the Day of Martyrs and Political Prisoners, paid tribute to over 120,000 martyrs fallen for freedom, mostly members and supporters of the People’s Mojahedin Organization of Iran (PMOI/MEK), and political prisoners who have been persevering on the cause of democracy in the regime’s dungeons. The Participants emphasized their support for the Iranian Resistance and the Iranian people’s struggle for regime change in Iran, as well as the establishment of democracy and a republic based on universal suffrage.

The keynote speaker of this event was Mrs. Maryam Rajavi, the NCRI’s president-elect. Mrs. Rajavi said: “The overthrow of the clerical regime is the firm demand of the Iranian people and the uprisings in November 2019 and January 2020 represented the people’s burning commitment to implement it. With their protests and strikes, and the activities and operations of Resistance Units, every day, the Iranian people move closer to overthrowing the regime. It is for the realization of this goal that political prisoners continue to persevere in prisons across Iran and stand up to Khamenei’s henchmen.” 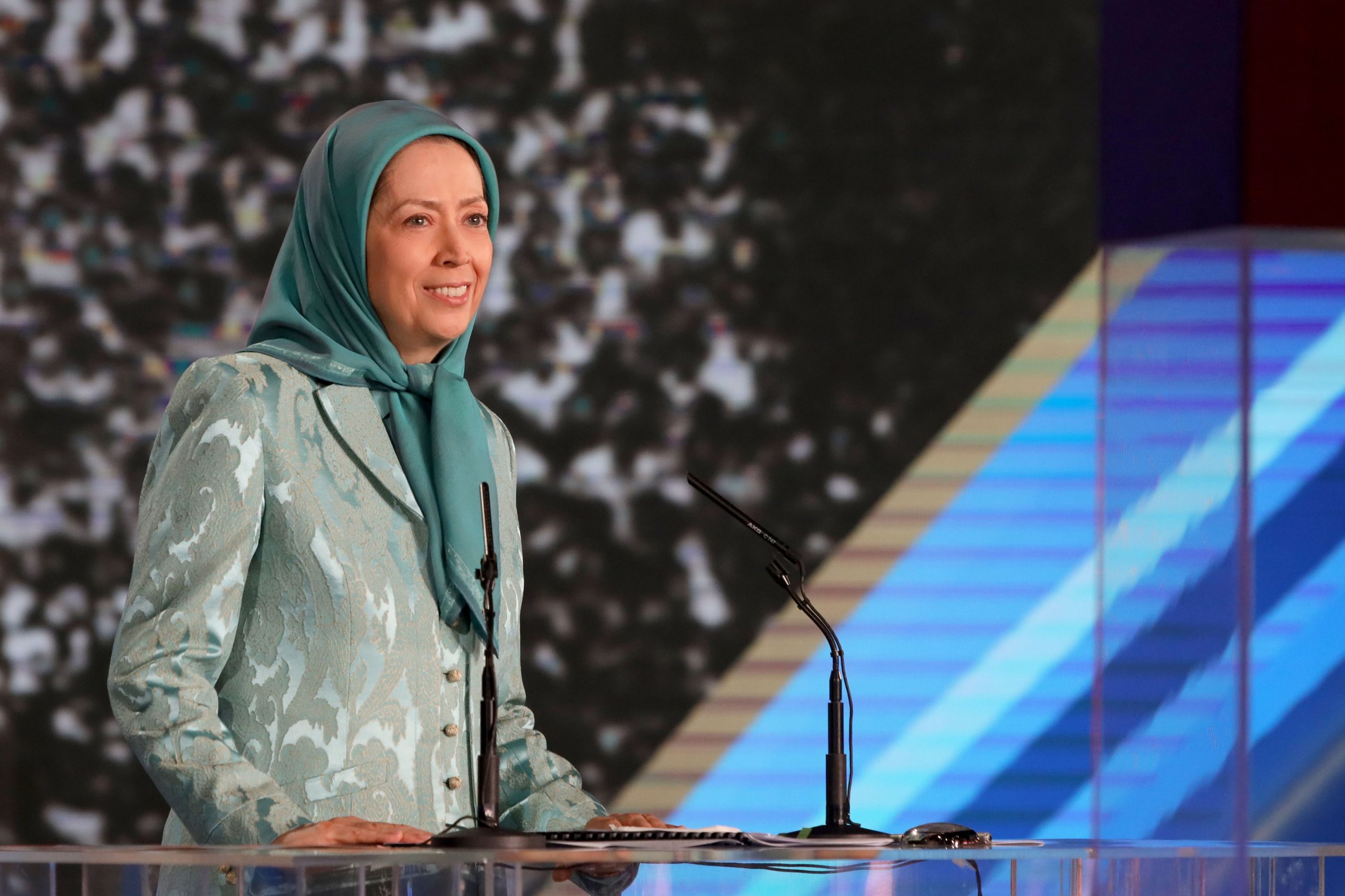 “It is up to the international community to hear this message: We have always said and reiterated that this regime should not be allowed to obtain even a single bullet; it should not pocket even a single dollar in oil revenues and it should not spend even a single dollar out of revenues that belong to the Iranian people. The Iranian Resistance has also emphasized since a long time ago that it seeks the restoration of the six UN Security Council resolutions against the regime. We emphasize the extension of international sanctions against any form of weapons trade with the regime,” Mrs. Rajavi added.

While underlining the need to hold the regime’s officials accountable for their crimes, particularly for murdering over 30,000 political prisoners during the 1988 massacre and killing over 1500 youth during the nationwide Iran protests in November 2019, Mrs. Rajavi said: “The global community must recognize the right to resist against the religious tyranny by the rebellious youth, Resistance Units, and the Iranian people.”

“Allow me to inform the Iranian people that the ruling theocracy’s extensive two-year conspiracies and efforts to help its arrested diplomat in Belgium have so far proven futile, owing to a series of legal initiatives and a plethora of evidence, documents, and testimonies. After a two-year investigation, the first public trial will soon be convened. Precisely two years ago, on June 30, 2018, the clerical regime planned a major massacre, perhaps the greatest massacre during the Resistance’s gathering in Villepinte, Paris, which was thwarted at the last minute and the terrorists were apprehended. Obviously, in the past two years, the Iranian regime spared no effort and pressure to secure the release of the terrorists and the closure of the file. But it failed to prevent the continuation of the investigation and the start of the trial. So far, this is a victory for all those combating terrorism,” Mrs. Rajavi noted. This was only the beginning, and the regime’s leaders must face justice as the greatest perpetrators of terrorism in the world today, as should their agents and mercenaries inside and outside Iran, added Mrs. Rajavi, pointing to the regime’s ongoing conspiracies against the MEK and the NCRI.

“To be in this struggle in the last 30 years has been one of the proudest fights of my life. When the history of the new Iranian revolution will be written, they will be proud of the leadership and decisions made by the Iranian Resistance. In every city and street across the nation, slogans and statements are coordinated and brought to the movement. The MEK and Mrs. Rajavi are virtually welcomed in most capitals across the world,” said former American Senator Robert Torricelli.

Baroness Verma told the event: “The world is witnessing the rejection of dictatorship in anti-regime protests. It is vital to stand up to suppression and tyranny. The UK has an opportunity to show that there is a viable alternative to the mullahs’ regime. The people of Iran deserve a prosperous future. No government, group, or individual must rest easy until the people of Iran enjoy freedom. We remain with you; we will be there in celebration with madam Rajavi and all of you.”

Rita Süssmuth, former President of the German Bundestag, said: “You’re a bright example, Mrs. Rajavi. Your main goal is equality and equal value of men and women, in leadership positions, to show people we are not without power. The equality of men and women is an important chapter for freedom in Iran or any other country in the world.”

“The mobilization of youth as never before is your victory. Ashraf 3 is your victory. Nothing can prevent your greatest victory. We are together, yesterday, today, and tomorrow,” said Rama Yade, former French Minister of Human Rights.

Michele de Vaucouleurs, Member of France’s National Assembly, said: “I am impressed by the uprisings of Iranian women and girls who are the victims of the regime’s misogynist rule. Honor crimes in Iran show the misogyny of the mullahs. The constitution of the theocratic government protects these crimes.”

Antonio Tasso Italian MP also told the NCRI’s conference: “Our states must condemn the leaders of this regime who have killed political prisoners in 1988 and protesters in 2019. We cannot accept the appeasement attitude. The European Union must take a step forward. We must stand with the Iranian people,”

“It’s 40 years since the people’s revolution has been hijacked by the mullahs. They are twisting and distorting religious beliefs for their own power. Throughout these years, the NCRI has survived. The regime’s Ministry of Intelligence and Security (MOIS) has admitted that it employs agents against the PMOI because of the growing support for the opposition. It does not matter what the regime does. It is finished,” said British MP Steve McCabe.

“Since the beginning, the mullahs’ regime betrayed the trust of the Iranian people. Thanks to evidence gathered by the MEK, we know the regime has executed 120,000 opponents since 1979. But the people of Iran have never accepted the regime in the past 40 years and have resisted. We are proud to be part of this resistance. The people are voicing for the overthrow of the mullahs’ regime. Their slogans are: ‘Reformers, hardliners, the game is over,’ ‘Death to Khamenei,’ and ‘The enemy is right here, not in America.’ This is in line with the calls made by the MEK,” said Ingrid Betancourt, former Colombian Senator and presidential candidate.

Faisal Odeh Al Rfouh, the former Jordanian minister and Professor at the University of Jordan, said: “Since the beginning of the novel coronavirus outbreak, the regime has abandoned the people and does not even declare how many people have been killed. The people of Iran are increasingly dying of COVID-19. Tens of thousands of prisoners are dealing with coronavirus. Some tried to flee prisons to escape COVID-19 infection, but the regime arrested and executed them.”

MEK supporters in Europe and representatives of the Iranian community abroad reiterated their support for the Iranian Resistance and vowed to be the voice of the Iranian people in their quest for freedom and democracy.

#Iran: International Online Conference With the Presence of Mrs. Maryam Rajavi at Some 2,000 Locations Around the World
Saturday, June 20, 2020 #FreeIran2020 https://t.co/YtTHfwaxXm 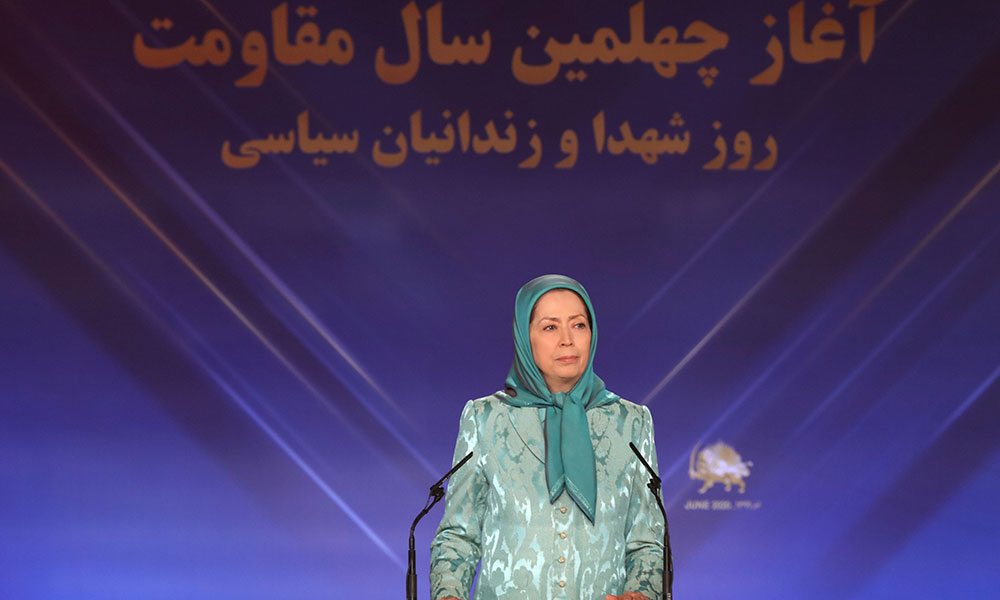 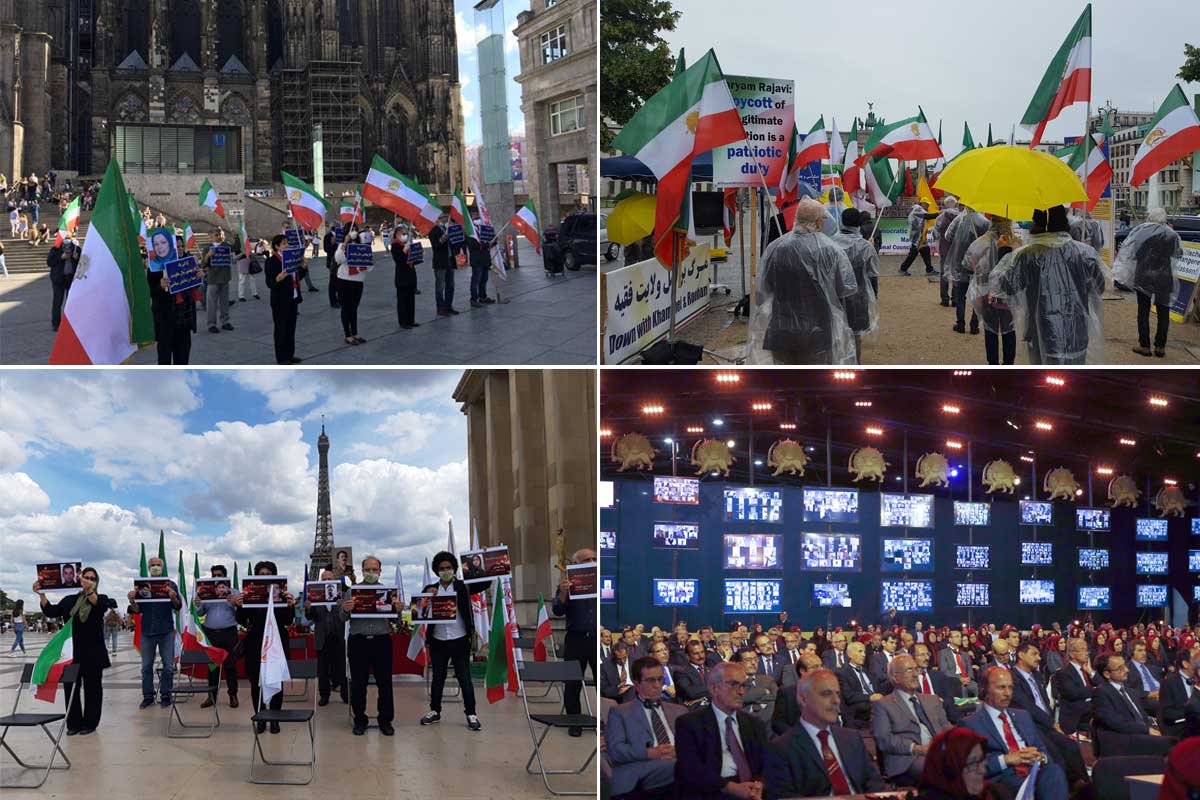 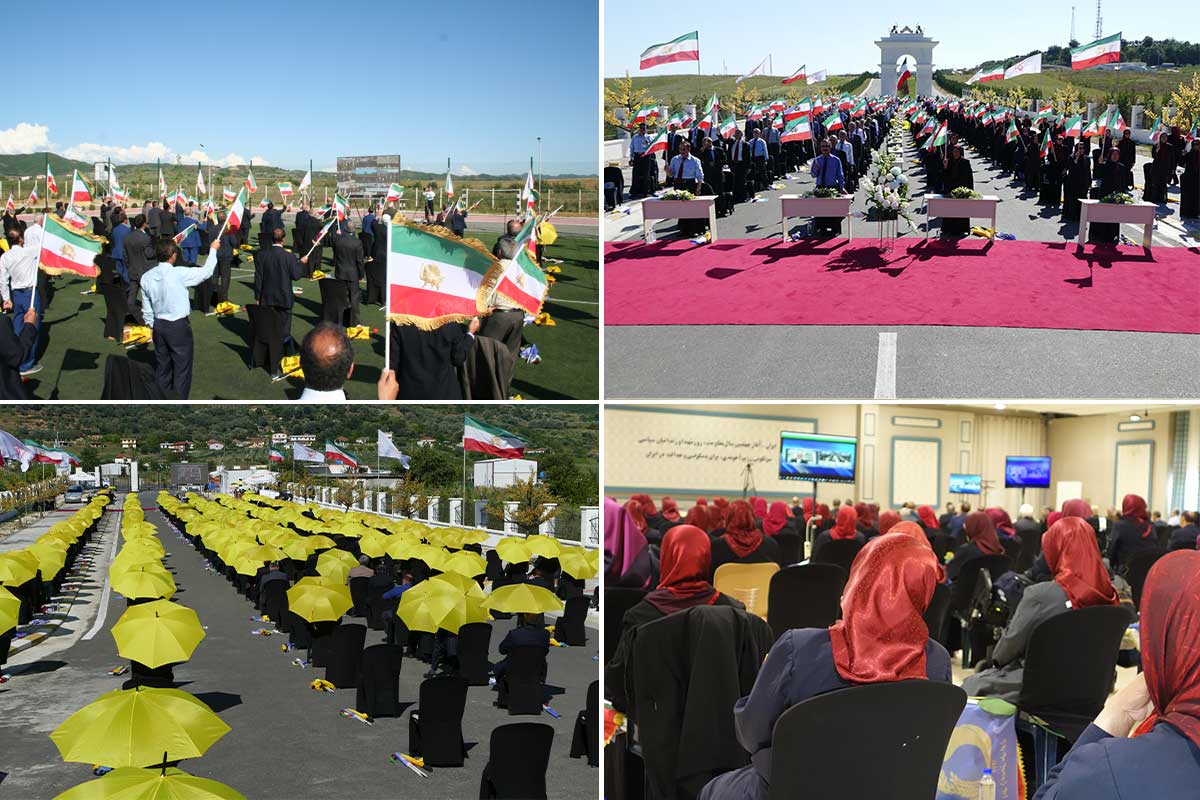 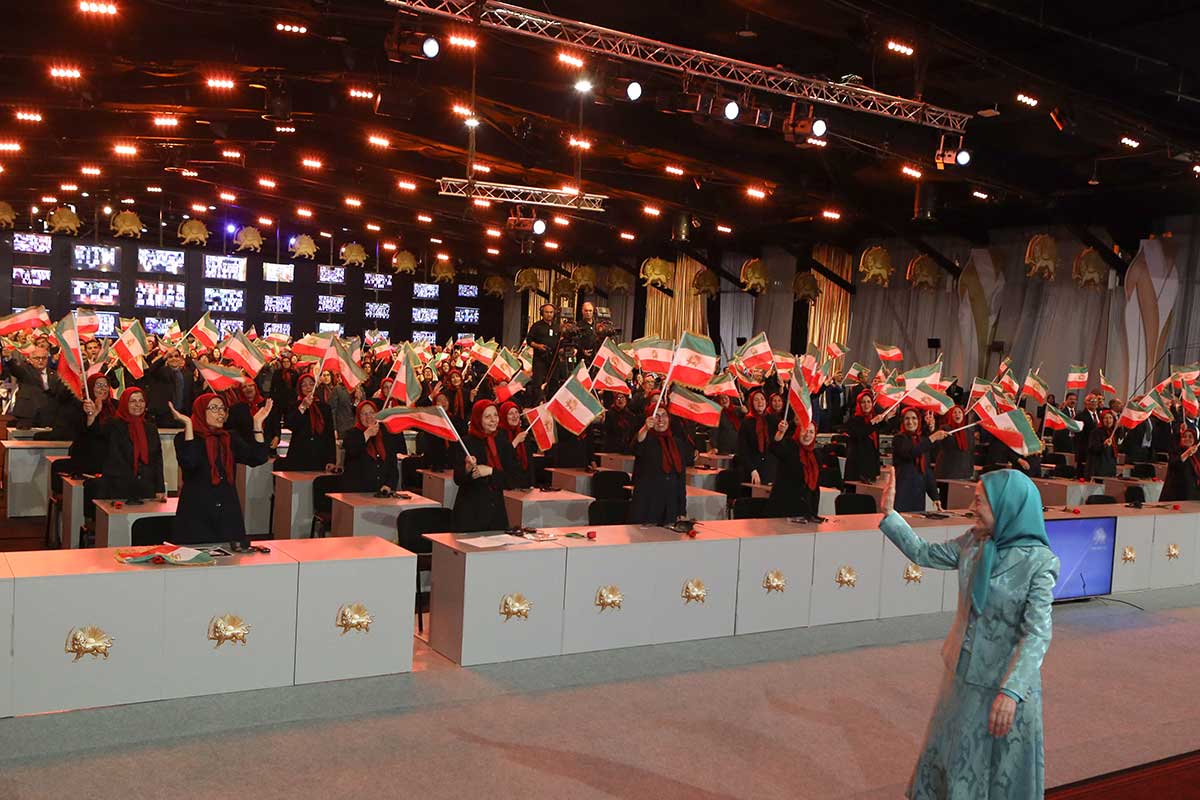