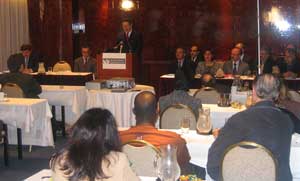 New York
In a press conference in New York organized by the Association of Iranians in New York on May 25, Mohammad Allafchi, chair of the association, introduced a group of witnesses who, as former PMOI members or supporters, spent some time in the group’s bases in Iraq. They had come from various European countries and the U.S. Speaking on their behalf, Reza Kafi said that these individuals had come to the press conference to testify against the allegations raised in the HRW report.
Rabbi Daniel Zucker described the report void of any credence for sources used and methodology and asked why HRW was promoting a wrong policy of maintaining the PMOI on the terrorism list while thousands of Parliamentarians across the world were calling for its removal.