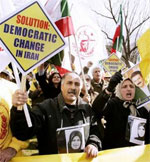 By Philip Dine
St. Louis Post-Dispatch — Iranian-Americans rallied in front of the White House Thursday to urge U.S. support for efforts by opposition forces in Iran to overthrow what they view as an oppressive regime in Tehran intent on acquiring nuclear weapons.
The demonstrators, including about 200 from Missouri, said that negotiations with the Iranian government won’t succeed, and that U.S. military action should be avoided. The third – and best – solution, they said, is for the United States to remove Iranian opposition forces from the State Department’s terrorist list, unfreeze their assets and allow them to rearm and take on the
Iranian government.

Hundreds of signs in the crowd supported the National Council of Resistance of Iran. The group’s military wing was put on the terrorist list by President Bill Clinton in 1997, protesters said, in an effort to curry favor with Iran’s relatively moderate president at the time and to improve U.S.-Iranian relations.

But now, with Iranian President Mahmoud Ahmadinejad calling for a world without Israel and the United States, as his country moves toward acquiring a nuclear capacity, the demonstrators said the urgency of standing up to Iran’s government is greater than ever.

"We are here to support democratic change in Iran," Kasra Nejat, president of the Iranian-American Cultural Association of Missouri, said in an interview. "We are here telling President (George W.) Bush to adopt a new policy – regime change in Iran."

Nejat and others made it clear they don’t want American soldiers in Iran but rather seek to have the opposition force’s assets unfrozen by U.S. authorities and its arms returned. The terrorist designation is "handcuffing the resistance, said Nejat, a businessman in St. Louis who graduated from the University of Missouri at Rolla in 1983, five years after leaving Iran.

Azam Shahriary, a biologist from Ellisville who left Iran two weeks before the hostage crisis in Iran in 1979, said if the "U.S. is really fighting terrorism, it cannot tie the hands" of the resistance within Iran.

Mazeyar Attaran, a recent high school graduate from St. Louis, attended the rally with his mother and several friends "to support the Iranian people and speak against the regime that’s in control right now."

Rabbi Daniel Zucker of New York, chairman of Americans for Democracy in the Middle-East, roused the crowd with an emotional speech during which he blew the Jewish shofar or ram’s horn and proclaimed, "Next year in a free Tehran."

Rep. William Lacy Clay Jr., D-Mo., who held a briefing with Iranian-Americans in October, said Thursday he supports the rally’s efforts and called the resistance "a pro-democracy group" that has nothing to do with terrorism. The State Department refused to comment after the rally.

Professor Raymond Tanter of Georgetown University, a member of the National Security Council in the Reagan administration and chairman of the Iran Policy Committee, told the crowd he is urging the White House to remove the terrorist label from the opposition group in Iran.

In a conference call Thursday, Sen. Evan Bayh, D-Ind., said he would introduce a Senate resolution seeking "strong, comprehensive sanctions against the government of Iran" over the nuclear issue before time runs out.