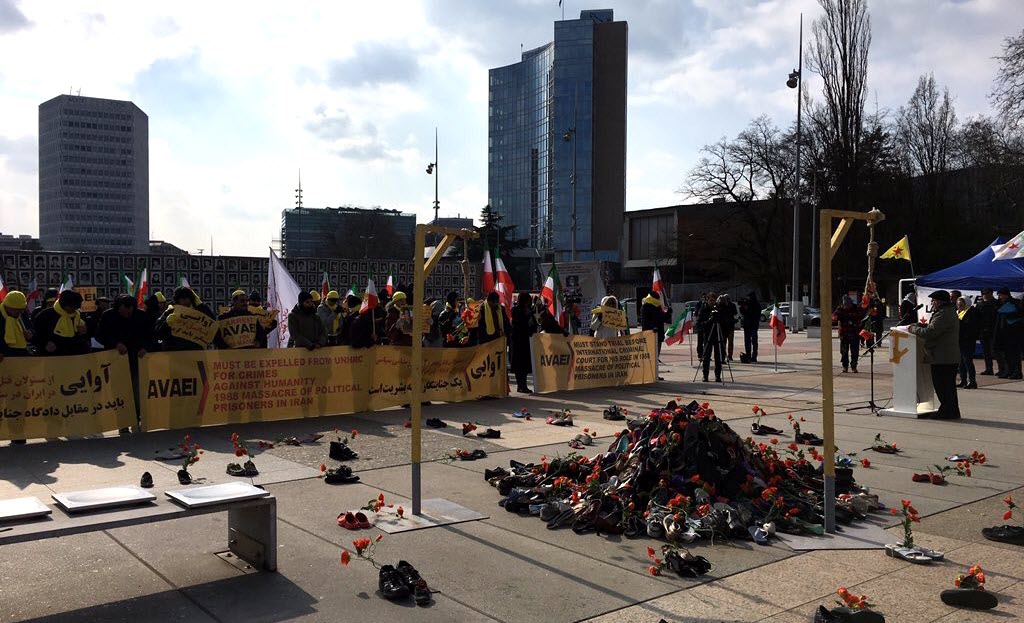 NCRI – The Iranian community in Switzerland, supporters of the National Council of Resistance of Iran (NCRI), on Tuesday held a rally in front of the UN Headquarters in Geneva against Alireza Avaei, Justice Minster of the clerical regime, at the Human Rights Council.

Avaei has been directly implicated in the massacre of 30,000 political prisoners, the majority of whom were members and supporters of the main opposition movement, the People’s Mojahedin Organization of Iran (PMOI/MEK), in 1988. He was a member of the Death Commission in Khuzestan Province that sent many political prisoners, including juveniles, to execution during the massacre.

Scores of families of victims of the 1988 massacre took part in Tuesday’s protest.

The Geneva protest continued for several hours despite the bitter cold weather. The protesters waved Iranian flags with the ‘lion and sun’ insignia.

The protest included an expansive photo exhibition of the victims of the 1988 massacre and a street display depicting the massacre.

One of the banners read: “Avaei should stand trial before international criminal court for his role in massacre of political prisoners in Iran in 1988.” “Avaei must be expelled from UN Human Rights Council for crimes against humanity,” was another banner that was carried by the protesters.

Supporters of the NCRI who took part in the protest said Avaei’s address to the Human Rights Council would make a mockery of the United Nations and its human rights mechanisms. They called it a total disgrace. They stressed he should stand trial for his role in a crime against humanity.

Avaei’s name was added to the European Union’s sanctions list in October 2011 for human rights abuses and direct participation in the torture and massacre of the political prisoners.
While blacklisting Avaei in 2011, the EU stated: “As President of Tehran Judiciary he has been responsible for human rights violations, arbitrary arrests, denials of prisoners’ rights and increase of executions.” Avaei’s name is also on Switzerland’s sanctions list.

The NCRI had initiated a major political, public opinion, and legal campaign against his presence at the UN since last week.

Marc Bonnant, a distinguished Swiss lawyer, submitted a complaint on behalf of the NCRI to the Swiss General Prosecutor, Michael Lauber, on Monday calling for prosecution of Avaei for crimes against humanity. The complaint file that contained the criminal record of Avaei stated that welcoming him in Switzerland “profoundly contradicts morality and human rights”, and that “the UN Human Rights Council is wrongly welcoming him to speak ironically about human rights.” The complaint added that Avaei’s record “has earned him financial sanctions within the European Union”, and that he is on the Swiss blacklist for “human rights violations, arbitrary arrests, denial of the rights of prisoners and executions.”
Scores of prominent human rights organizations including France Libertes and Hands Off Cain condemned Avaei’s presence at the UN and called for the annulation of his speech.

Nikki Haley, the US Ambassador to the UN, on Sunday condemned Avaei’s misuse of the UN forum and said: “Mr. Avaei is responsible for some of the worst human rights violations in Iran, including preventing political freedoms and promoting repression, violence, and extrajudicial killings of political prisoners.”

“The Human Rights Council should be ashamed to allow Alireza Avaei to address its membership. Yet again the Council discredits itself by allowing serial human rights abusers to highjack its work and make a mockery of its mandate to promote universal human rights,” said Ambassador Haley.

The U.S. Delegation to the UN Human Rights Council in a statement on February 27 said: “The United States is appalled to learn that the government of Iran is sending its Justice Minister, Seyyed Alireza Avaei, to address the UN Human Rights Council. Minister Avaei oversaw the summary executions of Iranians in the late 1980’s. As the recent head of the Tehran judiciary and current Minister of Justice, Avaei oversees systematic arbitrary arrests and detentions of Iranians engaging in peaceful political and civic activism, and imprisons them in a network of facilities notorious for suspicious deaths, the use of torture, and denial of medical care. Iran’s dire human rights environment rightfully receives continued Human Rights Council criticism and deserves more.”