Regime Change Could Only Come About by Iran’s People and Their Resistance – Remarks by Sen. Joe Lieberman

This wrong policy gave the regime a chance to continue its domestic oppression, export of terrorism and killing dissidents abroad. Designating the Iranian opposition People’s Mojahedin Organization of Iran (PMOI/MEK) and National Council of Resistance of Iran (NCRI) as foreign terrorist organizations was only meant to appease the ayatollahs in Tehran. Although the Iranian Resistance was able to revoke all these allegations after long legal battles, these unjust designations paved the way for the murder of MEK members in Iraq and the arrest, imprisonment and execution of MEK supporters in Iran, and most notably delayed the cause of regime change, because the leading force was shackled.

The regime’s ominous rule has brought nothing but destruction for the Iranian people. The rising COVID-19 death toll in Iran, which is the direct result of the regime’s deliberate inaction and cover-up, is an undeniable fact of the Iranian people’s suffering under the mullahs’ regime. The economic hardships and the regime’s brutal oppressive policies, along with its terrorism should not be forgotten. On the other hand, after 40 years of pressure, Iranian society has turned into a powder keg. The nationwide Iran protests in November, public boycott of the regime’s sham parliamentary elections in February and ongoing protests by people from all walks of life across Iran are great indicators of the Iranian society’s restiveness.  Therefore, the regime intends to use the novel coronavirus to control the society and spread despair among people by allowing more people to die.

In such a situation, the MEK’s Resistance Units are playing an important role in spreading a message of hope and resistance among the Iranian people. They have also shown their capability to lead the Iranian people’s uprising during the November protests.

Now, the international community must stand with the Iranian people and their organized Resistance movement. In this regard, the NCRI held its annual “Free Iran Global Summit,” for three days virtually. Over 1000 renowned politicians from different political tendencies in over 100 countries called this conference “unprecedented,” “historic” a “strong message of hope,” showing there is viable alternative to the mullahs’ regime. This alternative was able to connect over 30,000 locations together and removed the obstacle of the pandemic to continue the struggle for freedom in Iran.

One of the participants of this event was former U.S. Senator Joe Lieberman. He reiterated that regime change “will come from the resistance fighters in Iran.”

Below is the full text of Senator Joe Lieberman’s speech at the “Free Iran Global Summit:” 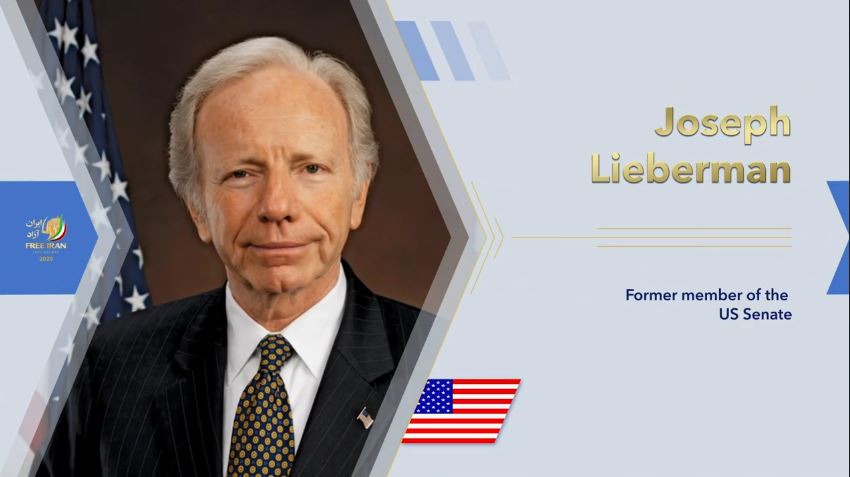 I am really honored to be with you here today via Zoom. I bring greetings from my wife Hadassah who was thrilled to be with me in Ashraf last year. And I must say it was humbling because when we left, I was convinced that Hadassah was much more popular than I was. But she sends her love and her support to you.

It is an honor to be with the National Council of Resistance of Iran, the MEK, and particularly with your great leader, my dear friend, Maryam Rajavi. This is an historic event. I think we’ve made it into the Guinness Book of World Records, I don’t believe there has ever been this large a global meeting on Zoom in history. So, it is really impressive. And let me tell you that an event like this does not happen without not only hard work but an organization such as the NCRI that once again has proven its determination, its competence, and its persistence to do things that others would never try to do. And that happens because of the commitment to principle and purpose that’s part of the NCRI.

Of course, no organization succeeds without a strong leader. And this organization has the strongest of leaders in Maryam Rajavi, a woman of faith and principle and intellect, a modern woman, a woman of strength, and someone who most of all loves the people of Iran and works with a tremendous determination for that day that is coming soon, and it’s the purpose of our gathering today, when the people of Iran will be free. So, I am proud to join you in saying I stand with Maryam Rajavi.

Now I want to say to all of you who are a part of this historic meeting that you have also joined the journey of history. This is the struggle that has gone on since creation between tyranny and freedom, and you have joined the side of freedom, freedom fighters all. And I say it started with creation because from the creation every person on earth was given the birthright, the right by birth to be free. This is what the patriotic founders of America put into the first words they wrote in their Declaration of Independence in 1776, that there are self-evident truths, and one of them is that every person has the right to life, liberty, and the pursuit of happiness, not as a result of the great men who wrote that document or the philosophers of the Enlightenment, but as an endowment from our creator, an endowment from God. That is what motivated them, the heroes, the patriots of the American Revolution, to take on a fight that no one thought they could win. They were fighting for their freedom from the most powerful empire of the day, the British Empire. The same was true for the French Revolution in the 19th century, and the tremendous resistance to Nazism and fascism during the 20th century, and of course the people fought against all odds against the tyranny of the Communist Soviet Union and prevailed. All of you who are here today around the world and particularly the heroic resistance fighters in Iran, have put yourself in the path of those who preceded, fighting against odds that others thought were insurmountable, and yet emerging victorious as you are today.

You know, a great American leader, Dr. Martin Luther King, famously said the arc of the moral universe bends slowly but it bends toward justice. But he also understood, and he said that each of us has the capacity to bend that arc more quickly toward justice and freedom than it otherwise would bend. And that is what you are doing today. I am proud as an American to stand with the NCRI, the MEK, and Maryam Rajavi. Your enemy, this fanatical, aggressive, oppressive, tyrannical, terrorist-supporting, corrupt regime in Iran is our enemy. As America looks for ways to change this regime, to end this threat to our security from the regime in Iran, there is no better ally, there is no more natural alliance than with the NCRI. Is there another opposition group, frankly are there many groups in the world who could have organized a meeting like this globally? I do not think so. Is there another group in opposition to the Iranian regime, on behalf of the Iranian people, with support in Iran, anywhere near the NCRI? No. So, I say to the skeptics and the doubters and the paid lobbyists against the NCRI, what we are doing in America, those of us who so strongly support the NCRI and Maryam Rajavi, who you will hear during this day, is doing what is not only the interest in our universal values of freedom as expressed in the Declaration of Independence, but in the interests of the security of the American people today whose security is threatened every day by the fanatical regime that controls Iran today.

Joe Lieberman: U.S. has no better ally than NCRI & MEK, the only opposition to Iran’s regime

The increasing courage and protests from the Iranian people give us hope that the day that we’re dreaming of is coming. There are still people who will say to you here in America, and they will be here until we defeat their arguments, “Okay, let’s go back to the table and negotiate with this regime in Tehran.” But they have not learned. We tried that and the regime in Iran still brutally suppresses the human rights of their people. The regime in Iran still steals the wealth of the Iranian people, still sponsors terrorism around the region and the world, still sponsors aggression throughout the region and the world, still builds nuclear missiles and the weapons that they want to put on them to attack their neighbors, Europe, and yes, the United States of America.

Let me say therefore that we have reached a point where we can conclude after all that has been tried with this criminal syndicate that is holding the people and history and culture of Iran hostage, that everything that has been tried has not worked. And since the regime in Tehran has proven itself that it will not change, we must together act to change the regime. It will come from the resistance fighters in Iran, so many of whom we have seen today. And when they do turn their resistance into rebellion, we, and the rest of the world, particularly in the United States, must stand with them and support them. I am convinced that is a day that is coming. And I am ready for that day.

Joe Lieberman:U.S. must stand with MEK Resistance Units in Iran-Negotiations with Tehran didn’t work
Previous article
NCRI Holds Three-Day Session on the Beginning of the 40th Anniversary of Its Founding
Next article
International Community Must End Iran Regime’s Impunity Over 1988 Massacre