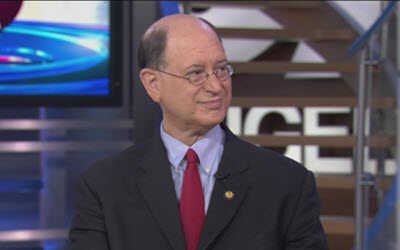 NCRI – United States Congressman Brad Sherman (D-CA) who serves in the Foreign Affairs Committee sent a message of solidarity to the Paris-held Iranian resistance rally, called “Free Iran”, scheduled for July 9. He commended Mrs. Maryam Rajavi, President-elect of the National Council of Resistance of Iran (NCRI) for her “advocacy of democracy, human and women’s rights in Iran.”

“Only when ballot box determines who holds power, when both women and men can speak freely and Parties can debate, will the Iranian people be able to govern the country for the benefit of all,” stated Sherman in his video message.

Congressman Sherman also emphasized in his message that the Iranian regime remains an existential threat to the US allies in the Middle East as well as peace in the world.  He expressed his concerns that the mullahs are defying proliferators of terrorism and extremism.

The following is the complete text of Congressman Brad Sherman’s message to the Iranian “Free Iran” rally in Paris.

Hello to my fellow parliamentarians, people of Paris and Madam Rajavi, I am United States Congressman Brad Sherman from California’s best named City Sherman Oaks, for 20 years I have served on the Foreign Affairs Committee of the House of Representatives, for the past 20 years I focused on preventing Iran from having a nuclear weapon and on implementing an American foreign policy that reflects our values and our dedication to Human Rights.

I want to commend the MEK for the critical role it played in exposing the Iranian regime’s nuclear weapons program. Following the attack on Camp Liberty last year, my colleagues on the House Foreign Affairs committee and I, passed a resolution about demanding the safety of the MEK residents of Camp Liberty, we did this to make it clear to the government of Iraq how serious this issue is and it’s need to fulfill its obligations under international law.

The current Iranian regime is not only an existential threat to the US allies in the Middle East and the Peace of the world, but is also a defiant proliferator of terrorism and extremism, I have introduced a bill in the United States Congress, the Iran Revolutionary Guard Corps Sanctions Act to require the U.S. President to block and prohibit all transactions in property and property interests of anyone who knowingly does business with the IRGC, the world must challenge the Iranian regime intensified support for terrorism across the Middle East including Syria, Yemen and Iraq.

I remain committed to ensuring that Iran does not get nuclear weapons that’s why I broke with my own political party and opposed the recent Iran nuclear deal, I am sure that the Iranian regime will cheat on that deal and we will then move forward with new sanctions which will force a new policy and hopefully a new regime in Tehran.

I also want to commend Madame Rajavi for her advocacy of democracy, human and women’s rights in Iran, only when The Ballot Box determines who holds power, when both women and men can speak freely and Parties can debate, will the Iranian people be able to govern the country for the benefit of all, that is why the commitment of the National Council of resistance of Iran to secular pluralist efforts that respect Liberties, that’s why it’s just so important, I hope you all enjoy this year’s convention. I wish I could be there with you in Paris, I am Congressman Brad Sherman.