Robert Torricelli: “Tomorrow is About Ending Regime in Iran” 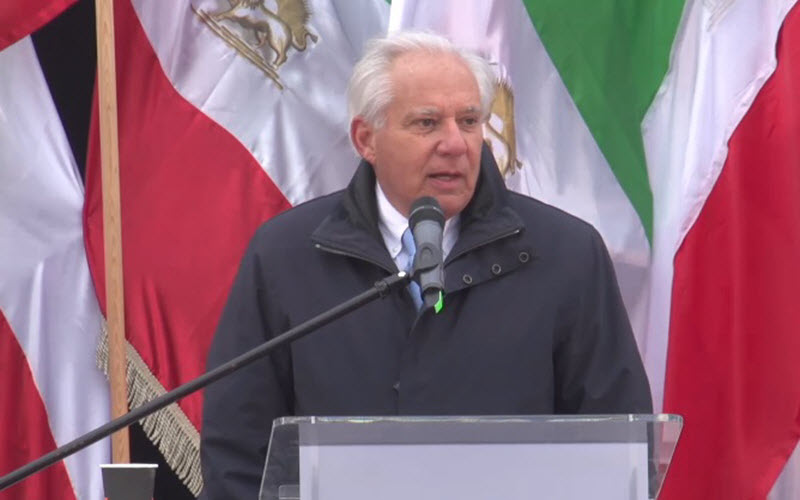 The rally by Iranians supporting the National Council of Resistance of Iran (NCRI) on Wednesday was held on the first day of the conference on Middle East in Warsaw Poland.

In all the world, there is no better place to meet to speak of freedom than in Warsaw, Poland,
For 70 years, the Polish people did not negotiate with their oppressors. They didn’t hope for change. They didn’t accommodate their loss of freedom. They never gave up the idea that Poland would be free. Today we come here to demand the same for the Iranian people.

Well, we congratulate those nations represented here today to discuss the future of the Middle East and Iran. We all speak to those nations that are not here. We understand your desire for accommodation and reconciliation, but there comes a time in life when reality must triumph over hope. We have tried to negotiate with Tehran. There have been negotiations with Tehran. We have hoped for for last 40 years and they have answered us with terrorism or oppression and death. The thousands of martyrs in Iran lying in their graves are a testament to the fact there is no negotiating with this regime. The regime must end now.

To those nations who believed that they must accommodate Tehran because there is no choice, we say to them, we are the choice, the people of Iran.

I understand those nations not gathered here today who seek accommodation with Iran because they’re concerned about nuclear weapons. I understand, but stopping the nuclear weapons in Iran won’t make the people who run anymore free. It won’t feed the hungry children in Tehran. It won’t end the oppression of basic rights. They won’t bring a free government. I say to those governments, not here wanting to uphold the nuclear accord there is more the Iranian people deserve than simply banning nuclear weapons and a government, which will kill thousands of its own people, send terrorists to France and Germany and Albania. A government that was imprisoning its own people, murderer its own opponents, cannot be trusted to keep its word on nuclear weapons or any other accord. A murderous regime is not a trusted regime.

My friends, they can call this conference anything they want, give it any name they want to give it. But here’s the truth: Yesterday was about negotiating with Tehran today and tomorrow is about ending the regime and bringing a free government to Tehran, welcome to the future.