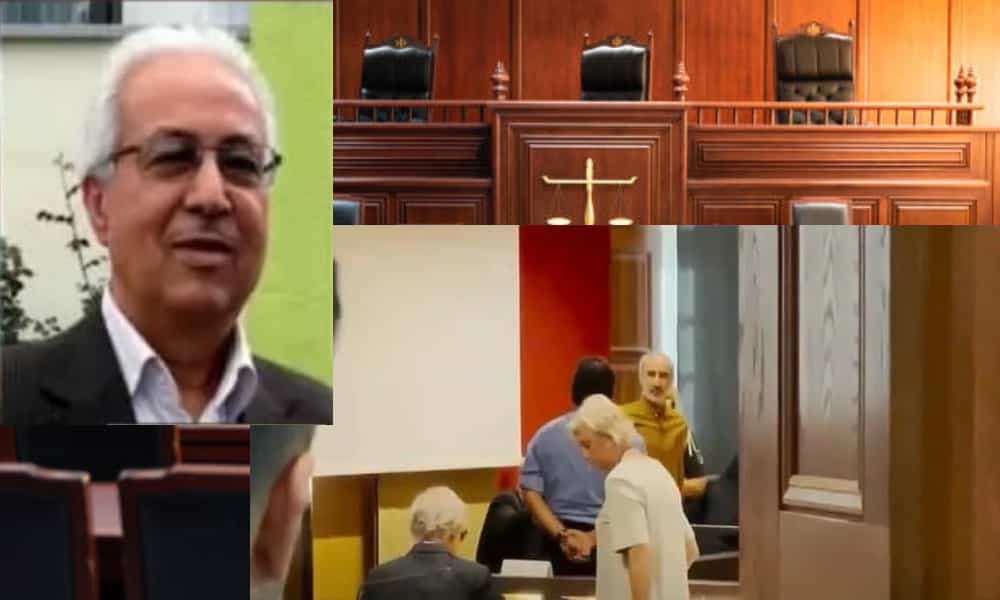 On March 22, the Swedish Judiciary held its seventy-sixth session of the court in Stockholm, Sweden that is prosecuting Hamid Noury a former prison deputy prosecutor accused of partaking in the executions of political prisoners in the summer of 1988 in Gohardasht Prison. The witness who testified on Tuesday was a  victim of the regime’s atrocities in the regime’s prisons during the 1980s, named Manouchehr Payvand.

Mr. Payvand was arrested in 1981 and sentenced to spend ten years behind bars in Evin Prison for supporting the People’s Fedayeen Guerrilla Organization and was later transferred to Ghezel Hesar Prison.

The verdict of the witness’ imprisonment sentence was presented as written evidence in court. This sentence was issued for “Manouchehr Babak”, an organizational pseudonym of the witness at that time of his activism. Since the beginning of the investigations, Mr. Payvand had objected to the quality of the translation of his interrogations with the Swedish police. The latter was also questioned by the defendant’s lawyers and thus the translations are undergoing revision now.

In court, Mr. Payvand testified that on July 28, 1988, the prison guards started to remove all TV sets. Broadcasting radio programs stopped, prisoner’s rounds were forbidden, and meetings with family members were halted. Prison officials even refused to take ill prisoners to medical facilities. The witness said to have heard from prisoners who were affiliated with the Mojahedin-e Khalq Organization (MEK/PMOI) that 200 of their fellow MEK members or supporters had been executed. He said it initially was hard to believe this account because these people had all been sentenced to imprisonment and were spending their time in prison for many years.

Mr. Payvand said that “seeing a mountain in slippers” in the yard of Gohardasht prison was the first shock to him and his cellmates. The witness said he saw a fully-loaded truck carrying the bodies of the “massacred” political prisoners as he later found out.

Answering questions from the judge, Mr. Payvand said that in early August, on the third floor of Ward 7, he saw bodies lying on the ground in the prison yard for two days and he saw prison guards spraying the corpses with disinfectants. He also saw the spraying of the prison yard after the bodies were taken away.

Referring to the defendant Hamid Noury, the witness said to have met “Brother Abbasi” in Ward 7 of Gohardasht prison for the first time without a blindfold, on 27 or 28 August 1988 as he remembered.

“Brother Abbasi along with several other guards, read the names of 20 people,” Mr. Payvand said. “People like Reza Zhirkzadeh, Bijan Bazargan, Majid Vali, Amir Hoshang Safaeian, Mahmoud Ghazi, Javad Najafi, Bahman Ronaghi and Nakhoda Hakimi. Noury asked me whether I prayed or not. My response was negative and then Noury said that we will find out whether you are praying or not.”

According to Mr. Payvand, he was taken to death row by Naserian (Mohammad Moghiseh) and was blindfolded to stand in front of 15-16 people, including the religious judge Hossein Ali Nayyeri and the prosecutor Morteza Eshraqi. He also described a person named “Zamanian” who was probably the representative of the Ministry of Intelligence at the prosecutor’s office. Zamanian came into the wards and vowed that he, the witness, would not be released and was going to be killed.

Mr. Peyvandi also testified that in the “death corridor”, he heard the voice of a prison guard shouting, “What kind of a mess is this! You have executed innocent people!”

The witness said that based on his recollection the voice belonged to the prison guard called “Brother Abbasi,” i.e. Hamid Noury.

Fifteen days after escaping execution, Manouchehr Payvand was flogged with a group of prisoners who had shared a similar fate. After accepting to pray and being interviewed by Hamid Noury and several others, the whipping was carried out. He testified that one of the prisoners, Jalil Shahbazi, was flogged so badly that he tore his abdomen with a piece of glass in the toilet and committed suicide. Prison officials refused to send Shahbazi to a health center or hospital, which resulted in Shahbazi’s death.

According to Mr. Payvand, about 200 people had survived the massacre. He recalled that Naserian specifically said that all other political prisoners had been executed.