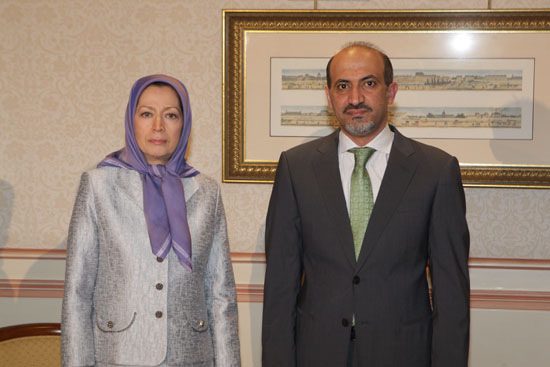 NCRI – Speaking in support of the recent meeting Mrs. Maryam Rajavi, the President-elect of Iranian Resistance met Mr. Ahmad Jarba, the President of National Coalition for Syrian Revolutionary and Opposition Forces, to forge closer ties between the two opposition movements, Mr Ziyad Hassan, member of Syrian National Council’s Political Delegation said the movements seek freedom and dignity their nations and the two should have sat behind the negotiating table long ago.

The meeting between Iranian Resistance leader Maryam Rajavi and Mr Ahmad al-Jarba on May 23 which widely has been welcomed in the region has sparked anger by the Iranian regime.

Mr Hassan told al-Jazeera on May 25 that it was the second such meeting between the SNC and the People’s Mojahedin Organization of Iran (PMOI/MEK), and designed to combat the Iranian regime’s ‘intimidation and insurgency’ which had spread beyond the country’s border and made Iran the ‘epicenter of troubles in the entire region’.

He told al-Jazeera: “We want to establish new relations with the PMOI (MEK) to see how they can support the Syrian revolution and opposition in its struggle against Iran and its practical wing in Syria, portrayed in Bashar Assad and his ruling faction.

“The SNC and PMOI (MEK) should have sat behind the negotiating table long ago because we stand for the same values.

“Iran is spending billions to spread terrorism and corruption in Syria and to support the criminal regime in Syria, while the Iranian people are suffering from hunger.

“We are seeking solutions on how to cooperate and coordinate our joint efforts. We don’t need any troops or forces from outside of Syria. The Syrian men and fighterscan defend Syria and the Free Syrian Army is committed to defending Syria.”

He said allegations from Tehran that the bodies of PMOI (MEK) members were found in the Syrian city of Idlib were a lie, and they were in fact those of Lebanese Hezbollah militants and Abolfazl Abbas militants sent by Iran to ‘kill the Syrian people and spread terrorism in our country’.

He said the PMOI (MEK) had great influence among the Iranian people, while their leaders were spending billions of dollars during a dire economic crisis.

“This will not happen in favor of Iran and in my view the Syrian people’s revolution will overcome them, despite all of Iran’s support for this criminal regime in Syria.”