NCRI – Anglo-Iranians are campaigning in London to draw attention to the 1988 massacre of 30,000 political prisoners in Iran, Britain’s Independent reports.

The following is the text of a report published by The Independent on Monday: 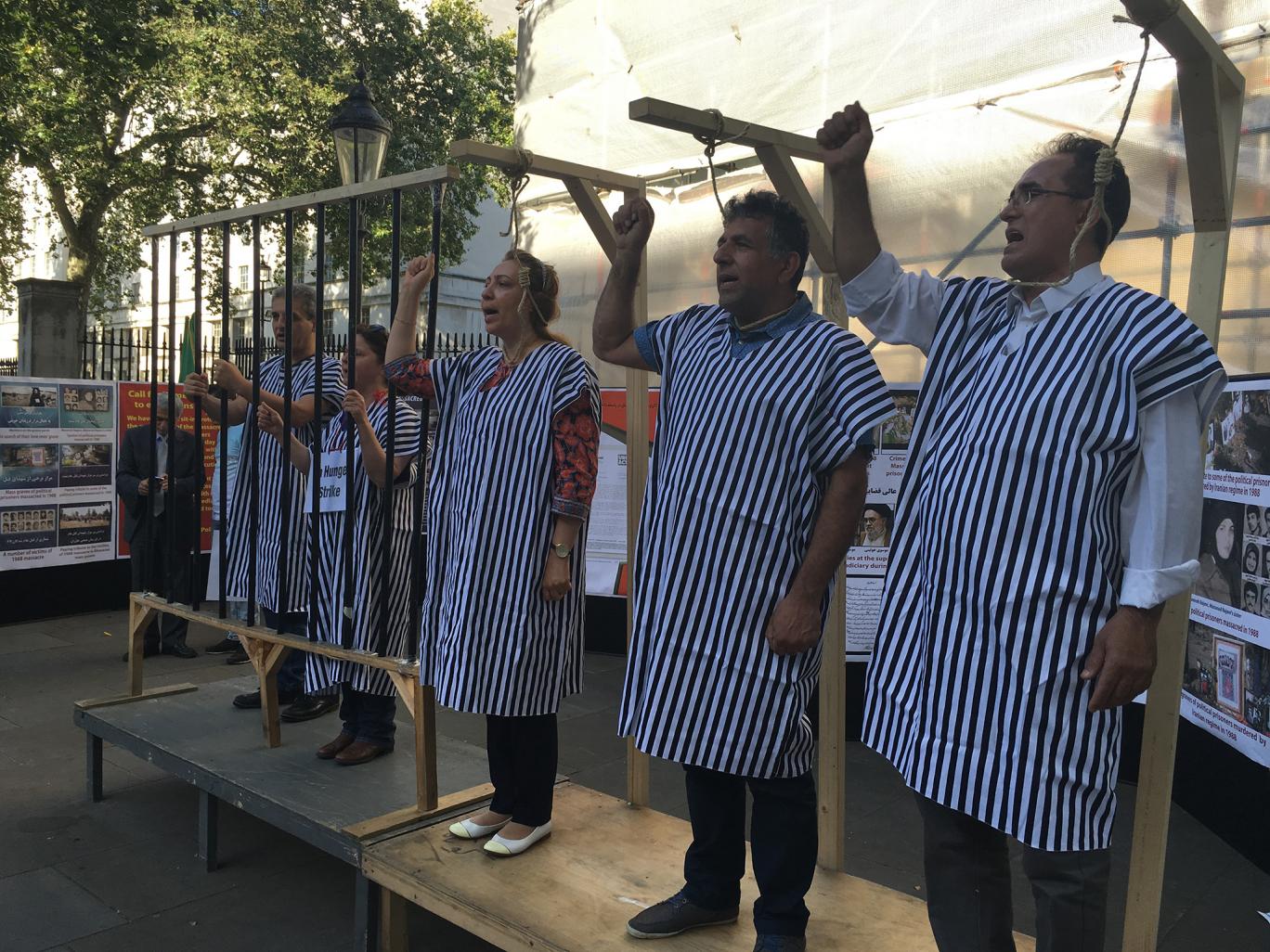 Protesters have staged a mock execution as they entered the final day of their hunger strike outside Downing Street in a bid to pressure the UK government into condemning the “horrific” executions being carried out in Iran.

The three-day demonstration began on Saturday to coincide with the anniversary of the massacre of around 30,000 political prisoners across the country in 1988.

Iran’s supreme leader at the time, Ayatollah Ruhollah Khomeini, issued a secret fatwa against people deemed to be “at war with Allah”.

During the five-month purge the majority of people executed came from the main political opposition party, the People’s Mujahedin of Iran, and other smaller left-wing groups such as the Iranian Communist party.

Many were members of the minority Sunni Islamic community.

Over the weekend groups of Anglo-Iranians and British supporters marked the anniversary in protest over the more than 2,500 people they say have been hanged in the country since the start of Hassan Rouhani’s presidency in 2013.

The National Council of the Resistance of Iran, which organised the protest, said: “The hunger strikers and protesters are urging the UK government to categorically condemn the incessant cruel hangings that are taking place unabatedly in Iran and act with its Western allies to press for an immediate halt to the executions and torture in Iran.

“They also called on the UN Human Rights Council and the UN Security Council to refer the human rights dossier of the mullahs’ regime to the International Criminal Court for the prosecution of its leaders including the Supreme Leader Ali Khamenei and President Hassan Rouhani.”

The Paris-based group’s president-elect Maryam Rajavi described the 1988 massacre as an “appalling crime against humanity” and said it was time for the UN “to end their silence and bring the record of the Iranian regime’s crimes before the International Criminal Court.”

Conservative MP Matthew Offord offered his support to the protesters saying: “I would like to send my best wishes to all of you who are protesting against the horrific events we have seen happening in Iran over this past few weeks.

“The mass execution of Sunni political prisoners is deeply disturbing and has rightly been condemned.

“A few weeks ago, I spoke to over 100,000 people who attended the annual National Council for Resistance in Iran conference in Paris.

“It was a great opportunity for myself and fellow parliamentarians to express our concerns over these events and we will continue to stand with you all and highlight your concerns in Parliament.”