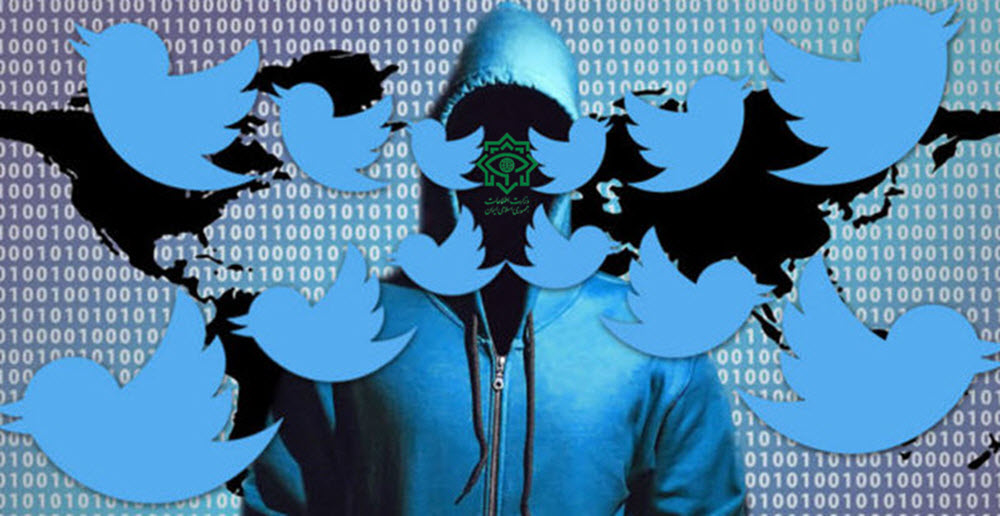 Twitter’s release of a portion of tweets by the clerical regime’s cyber machine reaffirmed the Iranian Resistance’s long held position that Iran’s religious fascism is the primary source of hostility and vilification vis-a-vis the National Council of Resistance of Iran (NCRI) and the People’s Mojahedin Organization of Iran (PMOI/MEK). The regime views the destruction of the Iranian Resistance as the only way to save itself from the prospect of inevitable overthrow.

Tehran’s twitter campaign that took unprecedented proportions in early 2018, immediately after the start of the nationwide uprising, reveals that simultaneous with increased repression inside Iran, the clerical regime is laying the groundwork for acts of terrorism against the Iranian Resistance abroad by dramatically stepping up its campaign of lies and demonization.

1. In September, Twitter closed 770 accounts of the Iranian regime, declaring them false accounts for government propaganda and disseminating fake news and lies. At the same time, Facebook, Instagram and Google also closed similar accounts related to the Iranian regime. On October 17, Twitter published content associated with these 770 accounts, amounting to 1,122,936 tweets, along with embedded photos and videos.

2. Although the accounts closed by Twitter were primarily seeking to influence and interfere in US elections, a significant number of tweets are devoted to spreading false information and demonization of the PMOI and the Iranian Resistance. The accounts that were shut down obviously reveal only a small fraction of the regime’s disinformation machine, and the tweets that were exposed continue to exist in many of the clerical regime’s other, still active, Twitter accounts, most of which insist on having no ties to the Tehran regime.

3. Most of the tweets related to the PMOI are in Persian, followed by English, Arabic, Spanish, French, Albanian, and Pashto. They began in 2012, and grew in scale in 2017 and 2018, in such a way that the number of tweets in 2018 is more than the total number of tweets published over the previous six years.

Prior to this, in letters dated August 10 and August 13 to Channel 4 and in a letter dated August 22, 2018 to Al-Jazeera English, as well as in a statement by the NCRI’s Security and Anti-terrorism Committee on September 19, the PMOI had exposed the dirty scenarios dictated by the Intelligence Ministry to a network of “mullah-friendly reporters,” providing details, documents and the names of the agents used in these programs.

5. One of the published tweets reads: “NBC On Assignment with #RichardEngel commissioned these exclusive drone shots of the #MKO’s secret new base near Tirana in Albania. The #MEK are a shadowy group with a terrorist past they killed Americans in Iran in the 1970s and then fought alongside Saddam Hussein. Widely hated.” https://t.co/F019t3iuvh

6. The disclosed tweets reveal that the regime has set up various accounts and at least 70 hashtags, tailored to its needs and the Resistance’s activities at various times. For example, Tehran’s cyber machine produced the hashtags #BanTerrorOrg, #BanMEK, #IranHatesMEK, and #No2MEK before the annual gathering of the Resistance in Paris in June. In many cases, the regime tried to pretend that these hashtags were produced by users who were opposed to both the regime and the Iranian Resistance in Paris in June. This ploy is commonly used by the mullahs’ intelligence apparatus and cyber army, and by its mercenaries and sleeper cells, to confuse and to muddy the waters. At the same time, they claim that the PMOI labels anyone who opposes them an intelligence agent without provision of any proof.

7. #IranHatesMEK was activated on July 1, 2017, the day the Resistance held its annual gathering that year.

8. #BanTerrorOrg, #BanMEK and #هزارجلاد هزاراشرف (Farsi) were introduced in the days prior to the June 30, 2018 gathering, and widely used by the regime’s fake accounts in a bid to overshadow the gathering.

9. #BanTerrorOrg announced a Twitter Storm against the PMOI scheduled for 8PM on June 29, 2018, the day before the gathering.

10. The clerical regime has unleashed a full-force cyber attack against the PMOI and Camp Ashraf 3 in Albania, in addition to its network of “mullah-friendly reporters” and notorious mercenaries. Some examples of these tweets are:

– RT @noiranwarorg: An Eye-opener: Camp Afshraf three, relocated from Iraq to Albania: “Trump, along with Israel, has a clear plan and this i…

– A speech last week by Trump’s legal advisor Rudy Giuliani in #Washington demonstrates fully that he, John Bolton, John McCain and the Trump administration hawks are able, without reservation, to exploit #Albania as a failed nation state. https://t.co/5YKNBkCnIu

– The #MEK is a terrorist group. #Albania cannot host a terrorist group without consequences. This is not #Afghanistan or #Iraq or #Syria in which groups hide in the chaos and violence. This is a peaceful, democratic country which wishes to join the #EU. https://t.co/5YKNBkCnIu

11. A number of IRGC and Intelligence Ministry tweets are linked to a site affiliated with the Intelligence Ministry and known as Iran-Interlink, or include quotes from an intelligence agent named Massoud Khodabandeh or his wife Anne Singleton. As part of the campaign to mislead public opinion, these troll accounts also made use of the common ploy of re-tweeting and amplifying such tweets. Iranian Intelligence has instructed these agents to shift their previous focus from Ashraf and Liberty in Iraq, to the presence of the PMOI in Albania:

– RT @IranInterlink: Massoud Khodabndeh: The mysterious disappearance of a member of the Mojahedin Khalq (MEK) terrorist group in Albania has…

12. Other tweets disclosed by Twitter target the presence of the PMOI and Iranian Resistance in France, and in particular the Resistance’s annual gathering:

– Mr president @EmmanuelMacron the so called #MEK group whch has carried out numerous #terrorist activities in Iran,which has acted as mercenaries of Saddam Hussein and killed thousands of Iraqi Shiites and Iraqi Kurd is living freely in your countryexpel them please #BanTerrorOrg https://t.co/PTcGpQXAwk

– Just imagine what would happen if Iran hosted an #ISIS gathering (the murderer of more than 700 French citizens from 2015)? Now #France is hosting a gathering of #MEK terrorist organization (responsible for the murder of 15,000 Iranians) in Paris! #BanTerrorOrg https://t.co/mi2PfOa5W9

– Paris is hosting a gathering of #MEK terrorist organization (responsible for the murder of 15,000 People) This is like how France supported #ISIS in Syria. https://t.co/AE04kFO7oK

– Why are France, US, and some other countries like Saudi Arabia are supporting MEK terror group? Do you know MEK? “Since 1981 the [MEK] have claimed responsibility for murdering thousands of Iranians,” the report said. Among victims, there are many kids and women #TuesdayThoughts https://t.co/WyYGEdIxZW

– France’s safety is the main victim of MKO’s traffic https://t.co/P9dAPc2bCJ

13. When the regime failed to stop the PMOI gathering in Paris, and when according to one of the regime’s parliamentarians, Tehran’s foreign minister Javad Zarif, who had gone to France in a bid to cancel the PMOI gathering but came back empty handed, the regime subsequently fabricated a phony statement by the PMOI and tweeted:

14. Other tweets lay bare the regime’s rage and loathing of the support proclaimed by certain American personalities for the Iranian Resistance:

– RT @tparsi (Trita Parsi): With Bolton in the White House, the MEK terrorists are one step closer in doing to Iran what Bolton did to Iraq. Make no mista…

– @N0_H8_EVER You’re right! Maryam Rajavi is their leader. They are officially from the MEK. These guys were officially trained by USA gov…They have blood of thousands of Iranians on their hands.They’re an old Marxist cult,renounced Marxism only recently to receive USA aid a few yrs ago.

15. The regime’s idiotic enmity and blind hostility against the NCRI’s President-elect, Mrs. Maryam Rajavi, and the Resistance’s Leader, Massoud Rajavi, color most of these tweets and retweets, and are not worth repeating. In addition to being false, they often include extremely malicious and vulgar phrases, amplified by dozens of other regime accounts. Other tweets include:

– Why did the Saudis promote #IStandwithMaryamRajavi? They gave her money. They don’t want their investment to fail.

– The #MEK is NOT a simple opposition group. It’s a terror organization. More than 16,000 Iranians have been killed by the People’s Mujahedin of Iran since 1979! Read again: 16,000 people!including 1 President&amp;1 Prime Minister #BanTerrorOrg #FreeIran2018 #IStandWithMaryamRajavi https://t.co/uPkftShOxw

As the officials of Twitter stated on October 17, 2018, “It is clear that information operations and coordinated inauthentic behavior will not cease.”

To prolong its shameful rule and to prepare the grounds for terrorism, the clerical regime will not abandon deception and deceit, and it will not hesitate to exploit social networks and other Internet services. Most of the accounts, pages and websites of the regime, or its IRGC guards and torturers posing as ordinary users or opponents of the regime, are still active.

After Facebook and Twitter shut down the clerical regime’s accounts, Tehran’s foreign minister Zarif foolishly called for the closure of accounts of supporters of the Resistance. He tried blackmail and deceit in his haste to use “mullah-friendly reporters” and agents of the Ministry of Intelligence.

The bloodied and hideous hands of religious fascism must be removed from Facebook, Twitter, Instagram, Google and Wikipedia. Accounts produced by the mullahs’ regime under whatever name or title should be exposed and closed.

The clerical regime should not be allowed to use the Internet to lay the groundwork for its terrorism and inhumane objectives.

Previous article
Iran: Regime Collapse Will Lead the Way to Freedom for the People
Next article
An Unprecedented Rise in the Number of Child Labour in Iran