Washington Times: Largest ever “Free Iran” rally to be held on Saturday 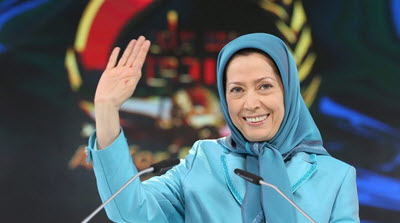 NCRI – In the biggest gathering of its kind, thousands of Iranian dissidents — and no shortage of former high-level American officials from both sides of the aisle — will converge in Paris on Saturday for a giant rally calling for the downfall of Iran’s theocratic government, The Washington Times reported on Friday.

The Washington Times interviewed Maryam Rajavi, President-elect of the National Council of Resistance of Iran (NCRI).

This year’s rally participants “represent the voice of millions of Iranians who are being oppressed in their country and who seek regime change and the establishment of a democratic, pluralist and non-nuclear government based on the separation of religion and state,” Mrs. Rajavi said in an email interview with The Washington Times this week.

“Their expectation of the next U.S. president, as with other Western leaders, is to abandon the policy of appeasement, which emboldens the Tehran regime to intensify the suppression of the Iranian people while continuing the policy of exporting terrorism to the region,” she said.

Mrs. Rajavi has explicitly called for “regime change” in Tehran, and this year she’ll do it to cheers from thousands of NCRI members and supporters. Last June, hundreds of buses ferried in activists from across France and beyond to fill a fairground and convention center in the town of Villepinte, just north of Paris.

Mrs. Rajavi insisted the broad “resistance” movement was growing inside Iran in recent years even as the government has cracked down on the group.

“Despite the intensification of the suppression over the past couple of years, we have witnessed a growing interest among the Iranian people, especially women and youth, towards the Iranian Resistance,” she said. “The opposition to the regime is expanding.”

The NCRI leader slammed last year’s nuclear deal with Iran, arguing that the state political freedom and human rights have only worsened since the inking of the deal last July.

“The pace of executions has intensified. Arrests have multiplied,” Mrs. Rajavi said, arguing that “economic stagnation has [also] worsened” in the nation, as has Iran’s relationship with its neighbors.