Iran Regime's FM Javad Zarif Should Be Banned from Europe 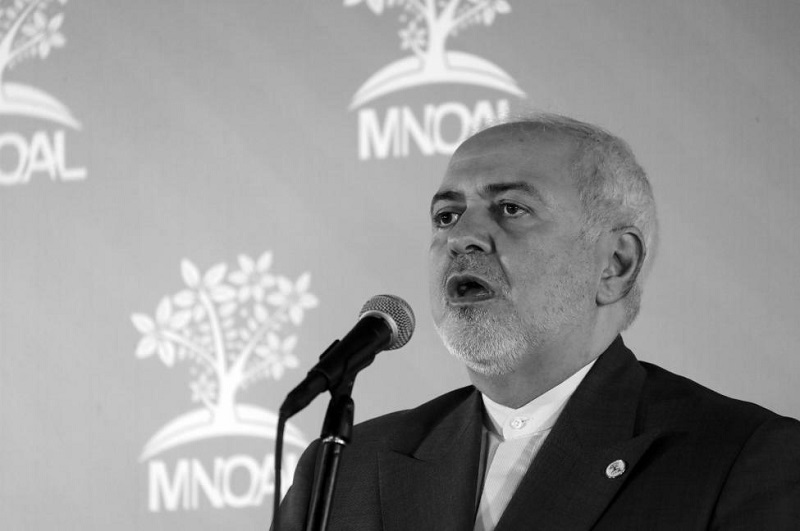 Written by Mansoureh Galestan on 27 August 2019.

The Iranian regime's Foreign Minister Mohammad Javad Zarif should be banned from Europe due to his role in the regime's terrorist activities, former European lawmaker Struan Stevenson argues.

In a column for the United Press International on Monday, August 26, 2019, Mr. Stevenson pointed out: "As foreign minister, Zarif is in charge of Iran's army of ambassadors and diplomatic staff. In June 2018, he was therefore responsible for the orders given to Assadollah Assadi, a diplomat from the Iranian Embassy in Vienna. Assadi was instructed to hand over 500 gm of high explosives and a detonator to an Iranian couple from Antwerp, Belgium. He ordered them to drive to Paris and detonate the bomb at a major rally organized by the National Council of Resistance of Iran attended by over 100,000 people. A combined operation by the German, French and Belgian intelligence services led to the arrest of Assadi and the other conspirators, all of whom are now in prison in Belgium, awaiting trial on charges of terrorism."

It was well known that Rudy Giuliani and other high-ranking international political leaders would be attending and speaking at this rally, so Zarif must clearly have planned the terrorist attack with Mahmoud Alavi, Iran's minister of intelligence, and Reza Amiri Moghaddam, head of the Ministry of Intelligence & Security's Foreign Intelligence and Movements Organization, Mr. Stevenson wrote.

"Such a high-level atrocity could only have been validated by Hassan Rouhani, the so-called 'moderate' president of Iran and the country's supreme leader, the deeply psychotic Ali Khamenei. Zarif had even arranged to fly to Vienna, the day following the proposed bombing outrage, presumably to congratulate Assadi personally and to spread the usual lies and propaganda, no doubt blaming the Mojahedin e-Khalq/People's Mojahedin of Iran (MEK/PMOI), the main opposition to the mullahs, for planning the attack on their own supporters so that they could point the finger of blame at the Iranian regime."

"But Zarif's plan backfired horribly, leaving him lamely trying to claim that the arrest of his diplomat and other trained Iranian agents was a 'false flag operation' designed to deceive, by enemies of Iran. It will be interesting to see what the Belgian courts make of this ludicrous claim."

"Ironically, the senior diplomat whom Assadi had replaced in the Vienna Embassy was Mostafa Roodaki, another trained MOIS agent. He had previously been the head of the Iranian regime's intelligence station in Austria and had been coordinating activities against the MEK across the whole of Europe. Roodaki had been redeployed to Albania by Zarif, with the rank of first secretary in the Iranian Embassy in Tirana. He was joined there by a new ambassador appointed by Zarif, Gholam Hossein Mohammadnia, a former high-ranking Iranian intelligence official who had also been a member of the Iranian nuclear negotiating team."

"Zarif had clearly instructed his new team of 'diplomats' in Albania that their main mandate was to track down and eliminate the MEK, which had created a new compound in the country housing over 2,500 of their members."

But once again Zarif's plans were thwarted, Mr. Stevenson pointed out.

"Albanian intelligence officers uncovered a plot to detonate a bomb at a Nowruz (Iranian New Year) gathering of MEK members in Tirana. Two MOIS agents, together with Mohammadnia and his Roodaki, were expelled from the country by Albanian Prime Minister Edi Rama. And these were not the only terror plots that bear the fingerprints of Zarif. In October 2018, the Iranian regime sent another senior MOIS agent -- Mohammad Davoudzadeh Lului -- with close ties to the Iranian Embassy and its ambassador in Norway to assassinate an opposition figure in Denmark. He too now awaits trial on terrorism charges. Also, in 2018 two Iranian diplomats were expelled from the Netherlands for acts of terror."

"Yet the West continues to believe that his mastery of English and his benign smile mean that he must be a trustworthy moderate with whom we can negotiate. It may be worth remembering that Adolf Hitler's foreign minister, Joachim Von Ribbentrop, was also a fluent English speaker and could also smile benignly for the cameras. He was executed as a war criminal on Oct. 16, 1946."

Struan Stevenson is coordinator of the Campaign for Iran Change. He was a member of the European Parliament representing Scotland (1999-2014), president of the Parliament's Delegation for Relations with Iraq (2009-14) and chairman of Friends of a Free Iran Intergroup (2004-14). He is an international lecturer on the Middle East and is also president of the European Iraqi Freedom Association.