Fear of the Iranian regime enforcing a further round of protests

MEK sources reported that on Monday afternoon, February 17, 2020, the Iranian regime stationed a group of anti-riot units in front of  the Sharif University in Tehran. The Iranian regime is afraid of the forming of another round of protest gathering by the students. 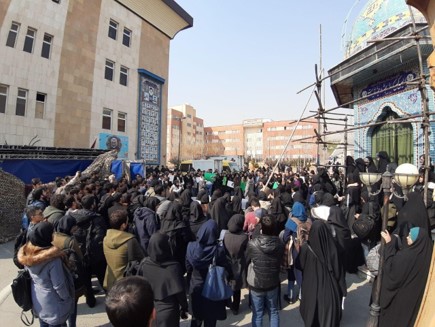 It’s worth mentioning that yesterday students of Amirkabir, Allameh, Science & Technology, and Tehran universities held protest gatherings in the memory of the victims of the last November and January uprisings and also the demise of the Ukrainian airliner.

Students chanted: “Justice and freedom are the nation’s cry”, “political prisoners must be freed” “you are both fraudulent and cruel, Shame on this despotism” 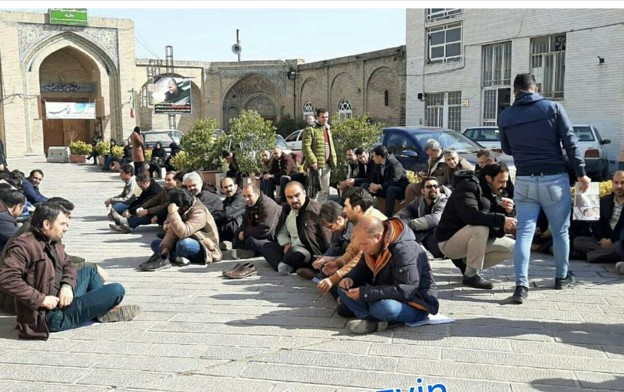 Protest gathering by the workers

The MEK network reported that on Tuesday, February 18, 2020, a group of Qazvin Counter Manufacturing Co’s workers held a sit in and protest gathering before Sheikholeslam mosque in the western province of Qazvin. These workers have not been paid for two and half months.

Regarding the workers’ sit in and gathering, the Qazvin Governor, Jamalipour, brazenly stated that he wouldn’t show up to the gathering to answer the workers’ grievances.

Villagers forced out the MP

Yesterday, social media reported that the inhabitants of Sheik Hassan Village in the southern city of Shoush, forced the regime’s MP, Nouri, out of the village’s mosques. After a conflict between the villagers and the MP’s bodyguards, Nouri had to leave the village.

Students are being summoned to the university’s disciplinary unit

Recently, the officials of Shiraz university have summoned some of the students who have been participating in a gathering in the memory of the Ukrainian airliner’s victims. The ceremony was held on February 12th.

Political Prisoners Call For The Boycott of the Sham Parliamentary Election

In a statement issued by 12 Political Prisoners in Evin Prison, some who are well renowned political prisoners stated that anyone who goes to the polls, it will be like putting their fingers on the trigger of a gun and pointing it towards rebellious youth. This is the confirmation of the status of the ruling system and its crimes.

#Iran #Humanrights News: Maryam Akbari Monfared, #politicalprisoner in #EvinPrison has been denied family visitations. She has been in prison for #10years without even a day of prison furlough. https://t.co/IvEQ5YsX8N#FreeIran from repressive mullahs!

The people of Iran have cast their real and irrevocable votes during the November 2019 and January 2020 bloody uprisings and by sacrificing their lives and taking to the streets.

This system (regime) and its election rests solely on the blood of millions of innocent youths who were slain during March 1979, summer of 1980, June 1981, and the massacres of the 1980s, especially the massacre in the summer of 1988, the chain murders in the 90s, the bloodshed in Khatun Abad and in Islamshahr and the killing of protesters in 2009; the Kahrizak catastrophes and the mass execution of our Kurdish compatriots in Iranian prisons under the pretext of fighting terrorism; the killing of protesters during the December 2017-January 2018 uprisings and finally the brutal killing of people in November 2019, etc.

“Reformists at a DeadEnd”

Abdullah Ramazan-Zadeh the former spokesman for the Iranian dictatorship during Mohammad Khatami’s presidency acknowledged that the Iranian people hate all factions of the mullah’s regime.

Ramezan-Zadeh who is known as one of the so called “reformists” wrote in the state daily, Etemad: “What was the outcome of this November’s events (Iran Protests in more than 191 cities)? The path of reform within the framework of participation in legal institutions has come to a dead end…”

With less than a week to go before Iran’s parliamentary elections, Hassan Rouhani, the regime’s president, held a press briefing on Sunday in which he discussed different critical issues.#Iran#BoycottIranShamElectionshttps://t.co/V3FA2ixCse

During the November Iran Protests, the Iranian people took to the streets of Iran chanting, “Reformists, Hardliner, the game is over”. The Iranian regime brutally suppressed the protests, killing over 1500 protesters, injuring over 4000, and arresting another 12,000 who  are still in prisons being tortured and suffering inhumane treatment. The “reformists” and “hardliners” backed the repressive measures of the regime at the time.

Ramanzan-Zadeh expressing his fear of the Iranian people’s determination for regime change in the face of brutal repression admitted that there are no other means left for the Iranian people to obtain their rights within the legal frame of this regime. He reminded the late Bazargan, the 1st Prime Minister of Iran after the 1979 revolution, who once during his court hearing at the time of Shah’s dictatorship had told the judge that when you repress us like this, we will be the last group of people that will speak with you in a peaceful manner.

Wednesday, February 19, 2020, marks the 97th day since the beginning of the nationwide Iran protests.