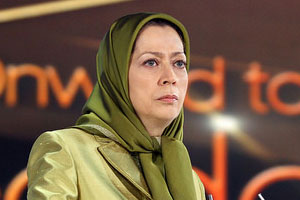 Failure of the year-long negotiations, a seven-months extension of endless negotiations and ignoring Security Council resolutions, leave the way open for the mullahs to acquire nuclear bomb, entailing a serious threat to world peace and security

NCRI – Mrs Maryam Rajavi, President-elect of the Iranian Resistance, called the negotiations between the United States and the five powers and the religious fascists ruling Iran, a failure, due to unjustified concessions made to the regime.

She said: “Ignoring Security Council resolutions and extending endless negotiations with the Iranian regime leaves the way open for them to acquire a nuclear bomb, which is considered by the mullahs as a ‘guarantee for survival’ of the regime.”

“Continuing with negotiations which have been going on for 12 years, instead of decisiveness and intensifying sanctions, amounts to taking a path which will inevitably lead to the acquisition of a nuclear bomb. This is the repeat of the same policies and mistakes which have brought the mullahs so close to obtaining a nuclear bomb.”

Mrs Rajavi added that the mullahs’ medieval regime, which is engulfed in internal crises and is in fear of the consequences of relinquishing its nuclear bomb program, in accordance with a red line set out by Ali Khamenei, will refrain from signing a comprehensive accord which would prevent it from obtaining a nuclear bomb.

Possessing a nuclear bomb and the domination of Iraq are vital for the Godfather of ISIS and the international banker of terrorism.  Giving seven more months to the regime will only provide further opportunity to the regime to obtain a bomb.

Mrs Rajavi stressed that last year the clerical regime, under pressure of international sanctions, internal isolation and the revelation of its nuclear weapons program by the Resistance, was forced to retreat a step and signed the Geneva accord.  Numerous unjustified concessions by Western governments have emboldened the regime. This is the result of the shameful silence regarding the gross violation of human rights in Iran, including among others throwing acid on women and daily executions across Iran and also regarding the export of terrorism and occupation in Iraq, Syria, Lebanon and Yemen.

Mrs Rajavi recalled that after the Geneva accord, she had declared that: “The extent of the regime’s retreat and abandoning nuclear weapons as well as its compliance with international obligations depend precisely on the degree of decisiveness and firmness of the world community vis-à-vis the regime’s evil intentions and its intrinsic deceptiveness? Any leniency, hesitancy and concessions by the international community will prompt Khamenei to once again move towards manufacturing nuclear weapons through deception and cheating.”

Mrs Rajavi reiterated that the full implementation of Security Council resolutions, in particular a complete halt of enrichment activities, acceptance and ratification of the additional protocol, and free access to suspicious sites and installations of the regime by inspectors are crucial to ensure the regime would abandon its efforts to acquire a nuclear bomb.  Experience shows that such a result can only be achieved by decisiveness and comprehensive political, oil and arms sanctions, as well as evicting Iran from Iraq, Syria, Yemen and Lebanon.

A report by the International Committee in Search of Justice published last week clearly indicated that the Iranian regime’s nuclear program was from the outset, with military intentions and all its apparent civilian activities, were at the service of building a nuclear bomb.  The regime never reported these activities voluntarily to the International Atomic Energy Agency under the Non-Proliferation Treaty, and it was the Iranian Resistance that revealed the regime’s program for the first time.

Secretariat of the National Council of Resistance of Iran
November 24, 2014

Previous articleIran nuclear talks extended for lack of a deal
Next articleSenator Rubio: Extending talks will not achieve a nuclear-weapon-free Iran