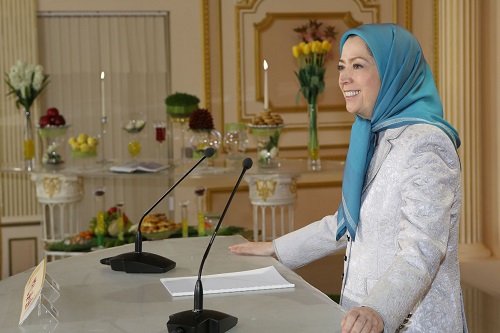 Maryam Rajavi: Nowruz strengthens solidarity among people, by overcoming differences and improving friendship, therefore the mullahs are strongly against it

Auvers-sur-Oise, April 3, 2016 – The Persian New Year was celebrated with a number of residents of Val d’Oise and French supporters of the Iranian Resistance at the headquarters of the National Council of Resistance of Iran (NCRI).

Maryam Rajavi welcomed the Auvers-sur-Oise neighbors and supporters from nearby towns.

She elaborated on the philosophy of Nowruz as well as the situation in Iran today and pointed out: The philosophy of these feasts is to strengthen solidarity among people, by overcoming differences and improving friendship.

No wonder that the mullahs are so strongly against Nowruz. They made tremendous effort during their rule to ban Nowruz celebrations, to no avail. Under the mullahs, the Iranian people have celebrated Nowruz more enthusiastically than ever before to show that their culture is greater than what the mullahs advocate. They have thus expressed their hope for change of the mullahs’ regime.

In her appraisal of the events of the past Iranian year, the Iranian Resistance’s President-elect noted: Our compatriots staged over 6500 large and small demonstrations and protests. Teachers called off school and staged demonstrations in cities all across the country. Workers held numerous demonstrations.

With nearly 1,000 executions over the past year, the total number of executions under Rouhani amounts to 2300, despite his claims to moderation.

The international sanctions were lifted but the economic situation further aggravated. Unemployment and poverty have become rampant. Today, one out of every two persons in Iran is unemployed because the mullahs spend the country’s revenues on the war in Syria to keep Bashar Assad in power.

A few days ago, the mullahs’ supreme leader Ali Khamenei admitted that 60 percent of all Iranian factories were closed down, although workers in the active factories do not receive their wages, either.

The mullahs tried to cover up their oppressive image by holding a sham election.

However, it was not a genuine election, but a competition between two groups of officials in charge of torture and executions. The greater majority of the nation did not participate in the voting. Indeed, if the mullahs accept a free election, and freedom of speech and gatherings, their power will rapidly diminish.

You might be aware that last year, the Iranian regime had a major plot to annihilate the Iranian Resistance. On October 29, 2015, they launched an unprecedented rocket attack on Camp Liberty. Twenty-four of the residents were killed and dozens more were wounded. The mullahs were intent to kill most members of the PMOI (People’s Mojahedin Organization of Iran – MEK) in that attack, a plan that fortunately was not successful.

Maryam Rajavi stressed on the need for greater solidarity to counter the threats of the religious dictatorship ruling Iran. She emphasized: By supporting Assad’s dictatorship and backing terrorist groups in Lebanon, Yemen, Iraq and other places, the mullahs have created a desirable atmosphere for the expansion of terrorism.

To counter the regime, we need even greater solidarity among you and us, and among the peoples of Europe and the Middle East all of whom are suffering from terrorism. We need solidarity to prevent governments from appeasing the religious dictatorship in Iran.

Previous articleAir France crew refuse to wear headscarves in Iran
Next articleIRAN: Mullahs’ pitiful lies against the PMOI in Baluchistan