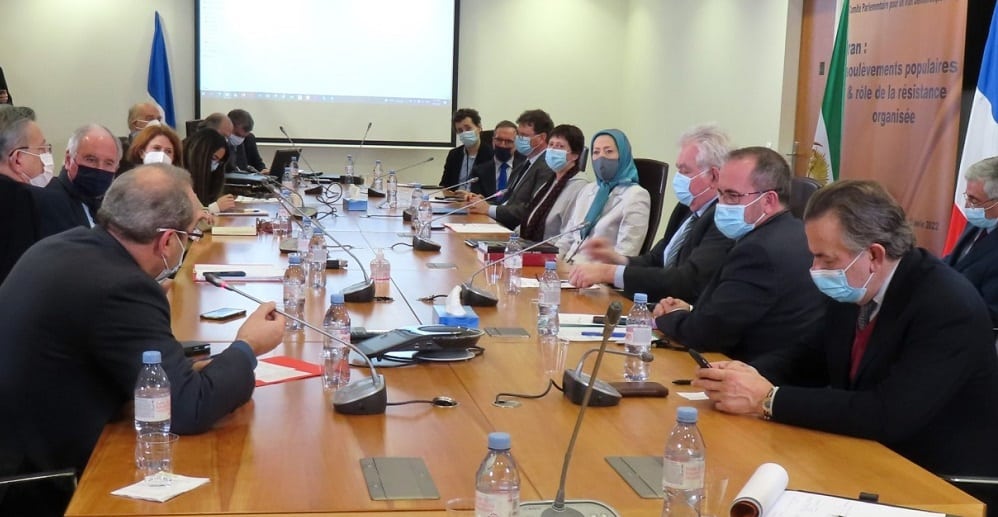 On Wednesday, January 12, 2022, Mrs. Maryam Rajavi, the President-elect of the Iranian Resistance, participated in a discussion session with French lawmakers.

On her arrival, Mrs. Rajavi was welcomed by Ms. Michèle de Vaucouleurs, head of the Parliamentary Committee for a Democratic Iran, and a group of French parliamentarians at the entrance to the French National Assembly building.

To discuss Iran’s critical situation as well as diverse international dilemmas with the regime, French representatives had organized a roundtable, titled “The Uprisings of the Iranian People and the Role of Resistance”, to learn about the analysis and views of the National Council of Resistance of Iran and future prospects. 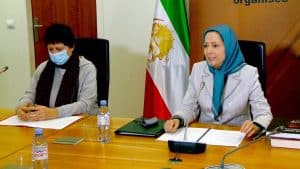 Ms. Michèle de Vaucouleurs, chairman of the committee and a member of the Modem Group (the ruling majority)  presented Mrs. Rajavi a comprehensive report of a five-year-long campaign of the Parliamentary Committee for a Democratic Iran, which includes a term in the French National Assembly. She pointed out that the committee, whose members are from various political groups and leanings in the parliament, including the ruling majority and the opposition, has tried to be the voice of the Iranian people and reflect their demands for democracy and human rights.

Ms. Michèle de Vaucouleurs said: “Our committee has sought to introduce another face of Iran: the face of a free and democratic Iran. That is why we support Mrs. Rajavi’s 10-point plan, which is the answer and the alternative to a country devastated by the mullahs’ regime.”

Then, Mrs. Rajavi congratulated the French representatives on the New Year and said: “The CPID support and the role of every one of you are invaluable for the cause of the Iranian people and Resistance. You have effectively echoed the Iranian people’s desires in France and Europe during this legislative term. Your messages of solidarity have encouraged the Iranian people in their struggle for freedom and democracy. I hope that in 2022, we will continue our joint march for the liberation of Iran.”

Then, Mr. André Chassaigne, vice chairman of the Parliamentary Committee for a Democratic Iran and a member of the Board of Directors of the French National Assembly, outlined the popular uprisings in Iran, particularly the recent uprising in Isfahan, and praised the role of resistance units affiliated with the Mojahedin Khalq (MEK/PMOI) in leading these uprisings.

Then Mr. Yannick Favennec-Becot, Vice Chairman of the Parliamentary Committee for a Democratic Iran from the UDI Group, addressed the aggressive ambitions of the mullahs’ regime in the Middle East and also discussed the declining trend of Tehran’s influence in Iraq, Lebanon, and Syria.

Mr. Hervé Saulignac, deputy chairman of the Parliamentary Committee for a Democratic Iran and member of the Socialist Party, noted the deteriorating human rights situation in Iran as well as the increase in executions, especially after Ebrahim Raisi’s takeover of the presidency.

Mr. Soliniak said: “The French government cannot continue to have the same approach with someone accused of crimes against humanity by Amnesty International and UN experts. Especially last year, a diplomat from the same regime was sentenced to 20 years in prison for his role in state-sponsored terrorism and the attempted bombing of a rally of the National Council of Resistance of Iran in Villepinte. It is time for the French government to stand by the people and the Iranian resistance.” 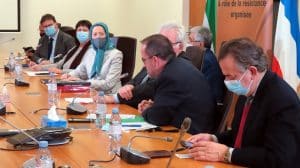 Following the meeting, the French parliamentarians discussed their questions with the President-elect of the Iranian Resistance.

A number of friends of the Iranian resistance, including Mr. François Colcombet, a former judge and honorary member of parliament and one of the founders of the parliamentary committee; Jean-François Legaret, the former mayor of the 1st arrondissement of Paris, and Gérard Vespierre, a political analyst and expert on geopolitical issues, also took part in the discussion.