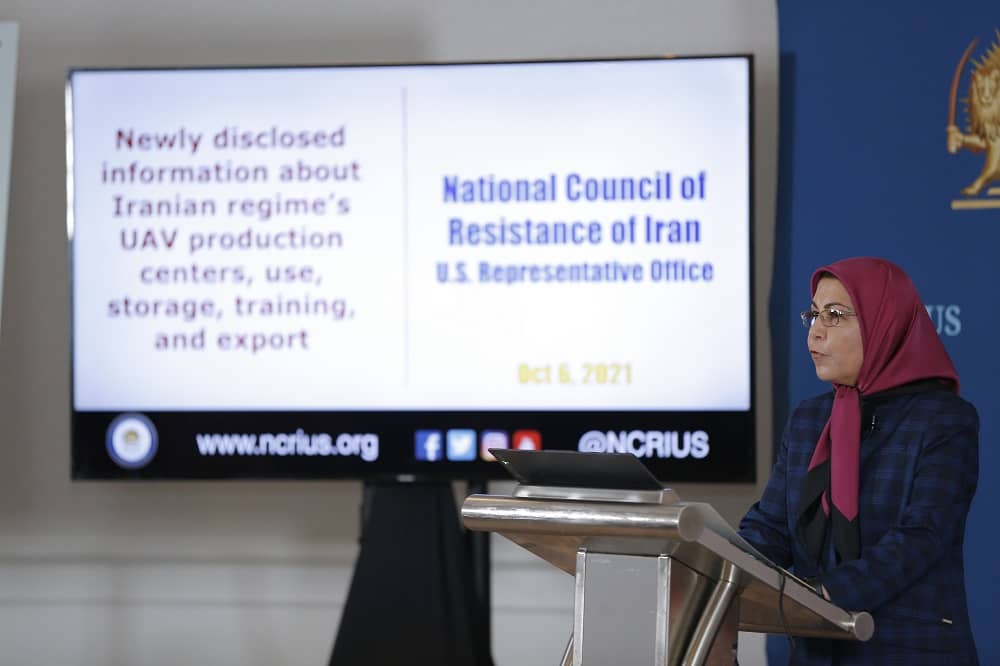 The NCRI-US revealed details of the regime’s production sites and the program’s complete cycle, from production to deployment and from training to procurement. The People’s Mojahedin Organization of Iran (PMOI/MEK) network has obtained this information from inside the regime.

Since its formation in the late 1980s, the IRGC Quds Force’s main task has been spreading terrorism in the region. The Iranian regime’s proxy groups such Hezbollah, Houthis, and dozens of Iraqi paramilitary groups.

According to the NCRI’s report, “In 2003, seven members of the Lebanese Hezbollah received training for the first time on the Mohajer-4 aircraft at the Quds Air Industries, which produces UAVs. Subsequently, the regime sent several of these aircraft to Hezbollah in Lebanon.”

The NCRI’s report also underlined that the Quds Force provides drones to Houthis in Yemen. “According to a report on November 27, 2016, the seizure of six Qasef-1 UAVs being transferred from Oman to Yemen (which is a common smuggling route to Yemen) shows that Qasef-1 was not made in Yemen but transferred from Iran,” the report reads in part.

The world was shocked by the coordinated drone attack on several targets, such as the Abha airport, in Yemen and Saudi Arabia, earlier this year. The Iranian regime initially refused any participation in these attacks. But, now, after the NCRI’s reports, it became once again crystal clear that Tehran was behind those attacks.

Spreading terrorism across the Middle East has been the regime’s strategy since it came to power in 1979. The regime has never stopped its terrorist activities or funding terrorist groups.

Sadly, the western powers have turned a blind eye to the regime’s malign activities. As the NCRI-US report underlines, “the concessions made through the nuclear deal and Western countries’ decision to turn a blind eye to the clerical regime’s destabilizing activities” have encouraged the regime to continue its warmongering plans.

The regime’s terrorist activities are not limited to the Middle East. In 2018, the regime’s so-called diplomat, Assadollah Assadi, was arrested along with his three coconspirators after attempting to bomb the NCRI’s “Free Iran” rally in Paris.

Assadi and his accomplices have been condemned to lengthy prison terms. But Assadi’s network of espionage and terrorism across Europe remains intact, as revealed during the court process.

Yet, instead of curbing the regime’s terrorist activities, the European power has been pushing for further negotiations with the regime and providing incentive packages to the world’s top state-sponsor of terrorism.

As the NCRI underlined after Ebrahim Raisi’s presidency, the western powers should end their dealings with the regime in Tehran. Rais’s government is the embodiment of the regime’s four decades of terrorism and human rights violations. Raisi is under U.S. sanctions for human rights abuses, and his government consists of top IRGC commanders, such as his interior Minister Ahmad Vahidi, the first Quds Force commander. Vahidi is an internationally wanted criminal for his role in the AMIA explosion in Argentina in 1994. Raisi’s Foreign Minister, Hossain Amir-Abdollahian, is known as the Quds Force “field agent.” Thus, dealing with this regime is the approval of terrorism.

The latest NCRI revelation once again underlines the need to adopt a firm policy toward the regime. The western powers should realize that giving any financial concession to the regime would certainly be used by the mullahs’ to proliferate their terrorist activities.

As the Iranian Resistance underlined in its conference, “None of the sanctions against the regime should be lifted until it has stopped all its rogue behavior and intransigence in the region and its repression of the Iranian people.”