A democratic Iran is surely a dream worth pursuing – Amb. Ken Blackwell 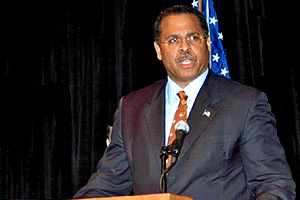 The Obama administration’s nuclear agreement with the regime in Iran is a “bad deal,” argues Ambassador Ken Blackwell, a former Cincinnati mayor and U.S. ambassador to the UN human rights commission.

Regardless of what “spin” the administration tries to put on the deal, “it fails at its core objective of closing all pathways for Tehran getting the bomb,” he wrote.

Amb. Blackwell, writing in Townhall.com on Monday, said: “The verification mechanism is simply too porous in light of the regime’s track record of deception and concealment throughout the past two decades. The 24-day advance notice before inspection of undesignated sites is simply irrational.”

“The deal is too lenient regarding the possible military dimensions of Tehran’s prior nuclear work. This was made clear by the Associated Press’s recent exposé on the agreement signed between Iran and the International Atomic Energy Agency (IAEA) regarding inspection of Parchin, the military base suspected of being the venue for tests of high explosives used in nuclear detonation.

“Little noticed in the West was the fact that the IAEA counterpart in the agreement was Ali Hosseini-Tash, deputy secretary for Strategic Affairs at Supreme National Security Council. The prominent Iranian dissident movement, the National Council of Resistance of Iran has revealed that Hosseini-Tash is an IRGC Brigadier General who has played a key role in Tehran’s drive to acquire nuclear weapons, especially at a time when the Parchin tests were known to be happening.

“But it is not only Iran’s past deception and its continued reliance on the key figures in that deception that makes the Islamic Republic a poor prospect for negotiation. It is also Tehran’s continued support for terrorism, its direct military interference in Iraq, Syria, Yemen, and so on, and its egregious record on human rights.

“Opposition to rapprochement with such a regime is not war-mongering. And by levying this accusation against opponents of the nuclear deal, President Obama has injected undue partisanship into an issue that has grave significance for all Americans and all peace-loving peoples of the world.

“The problem with Iran does not derive from the policies of Democrats or Republicans. The problem belongs to the ayatollahs, who have taken a great nation hostage and turned it into a pariah state.

“The past three and a half decades should have taught us that the Islamic Republic is exactly the kind of country that President Kennedy was talking about. Every single president since 1979 has tried to locate and work with moderates inside the regime. We have repeatedly tried to negotiate in good faith, but Tehran wants to keep everything that is theirs and instead negotiate about our positions and values.

“But there are no moderates within the clerical regime and Tehran does not want and cannot afford to reform and moderate. Initiating reform is tantamount to the end of the theocratic rule. As soon as it starts to moderate its conduct, we will be dealing with a different setting, not the current status quo, and as Ronald Reagan said ‘Status quo, you know, is Latin for ‘the mess we’re in’.’

“The correct policy toward Iran begins with rejecting the status quo and pursuing change. Yet, no coherent Iran policy can be laid out without reaching out to Iranian dissidents as the source for change.

“The most visible, organized Iranian dissident movement is the NCRI which has a clear pro-democracy political platform and an identifiable clear headed leader in Mrs. Maryam Rajavi, who advocates a secular, moderate, democratic Islam as the antithesis of the Islamic extremism of the ayatollahs. Mrs. Rajavi enjoys a solid following among the Iranian Diaspora and among activists inside of Iran.

“The effectiveness of the resistance is evident in the Iranian regime’s ruthless suppression of MEK activists.

“In the summer of 1988, for instance, 30,000 political prisoners primarily members and activists of the MEK, were massacred in a matter of a few months. Yet the resistance has remained vibrant and played a key role in exposing Tehran’s secret nuclear program. It has enjoyed solid support from leading officials in the US Congress and European parliaments on both sides of the political spectrum, as has been evident from their attendance at major annual rallies in Paris, which have drawn more than 100,000 people in recent years.

“In the quest for a robust policy on Iran that stands with Iranians and their cry for freedom and change, the US Congress has a mandate to reach out to these Iranians.

“Bringing change in Iran might seem like a tall order but the ayatollahs are weaker and more susceptive to pressure than ever,” Amb. Blackwell argued.

“A democratic Iran is surely a dream worth pursuing, for the good of Iranians and of the world. It is a problem that can be solved, but only if we acknowledge the reality of whom we are dealing with in Tehran and match its deceptions and desperation with steadfast courage and vision.”