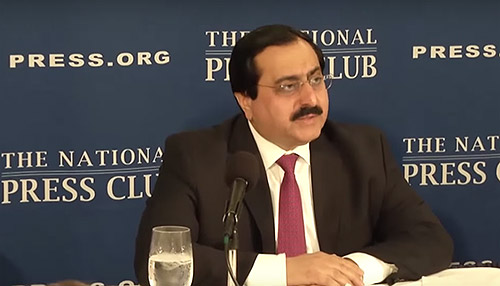 NCRI – The only reason that the Iranian regime came to the negotiating table and eventually agreed to the Joint Comprehensive Plan of Action to curb its nuclear weapons program was because it was hurting as a result of the sanctions, international isolation, and most importantly, as a result of extensive discontent among the Iranian population, particularly the younger generation, says Alireza Jafarzadeh, Deputy Director of the U.S. Representative Office of Iran’s Parliament-in-exile, the National Council of Resistance of Iran (NCRI).

“The Iranian regime was afraid not just of the economic sanctions, but the political consequences of those sanctions, which they wanted to avoid. Tehran was desperate and this was the issue of the survival of the Iran regime,” Mr. Jafarzadeh said.

Mr. Jafarzadeh made the remarks at a Newsmaker conference organized by the National Press Club in Washington on Monday on the “Iran Deal Verification Problems, Regional Security Issues, Iranian People Concerns.”

He was joined at the conference by Dr. Olli Heinonen, the highly regarded nuclear inspector of Harvard’s Belfer Center and former deputy director of the United Nations nuclear watchdog (IAEA) and U.S. Navy Commander Kirk Lippold (ret.) who was Commander of the USS Cole when it was attacked by terrorists in Yemen in 2000.

“If the West had exploited the absolute desperation of the Iranian regime, they could have gotten a lot more concessions; They could have, for example, dismantled a significant part of the nuclear infrastructure, shut down Fordow, prohibited the ability for research and development on advanced centrifuges, and intrusive inspections, not the 24 days of delay,” Mr. Jafarzadeh said.

“The people of Iran were entirely fed up with the nuclear program, as they saw no benefit for them, and instead a program meant to prolong the rule of the mullahs. And when the agreement was announced, they felt relief, because they sensed that they can now push for breathing room, and call for freedom.”

“The people of Iran did not care about the nuclear program, and contrary to what Tehran claims, do not consider it a national pride. The people of Iran see this as an opportunity for change. L.A. Times quoted some demonstrators who were chanting freedom. Others were demanding the release of political prisoners.”

“Iran, and the Supreme Leader Ali Khamenei, has not changed its plan to build the nuclear bomb. To the contrary, Tehran continues to pursue nuclear weapons. That is the only reason they wanted to maintain the program, and do the R & D, and deny access to military sites. So, the threat of the Iranian regime remains intact. Add to it the terrorism threat, the regional meddling and the suppression of its own population inside the country.”

“This regime is weak and vulnerable. Because the supreme leader had to back down and cross several of his redlines, and because he was weakened by internal dissent, despite all the undo concession by the P 5+1, this regime is more vulnerable today than it was two years ago when they started the negotiations. This regime is far more desperate to get some benefit out of the talks, that it has no ability to walk away, even if more pressure is brought upon the regime.”

“This regime is rotten to the core, and plagued with corruption and mismanagement. Nothing will save its economy and it is beyond repair. The inflation is over 30 percent, 50 million Iranian live below the poverty lines, unemployment is over 40 percent; there are 14,000 homeless in Tehran, a third of them women. The oil industry needs at least 500 billion dollars to get back to the pre-sanctioned era. And the regime has never used its resources even before the sanction to improve the living conditions; to the contrary they have been spending billions of dollars in supporting proxies in the region and sponsoring terrorism around the globe.”

“If the objective of the talks have been to end the nuclear threat of Iran; that has not been accomplished. The Iranian regime’s threat has never been countered thru negotiations; nor is there a need to resort to war.”

“In fact, the alternative to this deal is not war. This is a misrepresentation of the facts. The alternative is to apply more pressure on the regime and provide no more concession. Further decisiveness would further weaken the regime and paves the way for millions of Iranians to bring about democratic change in Iran.”

“Iran is ripe for change, and the population is ready to rid itself of this ruthless, corrupt theocracy.”

“And lastly, some of the limitations on the sanctions and the nuclear program go away in 5, 8 and 10 years. Perhaps the only logical justification is that a few years from now there would be a different regime in Iran. It would be wise for the United States to side with the people of Iran, those who have been striving for change. There’s no need for going either to war or continue concessions and appeasement to the Iranian regime; The third option is to side with the people of Iran as they are engaged and striving to have a non-nuclear, secular republic in Iran. That’s the right policy that the U.S. Government should pursue.”