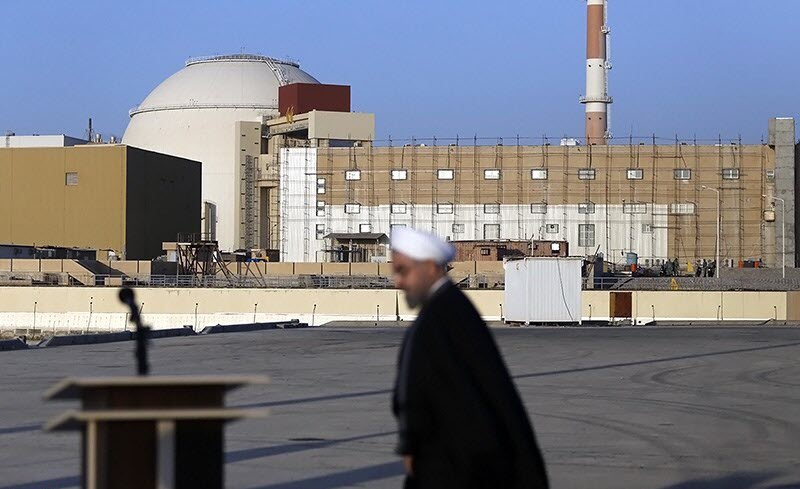 On Saturday, the three European signatories of the 2015 Iran nuclear deal issued a joint statement in which they raised alarms over the Iranian regime’s latest violations and its persistent threats to move further away from the agreement unless the international community capitulates to the regime’s demands. French Foreign Minister Jean-Yves Le Drian even went so far as to describe the latest measures as advancing Iran’s nuclear weapons capability. In so doing, he implicitly rejected Tehran’s oft-repeated claim of having ruled out military applications of research and development that is supposedly intended for nuclear power generation and atomic research.

In response, Le Drian’s Iranian counterpart Mohammad Javad Zarif accused the French government of disseminating “absurd nonsense.” He also asserted that France, the United Kingdom, and Germany have done nothing to preserve the seven-party agreement from which the United States withdrew in 2018. “JCPOA is alive because of Iran and the E3,” he said on Twitter.

Le Drian’s comparatively assertive remarks on Saturday were among the latest signs that there is growing support for this strategy.

Saturday’s statement from the E3 concerned Iran’s decision to begin work on the production of uranium metal, which can be enriched into a key component of the core of a nuclear weapon. The statement referred to “potentially grave military implications” and said that Iran has “no credible civilian use” for the material. It then urged the Iranians to return to full compliance but gave no clear indication of what consequences the regime might face for failing to do so. Meanwhile, even the French foreign minister joined the rest of the E3 in placing an equivalent onus on Washington and Tehran to rejoin the deal.

This is very much in keeping with the approach that Europe has traditionally taken to dealing with Iranian threats and provocations, but it is precisely the wrong approach. If the Europeans succeed in convincing the new U.S. administration to unconditionally resume participation in the JCPOA, it will mean giving Iran exactly what it wants, as a reward for all of its systematic violations.

The regime’s Foreign Minister Zarif’s claim about Iran’s single-handed preservation of the JCPOA is completely false. The Europeans have done everything in their power to keep the agreement on life support since the American withdrawal. Even after Iran announced that it had halted all compliance and the E3 triggered a dispute resolution mechanism that could have resulted in all sanctions snapping back on Iran, the European Union’s head of foreign policy made it clear that he and his colleagues were prepared to draw out that process indefinitely. It has now been a year, and the EU should have something to show for its patience other than the return to a status quo that has proven to be unworkable.

Josep Borrell, the foreign policy chief, said on Monday that the EU “deeply regrets the worrying steps taken by Iran” and sees the latest violations as matters of particularly “deep concern.” Yet Borrell continues to express almost slavish commitment to preserving the agreement in its current form. His position is shared by some in Europe, but their reasons are all wrong. They recognize that the continued expansion of Iran’s nuclear activity represents a severe threat to the region and the world, but instead of seeing this as a reason to impress upon the regime the consequences of misbehavior, they use it as justification for panicked surrender.

The Europeans portray this notion that the new U.S. administration has a narrow window in which to take action, but this is exactly what the regime is trying to portray to make the West lift the sanctions.

The right approach to Iran’s blackmail is not to offer more concessions, but to build an international coalition to put more pressures on the regime. Doing so would put the International community in a position to not only forestall Iran’s nuclear weapons capability but also to make positive strides in dealing with a wide range of issues, from Iran’s ballistic missile tests to the proliferation of Iran-backed regional militias, to the ongoing trends of hostage-taking, human rights abuses, and repression of dissent in Iran.

Previous articleIran: Mesbahi, a Member of the Assembly of Experts and the Expediency Discernment Council, Admits To an $80 Billion Annual Money Laundering Scheme
Next articleIran: Coronavirus Fatalities in 478 Cities Exceed 203,800