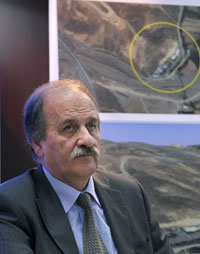 By ELAINE GANLEY
PARIS (Associated Press) — An exiled Iranian opposition group called on the U.N. nuclear agency Tuesday to waste no time in examining a hidden site near Tehran that it claims is used to help build nuclear detonators.

The National Council of Resistance of Iran, or NCRI, the political arm of the Mujahedeen Khalq, said the site is built under a hillside east of Tehran and comprises a series of interconnecting tunnels. "All activities related to the manufacture of detonators are done in this web of tunnels," Mehdi Abrichamtchi told a news conference.

The group first revealed its claims about the site at a September news conference. It provided what it said were details about its construction and workings Tuesday. The site is allegedly under what the NCRI says is the Research Center for the Technology of Explosion and Impact, or METFAZ, which is run by the Iranian Defense Ministry.

Abrichamtchi said the group obtained its information from sources within the powerful Revolutionary Guard and the Defense Ministry, the two organizations it claims are behind Iran's alleged bid to build nuclear weapons.

Abrichamtchi claimed that tunnel construction for both METFAZ and a site near the holy city of Qom began in 2000. Iran made public the existence of the site at Qom this year, and U.N. inspectors visited it last week, although their findings have not been made public.

The revelation of the previously clandestine plant under construction near Qom increased concerns by the United States, France and other powers that Iran may be enriching uranium for use in nuclear weapons. Iran insists its nuclear program is strictly civilian, for research and energy purposes.

The opposition group regretted that authorities waited until this year to act on the Qom site, claiming the group had signaled its existence in 2005. In fact, the Mujahedeen told a news conference in December 2005 that the Iranian regime was building a network of tunnels and underground facilities in about 14 locations, including Qom.

Abrichamtchi said his group had signaled the existence of the METFAZ site, in a military area near the town of Sanjarian, to the International Atomic Energy Agency but had received no response.

"We hope the international agency won't wait four years as for Qom to move to visit this site … before the mullahs get a chance to move things around and cover up the whole thing," he said. "The regime is much closer to the bomb."

The NCRI has a mixed record of accuracy. In 2002, it disclosed the existence of two nuclear sites that helped uncover two decades of Iran's clandestine nuclear program. However, other so-called revelations about a nuclear weapons program have not been publicly verified.

With diagrams at hand, allegedly "originals" from Iran, Abrichamtchi said workshops at the METFAZ site used to help make detonators for a nuclear explosion are embedded in the web of tunnels. Three vertical tunnels lead to the surface with hillside entrances hidden behind two large warehouses, he said.

Abrichamtchi described a setup of front companies to conceal work on secret nuclear sites, including Qom. He claimed, for instance, that tunnels at Qom were built in part by Qorb-e-Qaem Company, allegedly the engineering section of the Revolutionary Guard Corp's Air Force.

The opposition group appealed to the international community for a firm position on Iran's nuclear program, notably a boycott, of oil, technology and other critical products.

The Vienna-based U.N. nuclear agency is currently awaiting a response from Tehran on a proposal allowing Iran to ship most of its enriched uranium abroad for further enrichment, a way to ensure it does not have enough material at hand to make a bomb.

"Waiting for a written response … is to run after a mirage," Abrichamtchi said.