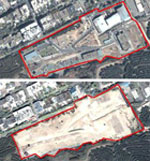 The Daily Telegraph – Fresh evidence has emerged that Iran is working on a secret military project to develop nuclear weapons that has not been declared to United Nations inspectors responsible for monitoring Iran’s nuclear programme.

Nuclear experts working for the International Atomic Energy Agency in Vienna are pressing the Iranians to make a full disclosure about a network of research laboratories at a secret military base outside the capital Teheran.

The project is codenamed Zirzamin 27, and its purpose is to enable the Iranians to undertake uranium enrichment to military standard. Zirzamin means “basement” in Farsi, which suggests the laboratories are underground and 27 refers to the 27-year-old Iranian revolution.

Concerns over activity at Zirzamin 27 will be raised at this week’s meeting of the IAEA’s Board of Governors in Vienna, which starts today.

Suspicions have been growing that Iran has a secret military nuclear research programme since UN inspectors discovered particles of enriched uranium at a research complex at Lavizan, a military base on the outskirts of Teheran, in 2003.

The Iranians agreed to allow IAEA inspectors to visit the Lavizan complex but then razed it to the ground before the inspectors arrived.

Iranian nuclear officials have ignored repeated requests by IAEA officials for a detailed explanation of the Lavizan project. Now the IAEA officials are studying new intelligence indicating that the Lavizan research project has been moved to a secret military location outside Teheran.

Although IAEA officials do not know the precise location of Zirzamin 27, they have comprehensive details of its activities.

“This is a truly alarming development,” said a senior western diplomat working with the IAEA. “This evidence indicates that the Iranians remain committed to developing nuclear weapons, despite their claims to the contrary that their nuclear ambitions are entirely peaceful.”

Teheran has consistently argued that its nuclear programme is aimed at developing an indigenous nuclear power industry. But Iran’s insistence on developing its own uranium enrichment facilities has raised concerns that it has a well-advanced programme to develop nuclear weapons.

The Zirzamin 27 operation is thought to be being supervised by Iran’s Revolutionary Guards under the direction of Mohsen Fakhrizadeh, the head of Iran’s Modern Defensive Readiness and Technology Centre, a top-secret military research site.

According to reports being studied by IAEA officials, scientists working at Zirzamin are required to wear standard military uniforms when entering and leaving the complex to give the impression they are involved in normal military activity. They are only allowed to change into protective clothing once inside the site.

Special attention has also been given to developing specialised ventilation systems to make sure no incriminating particles of radioactive material are allowed to escape.