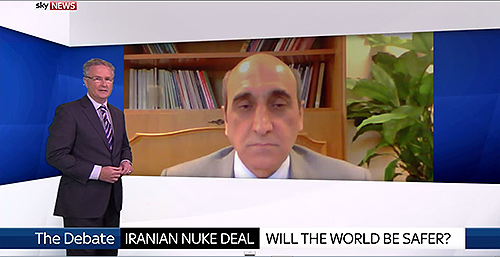 In a live interview on Wednesday, Shahin Gobadi of the National Council of Resistance of Iran (NCRI) said: “One should have no illusions about where we are today. The Iranian regime has been striving to obtain nuclear weapons for almost the past three decades. This program has all the markings and ingredients of a weapons program, and there is no other logical reason for the Iranian regime to be so insistent on continuing this program, because according to the regime’s own assessments, which we have obtained, this does not make any sense economically.”

“The man who has to make the ultimate decision is Ali Khamenei, the Iranian regime’s Supreme Leader,” he said.

Mr. Gobadi said the nuclear talks have dragged on for long periods “simply because Khamenei is in a major deadlock. He is at a major impasse.”

“For the past two and a half decades he has invested so much in obtaining nuclear weapons as a guarantor for the survival of his regime. On the other hand in the past few years the economic sanctions have started to bite and he realizes that the Iranian people are more restive than ever. He is very much fearful of mass uprisings similar to what we witnessed in 2009. Simply put, he is caught between a rock and a hard place. He wants to have the cake and eat it too.”

When asked whether the Iranian regime can be trusted in the negotiations, Mr. Gobadi rejected the notion of trusting the mullahs and said: “One has to be very clear here. The keyword here is transparency, not trust. What do I mean? The Iranian regime should come clear on the past military aspects of its nuclear program. That’s where they are hiding the skeleton in the closet, because they know if they allow snap inspections and a verification system, people will find out that this is a nuclear weapons program and all their bluffs will be called and the real nature of this program will be known. So that’s why they keep repeating the word trust-building, trust-building, but the key phrase here is transparency.”

“As Mrs Maryam Rajavi, the President-elect of the Iranian Resistance, has said time and over, unless there is absolute access to any military or non-military site, access to the Iranian scientists by the IAEA, clearance on the past military dimensions and as long as the Iranian nuclear stockpile is not transferred outside of Iran and as long as the UN Security Council resolutions are not implemented, there is no way that you can guarantee that all the pathways to the bomb have been closed.”

“Track record is very important here. For the past two decades and particularly in the past 12 years since the Iranian Resistance and the National Council of Resistance of Iran revealed the existence of such a secret nuclear program, particularly the existence of Natanz and Arak, the attitude of the Iranian regime vis-à-vis the IAEA and the international community has been ‘hide and seek’ and ‘catch me if you can’. You cannot find one single site that the Iranian regime has voluntarily exposed to the IAEA. You cannot find one project that this regime has told the IAEA voluntarily. They have only acknowledged them after they have been caught completely red handed when other sources like the Iranian Resistance and others have told so much on them that there was no other choice. With this kind of a background, talking about trust is simply misplaced. The issue here is transparency, and unless these measures are taken there is no way that you can guarantee that all the pathways to the nuclear bomb are closed.”
“The West, and particularly the US, has made too many concessions already. Any principled policy will look somewhere else for change. The narrative that you either go for the bomb or you make a deal with the mullahs, I think, is a wrong narrative. There is another choice for change from inside Iran: reaching out to the Iranian people, reaching out to the Iranian Resistance for democratic change, for true change. The ultimate solution is a regime change in Iran by the Iranian people and the organized Resistance, because the idea that if you make a deal with this regime, their policies vis-à-vis their transgressions in the region, their abuses inside the country, their support for terrorism are going to ebb is delusional at best. The regime is not going to give up on its pillars of power. By giving them concessions and loosening sanctions you simply embolden them. They are not going to change course,” Mr. Gobadi added.