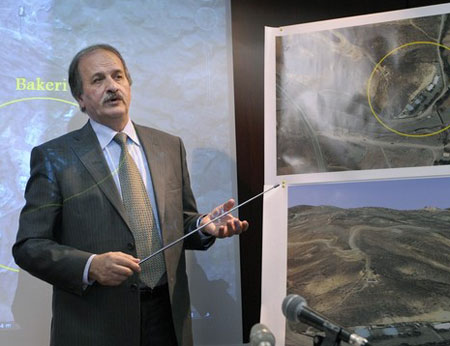 PARIS (AFP) — Iran has been building secret nuclear weapons labs separate from its uranium enrichment sites since as early as 2000, the country’s main opposition group in exile claimed Tuesday.

The People’s Mujahedeen, a banned opposition group, has long claimed that Tehran’s Islamic government is engaged in illegal weapons development and has urged the international community to impose tough sanctions.

On Tuesday, at a press conference in Paris, the movement gave what it said were more details of Tehran’s alleged attempt to construct a nuclear warhead, claiming to have evidence that the work goes back more than eight years.

The United States and other Western powers have strong concerns about Iran’s enrichment of uranium, which they suspect is designed to lead to weapons-grade nuclear material, but have been less explicit on warhead technology.

Last year, an assessment by US intelligence agencies estimated that any Iranian attempts to build an actual nuclear bomb, as opposed to enriched fuel, had been suspended in 2003. Other experts have cast doubt on this.

For its part, Tehran has strenuously denied having any intention of building nuclear weapons, while insisting on its right to enrich uranium for use in future power plants or medical research.

The Mujahideen, part of the National Council of Resistance of Iran (NCRI), said in Paris that in addition to its uranium enrichment sites Iran has also built “several installations in eastern Tehran.”

According to Mehdi Abrishamchi, chairman of NCRI’s “peace committee”, these sites are controlled by the “Research Site for Explosion and Impact” (METFAZ), a state body linked to the regime’s Revolutionary Guards Corps.

One of these sites is a network of underground tunnels in a military area by the Jajrood River near the village of Sanjarian.

“According to our information, this facility is involved in building high explosive material to be used to detonate a nuclear bomb,” Abrishamchi said, showing reporters plans and satellite photographs to back up his claim.

In addition to highly-enriched nuclear material such as plutonium or weapons-grade uranium, atomic weapons require a powerful conventional charge to force the fuel together and trigger nuclear fission.

The alleged existence of the Sanjarian plant has been claimed before by exiled opposition groups — which are not connected to the internal protest movements that have sprung up since Iran’s June 12 presidential election.

But Abrishamchi said his group’s sources had discovered more details about the site’s protective tunnel system which they claim proves its military role and urged the international community to act.

The United States, France, and Russia are pressing Iran to agree to a deal brokered by the United Nations’ International Atomic Energy Agency (IAEA) under which it would ship its stockpile of uranium abroad for processing.

After initially signaling that it was open to an agreement, Tehran has hardened its tone and appears to be backing away from the proposal.