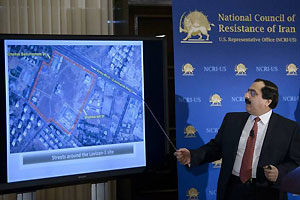 Some 30 hours after the National Council of Resistance of Iran (NCRI) unveiled for the first time details of a secret nuclear site the Iranian regime has resorted to a hasty, desperate and pathetic propaganda blitz against the Iranian Resistance.

At a news conference at the National Press Club on Tuesday, February 24, 2015, the U.S. Representative Office of NCRI, unveiled information about Lavizan-3 site, where research and testing with advanced centrifuge machines for the purpose of uranium enrichment were being conducted.

Instead of addressing the concerns of the international community about the nature at the site and instead of providing access to the International Atomic Energy Agency, the regime resorted to the pathetic propaganda blitz.

On Sunday, February 22, the NCRI-US announced that it intends to hold a press conference on “Secret, Parallel Nuclear Program in Iran – Details to Be Unveiled.” The next day, the regime’s president Hassan Rouhani and the head of the expediency council, Akbar Hashemi Rafsanjani, attempted to preemptively cast doubt on what was going to be made public, describing it as a “big lie.” Following the press conference on Tuesday, February 24, the Iranian regime’s envoy to the UN, Gholamali Khoshroo, and Mansour Haqiqat-pour, the deputy chair of the national security and foreign policy committee of the regime’s parliament, side stepped NCRI’s intelligence entirely, and instead cried out that the NCRI was “anti-humanitarian” and a “spent, mercenary force.”

If that were not enough, a website in an article written by an unidentified individual claimed that the image of the 40 cm thick and radiation-proof doors of the four-hall underground Lavizan-3 site, which was presented at the news conference and included in the NCRI report, was fabricated and was actually taken from the website of a company in Iran called Ganjineh Mehr Pars (GMP). One other discredited website, whose collaboration with the Iranian regime has been common knowledge for the past 10 years, posted the same story.

The NCRI-US offers the following clarification:

1. The Iranian Resistance reiterates most emphatically its call on the International Atomic Energy Agency (IAEA) to demand immediate access to Lavizan-3 and see the centrifuge machines in-situ.

2. Instead of beating around the bush, the Iranian regime must grant immediate access to the IAEA to conduct a thorough inspection of Lavizan-3. However, by engaging in such publicity stunts, Tehran is trying to buy time to destroy the evidence of its decade-long illicit activities at Lavizan-3. This ruse is simply a pathetic and desperate smokescreen on the part of the Iranian regime to conceal the truth and to overshadow the impact of the exposure of its secret uranium enrichment research using advanced centrifuges in an underground site.

4. The image displayed at the press conference had been provided to the NCRI by its sources in Iran and was not grabbed from the GMP website. In fact, that image was posted on the Company’s website recently as a product sample, whereas the NCRI had been working on compiling information on Lavizan-3 for the past several years and thus possessed the image long before it was posted on the GMP website.

5. This is the image of one of the doors installed at one of the underground halls at Lavizan-3. It was taken after its construction at GMP workshops and prior to being transferred to Lavizan-3 for installation. In its report, NCRI did not specify the name of the company that had built the doors, and it chose not to show the full picture for security reasons and to protect the source(s) of the information.

6. In 2005, Kalaye Electric Company ordered 4 of these doors from GMP. The individual who referred the GMP Company to Kalaye Electric was named […] Shahbazian, who is a friend of Farrokh Esfandiari, the Director General of GMP. At the time, the cost for building each door was about $30,000 and it took about three months to build them.

7. GMP installed the doors at Lavizan-3. Trucks transported the doors to the site. They were then lowered into the tunnel, using cranes, through the elevator shaft area (because the elevator had not yet been installed). Once underground, the doors were moved around by small manual cranes and mounted on a roller pulled by a Land Rover pick-up, which had also been lowered to the underground site.

8. GMP built a number of vault doors for the Natanz site in the same year. This company is currently engaged in manufacturing doors for weapons depots of the Intelligence Ministry to be installed in the [Iran-Iraq] border region. In 2014, GMP built explosion-proof doors for Pars Garma Company (affiliated with the Ministry of Defense) to be installed in Gachsaran in Khuzistan Province.

9. In a marketing booklet published by GMP, it boasts that “highly advanced technology is used in the construction of these doors,” and that “GMP Company is the sole producer of this product inside Iran in compliance with international standards.” “This product will probably be used in Iran’s nuclear energy program, and as such is under [international] sanctions and cannot be practically procured from abroad…,” the booklet adds. Two of its six utilities listed in the booklet include, “nuclear energy centers and nuclear facilities,” as well as “military capabilities in nuclear and laser testing systems.” (The marketing booklet written in Farsi language is available)