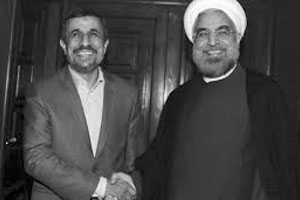 Source: New York Post, July 16, 2013
By BENNY AVNI
US officials are set to meet in Brussels today with representatives of other world powers to strategize on Iran’s nukes. Here’s something to consider: Iran’s new president’s own words.

Washington reportedly wants to launch direct talks with Iran, testing how serious President Hassan Rouhani, elected last month, is about his election promises to “engage” with the West over the nuclear program.

This, despite Rouhani’s past record of careful deception about Iran’s nuclear drive. Many have cited his boasts about those deceptions in a recent book, but even more damning are his remarks in a closed-door address to Iran’s Supreme Council of Cultural Revolution in October 2005.

In that speech, previously unreported in the West, Rouhani explained how, with careful prevaricating — cheat here, obfuscate there — and by exploiting the differences within the international community, Iran can achieve its nuclear dream, and then present it to the world “as fait accompli.”

Ending a two-year stint as top nuclear negotiator for Iran, Rouhani told the elite group of mullahs about his dilemma in dealings with the world: How many lies can Iran get away with?

So he did his best to tell only as many lies as he could get away with.

Amazingly, it worked. Over and over again, as Rouhani told the mullahs, Iran was caught cheating. Yet the West failed to realize that he was negotiating in bad faith.

* China and then Russia told the International Atomic Energy Agency about nuclear-related materials they’d sold Iran — which Tehran was supposed to disclose, but hadn’t. Oops.

* A copy of an Iranian project manager’s report detailing a nuclear experiment found its way to IAEA inspectors. Oops.

* An Iranian professor published the result of another covert experiment in an international journal. Oops.

* A group of anti-regime Iranians told the West about undisclosed experiments at a nuclear facility in Natanz. Oops.

So how did Rouhani, the then-negotiator, manage to explain away all these lies?

Mostly, he told the mullahs, he exploited differences between European negotiators and Bush-era Americans: “From the onset, the Americans kept telling the Europeans that the Iranians are lying and deceiving you, and they have not told you everything.”

But the Europeans were desperate to “trust” the Iranians, Rouhani said; admitting that he was lying would mean admitting that the negotiations were a farce. Rather than face the implications of that, they closed their eyes and kept the talks going, as Iran advanced its program.

But then came the Libya fiasco. After the United States deposed Saddam Hussein, Libya’s Moammar Khadafy decided to come clean about his own secret arms caches, including a nascent nuclear program.

(Iran could have gone Khadafy’s way too, Rouhani said. But that would have meant “recognizing Israel and cutting off relationship with all the liberation movements in the world.” It did neither — instead, it continued to lie.)

Realizing that the IAEA would soon catch on, Rouhani admitted that Iran had bought from that Pakistani dealer. He told the inspectors almost everything — “except one item, and that was the P2 centrifuges.”

Which was his MO all along: disclose some, while denying the most incriminating part.

On it goes. Iran continues to use the tricks that Rouhani perfected.

As Rouhani put it so aptly in that 2005 lecture: “We need some time to implement our capabilities. I mean, if we could complete the fuel cycle and make it fait accompli for the world, then the whole situation would be different.”

Yet the Obama team is eager to “test” Rouhani’s intentions. It’ll be a “quick” testing period, they say.

Knowing how Rouhani operates, however, expect that test to last many months, even as Iran nears its nuclear goals.

How about, instead, heeding Rouhani’s own words?

Previous articleIranians, US Dignitaries, Faith Community Leader Denounce Martin Kobler Conduct
Next articleProtective Measures Are Necessary to Ensure the Safety and Security of the Population of Camp Ashraf