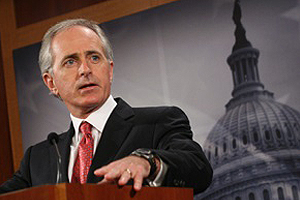 The Obama administration’s nuclear deal with the regime in Iran will not prevent Tehran from developing a nuclear weapons program, Senator Bob Corker, chairman of the U.S. Senate Foreign Relations Committee, said on Tuesday.

“Now that the Obama administration has reached what it believes to be an acceptable agreement, it is Congress’s responsibility to determine whether this agreement will be in our national interest, will make the United States safer and will prevent Iran from developing a nuclear weapons program. I do not believe that it will,” Sen. Corker, a Republican, wrote in The Washington Post.

“Rather than end Iran’s nuclear enrichment program, over time this deal industrializes the program of the world’s leading state sponsor of terrorism,” he wrote.

“For a deal that must be built on verification and not trust, the inspections process is deeply flawed. Through verbal presentations regarding possible military dimensions, many in Congress are aware of the unorthodox arrangements agreed to by the International Atomic Energy Agency, the administration and our negotiating partners to keep from upsetting Ayatollah Ali Khamenei. Those actual agreements remain secret, but we know that at best they are most unusual and speak to the P5+1’s low commitment to holding Iran’s feet to the fire.”

“Perhaps a larger issue is beyond the scope of the deal itself. Absent a clearly articulated policy for the region, this deal will become the linchpin of the United States’ Middle East strategy. We will be relying on Iran to help achieve our goals in Iraq, Syria and perhaps elsewhere. This abrupt rebalancing could have the effect of driving others in the region to take greater risks, leading to greater instability. Iran was fully aware of this, which helped the regime continually erode the deal to its benefit, and it will become an impediment when we try to push back against potential violations of the agreement.”

“Since negotiations began in earnest after President Hassan Rouhani was elected in June 2013, Iran has co-opted the Iraqi security sector, doubled down on its support of Syrian dictator Bashar al-Assad and cemented Hezbollah as an expeditionary shock force.”

“The perception of U.S. disengagement from the Middle East reached its height in summer 2013, when President Obama decided against enforcing his own red line in Syria and chose not to conduct a limited strike against the Iranian-backed Assad regime in response to its use of chemical weapons. That November, the United States and other world powers signed an interim nuclear agreement with Iran as 100,000 Syrians lay dead. As negotiations continued and the administration ignored the crisis in Syria, the death toll climbed higher. By the time the final nuclear deal was reached last month, more than 200,000 Syrians had been killed.”

“In 2014, the carnage in Syria spilled into Iraq as the Islamic State took over large swaths of the country. While the United States struggled to find the right course of action, Iran filled the power vacuum.”

“Many say now is the time for the United States to push back against Iran. The best way to do that is for Congress to reject an agreement that strengthens Iran with hundreds of billions of dollars over the next decade, removes the conventional weapons and ballistic missile technology embargoes on Iran and allows for a U.S.-approved, industrial-scale enrichment program for which Iran has zero practical need.”

“Unfortunately, the agreement ties our hands in countering Iran’s efforts. If we try to push back, Iran will threaten to speed up its nuclear development since it already will have a windfall of money, a rapidly growing economy and alliances built with our partners, who will feast on the mercantile benefits of doing business with Iran.”

“I came to these negotiations with an open mind. Prioritizing engagement over coercion in an attempt to end three decades of animosity with Iran appeals to the American idealism in us all. And while we should strongly support diplomacy, the other side must believe there are real consequences in its failure.”

“The administration has repeatedly stated that this agreement is about ensuring Iran does not get a nuclear weapon. Therefore, the agreement should be one that allows us to maintain leverage and ensure it is enforceable, is verifiable and holds Iran accountable.”

“This deal does not do that,” Sen. Corker wrote, adding: “Congress should reject this deal and send it back to the president.”