Denial of Khatami candidacy, in spite of his repents to clerical 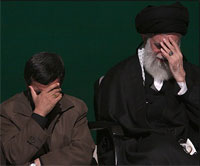 NCRI: According to The  internal bulletin of the revolutionary guard December 15, so called the reformist within the regime are strongly  in favor of taking part in the sham presidential election, and their candidate is Mohammad Khatami.  Those Close to Khatami believe that the regime is domed to his approval. And he will be the winner in the first round. It is believed that recently khatani has sent some letters round, to many of those in power and expressed his innocence and said: “I have nothing to do with these issues and is not true.” But Jannati has said “There is no possibility for the re-election of intriguing and they should not even have the illusion again.”

SOBH SADEGH Journal (Weekly Journal of the revolutionary guards) in 17th December, has printed the professional explanations of Mullah Jannati in relation to the election of reformist be divided into three categories:
1) reformist  who intend take part in the elections  which  believe should be completely free and on their view the election is free that as  Mousavi and Karoubi can be candidate. It is clear that those are the intriguing, not only should not be a take part, and should be tried for treason charges at the appropriate time.
2) Reformist who do not set  conditions but have history of intriguing against the regime. If they also do repentance, are not eligible to take part. Like Khatami, who said if Mousavi nominates himself, then I will not..
3) Those who have a history of reform, but had not been with uprising, but also had not hold strong stand against them also cannot take part. These people also have no rights to enter elections and  do not qualify. Like someone who says, I would not join the nomination if khatami enters (meant Mohammad Reza Aref -AhmsdiNejad deputy  ).

Previous articleDeputy Commander of the IRGC: the United States has spent $3 trillion dollars in Iraq but the fall of Saddam Hussein and departure of Mojahedin from Iraq was a political benefit for Islamic Republic of Iran.
Next articleMullahs’ regime’s vain effort to prevent imminent fall of Assad