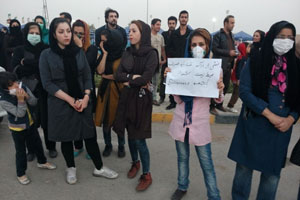 Resident in the southern Iranian city of Ahvaz took to the streets on Friday (January 30) to protest against the Iranian regime’s lack of action regarding the worsening dust pollution in the oil rich province of Iran.

Ahwaz has been the most polluted city in the world, based on data compiled by the World Health Organization in 2013.

The news media outlets in the country did not report on the demonstration by the residents but the photos of the protest were distributed in the social media.

On Friday, the air in Ahwaz remained filled with dust.

Every year about 80,000 people in Iran die of environmental pollution, according to the official figures.