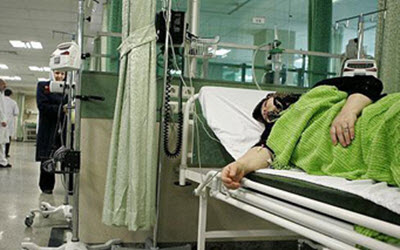 NCRI – Considering the high cost of medicine and medical care, each year a percentage of the Iranian population fall below the poverty line after providing the crippling costs of such services.

The Health Ministry’s budget deficit is kicked down the road one year after another, forcing ordinary Iranians pay more for lower quality services.

Many people in cities and villages, especially in areas far from city centers, are deprived of minimum medical provisions. Many cities around Tehran are in such conditions and lack even one hospital with beds to accept patients.

The crisis of worn-out hospitals has reached a point that an Iranian MP says 60% of all hospitals across the country are considered worn-out.
“If renovation in these center is not placed on the agenda, we will most certainly be witnessing irrecoverable damages after certain crises,” he said.

This Iranian MP from Isfahan went on to refer to the conditions of hospitals in Isfahan Province, saying there are only four new hospitals and other such facilities are all worn out.

“It is a good opportunity for the government and parliament to learn from the Plasco (burned down iconic high rise in Tehran) incident and take action to improve conditions in our hospitals,” he added.

“In addition to the fact that worn-out conditions pose safety risks in cases of earthquakes, they also causes psychological damages and place obstacles before patients’ recover process,” said Shahla Mirgolubayat, a member of the Iranian Parliament Health and Treatment Committee.

“We must not wait for an unhappy incident to occur to have us answer the question of why did we act late. The Plasco incident is only a tip of the iceberg of the conditions our buildings are in, and there are many other examples across the country. This includes hospitals, universities and schools. However, it appears officials prefer not to hear the alarm bells,” the state-run Quds Online website wrote.

45% of all hospital beds are also worn-out and are in no condition to be repaired, according to state-run run TV citing the regime’s deputy health minister.

“Conditions are even worse in Tehran. In 2007, 87% of all hospital beds were worn out. This has lowered to 75% this year,” the state TV report added.

“A look at the conditions of our country’s hospitals shows the average age of the 570 government-run hospitals across the country are more than 35 years. This means 87 hospitals are even older than the Plasco building,” the report continued.

In such conditions patients in Iran are forced to live with their illnesses while hospitalized in extremely dangerous and low quality hospitals. Whereas most of the country’s budget is allocated to the regime’s crackdown machine and warmongering outside of Iran.