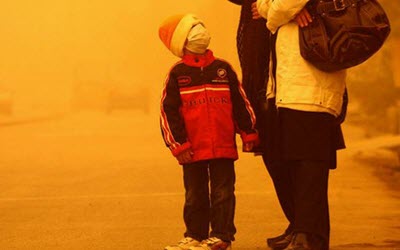 This daily first refers to the subject of dust storms making life very difficult for the province locals. This daily writes:

A large number of people believe in addition to foreign sources and various centers of these dust storms, the drying of border ponds, including the Hour al-Azeem Pond or Karkhe Nour, are amongst the main reasons behind the growing dust storm crisis in Khuzestan Province.

The drying of one pond means the disruption of natural life cycle of a large number of living beings that have coordinated with the surrounding geographical area through literally centuries. Such measures are not only considered an anti-nature measure according to global standards, it is also an inhumane act. The reason is that human beings are in fact related and in balance with the natural cycle and relative ecosystem.

It is nearly two decades now that through the construction of various dams and … for various reason that one can truly say not even 20% of its objectives have been realized, … the entire Khuzestan ecosystem is undergoing widespread tensions, and dust storms are one of the end results.

Unfortunately, the lack of a comprehensive environment management system as the first step in this field, and also each apparatus that is pursuing its own plans in this region has in fact very effectively added velocity to this trend.

On the other hand, the decrease in Khuzestan’s water supply is also another result of a lack of comprehensive perspective and weak planning. This is considered adding insult to injury for the people of Khuzestan.

All these issues have resulted in the recent crisis, leading to different breathing illnesses, blood and lung cancer, prematurely born babies, added costs of health care and preventive measures, water and power cut-offs and … all leading to the people’s lives coming to a standstill. Electronic and digital systems will suffer major damages, creating huge expenses for the government.

Such a crisis will not be resolved with managers that lack any programming and planning. Today, we have reached a red line and alarm bells are being heard on a constant basis. Khuzestan Province, once considered a very fruitful region, may in a few years become an abandoned desert.

This phenomenon is spreading in an alarming pace.