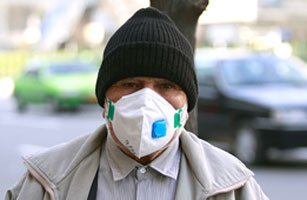 NCRI – Schools, universities and government offices in Tehran were closed on Saturday for the second time in a month because of high air pollution.
For nearly a week, officials of mullahs’ regime in Tehran and other large cities have been calling on residents to remain indoors or avoid downtown areas, saying that with air pollution at such high levels, venturing outside could be tantamount to “suicide,” state radio reported Saturday.

Emergency services also advised residents to avoid unnecessary travel in the city, state-run ISNA news agency reported.
Even though closure is not a solution, the decisions for closures were made by Tehran pollution committee after smog failed to dissipate for three days, the state-run Mehr news agency reported.
A recently released report by Tehran’s department of air quality control concealed the true level of air pollution by typing spaces where there should have been information about levels of benzene and lead — components of gasoline — in the air.
Iran under the mullahs is outstandingly represented in the World Health Organization’s 2011 report on air quality and health, with three of its cities among the organization’s list of the world’s 10 most polluted cities.