Iran Regime’s Energy Minister: There Is No Region Spared of Water Concerns 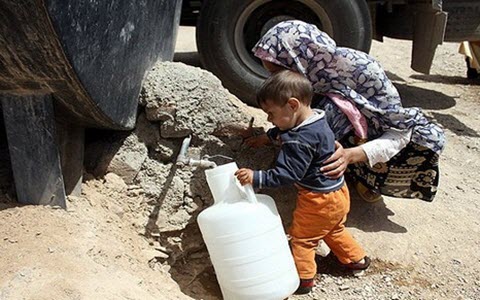 NCRI – The Energy Minister of Rouhani’s government admitted that the issue of water in Iran has become very acute and problematic. On Saturady, August 5, 2017, state-run media quoting Hamid Chitchian wrote: “Water issues in all parts of the country have become acute and there is no region in the country that does not have water concern.”

Taghi Kabiri, Iranian regime Member of Parliament, said that, if no attention is paid to the problems of water scarcity, it will lead to serious social crises, noting the regime’s fears of public discontent becoming social protests and crises.

Meanwhile, the regime’s Director of Water and Wastewater in Khuzestan (southwest of Iran) on Wednesday, July 19, 2017, admitted: “We have almost no cities in the province of Khuzestan that have no water shortage and problems.

The drought situation also continues in Isfahan province, with 95% of Isfahan area affected by long-term droughts.

The state-run ISNA news agency quoting a senior official at the Meteorological Center in Isfahan wrote on August 2, 2017: “Long-term (hydrological) drought situation in Isfahan province will lead to a very severe drought.”

Moreover, drinking water in 21 villages in the Parsabad city of Moghan (northwest of Iran) is interrupted by increasing water consumption in the heat season and water resources limitation, while water is cut off for several hours during the day.

The water crisis and providing drinking water in turns to villages of Parsabad Moghan occurs while the border town is located near the Aras River.

Despite over 38 years of rule of the mullahs in Iran, in some areas of Moghan, in nomads and mountain areas, due to the lack of plumbing water, there is a constant and everyday problem of easy access to safe and sanitary water and everyday people have to wait for a long time for water tankers to arrive.