Iran Regime Threatens to Imprison People for Reporting on Floods 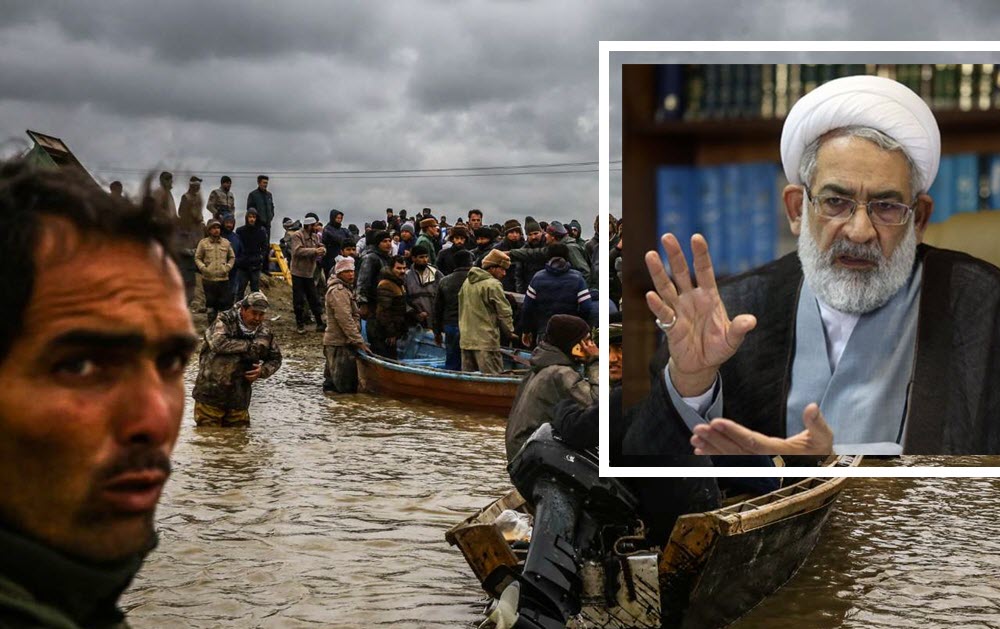 The Iranian Attorney General said that posting “fake” news about the floods currently devastating certain provinces in Iran would be considered a security threat and would involve police charges.

Mohammad Jafar Montazeri said: “In the first stage, the sources of the publication of false news should be identified and when identified, they will [be] dealt with.”

While Interior Minister Abdolreza Rahmani Fazli complained about social media reports documenting the Regime’s incompetence, or downright apathy, regarding dealing with the flood in the northern province of Golestan.

The state-run ISNA news agency quoted him as saying: “I told judicial authorities and the prosecutor to deal with those who are behind publishing fake news and those who are looking to exaggerate the problems in flood-stricken areas.”

Iran’s cyber police have echoed these threats, with Colonel Ramin Pashaie, the Social Deputy of Iran’s cyber police saying that the “police would deal with those who spread rumours about the recent floods on social media” as these rumours would only “lead to the disturbance of public opinion and peace of the society”.

ISNA quoted him as saying: “We have asked all provinces to monitor the internet and if they witness any rumours or content that disturbs public opinion or social peace, to quickly carry out necessary measures to deal with the publishers once identified.”

He then asked the public to ignore reports on social media and only get their information from state-run news agencies.

With that in mind, it’s worth looking at what the Regime is dismissing as “fake” news and why they are so focused on convincing the Iranian people not to believe it.

Many eyewitnesses to the devastating flood that hit 25 provinces in Iran, with the southern city of Shiraz being hit most severely, have posted videos and images of what they’ve seen on social media platforms. These back up claims about the severity of the floods and the lack of appropriate response by the mullahs.

The Regime is even hiding the true number of victims. The mullahs claim that only 19 people lost their lives when floods hit Shiraz’s historic Quran Gate, which would still be a tragic loss, but the real numbers as divulged by local people is at least 150, with the number rising to 200 when you factor in other cities.

By why would the Regime do this? Because they fear that angry people would start protesting if they knew the truth and the Regime is terrified that the people will soon overthrow them.