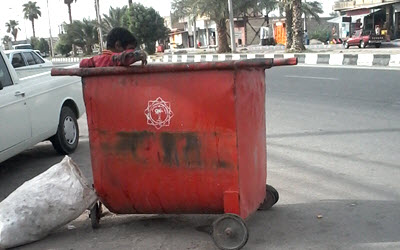 NCRI – In an article titled ‘the pathology of eliminating child labor from the streets’, the state run newspaper Jahan-e Sanat reports on Thursday December 15 on the issue of street children being abused by regime’s organizations, writing “after municipality’s attempts to simply ignore the causes giving rise to the presence of homeless, street peddlers, beggars, etc., it is now the working children’s turn. Apparently, the city officials have got used to decorating the urban furniture with such shortcuts, turning to improper, harmful measures instead of resolving the problem.”

The newspaper then points to Tehran municipality’s taking advantage of the working children, writing: “municipal contractors deploy unaccompanied children for collecting trash, sending them full-length into garbage carts while keeping them in public unhealthy dorms with wretched conditions. While racketeers are exploiting the children in front of officials’ eyes and everyone is remaining silent, this should not be regarded as an unexpected change in direction since Tehran’s municipality has in the past few years tried to hide such issues instead of radically resolving them.”

The daily then points to the shocking seven million working children in the country as reported by children-supporting NGOs, and continues: “according to parliament’s research center, there are nearly four million children in the country who are deprived of education. On the other hand, the large number of immigrant children as well as Iranian children without birth certificates have not been accounted for in the official figures. Now, the question is that if these four million children deprived of education are not working, then what are they doing?”