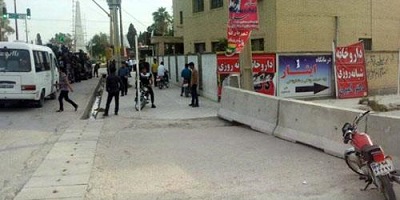 NCRI – The second round of the Iranian regime’s Parliamentary election on Friday was widely boycotted by the people of Iran.

The regime held run-off votes in 21 of Iran’s 31 provinces, but reports by activists of the Iranian Resistance who monitored the polls across the country said that the vast majority of polling stations were empty throughout the day.

In many polling stations, officials tried to encourage people to vote by telling them they wouldn’t need to present their identity cards or a photo ID in order to participate. Some agents of the regime were witnessed casting ballots in more than one voting station. In some areas, by-passers were offered money to cast a ballot.

Meanwhile, there were reports of further feuding among the regime’s factions on voting day. In the Nourabad District of Mamasani, central Iran, members of the Khamenei faction attacked members of the Rafsanjani-Rouhani camp for bringing people from the town of Marvdasht to vote for their candidate. They attacked the home of the local election head with bricks and wood, smashing windows and damaging the premises.

State security forces arrested several of the attackers. Skirmishes between members of the rival factions continued into the day, and by 2pm local time there was a report of a shooting at the nearby Taleh Kouli polling station in which four voters were injured. At least 50 people were reportedly injured in similar clashes in the area throughout the day.

On February 28, following the first round of the regime’s elections, Maryam Rajavi, the Iranian Resistance’s President-elect, said that a glance at the list of candidates presented by the regime’s various factions left no doubt that the election was not genuine and that the choice was merely between different factions responsible for suppression, execution, exporting terrorism, warmongering, and plundering the Iranian people’s wealth.

Mrs. Rajavi emphasized that the election result would not bring any serious change to the Iranian people’s political and economic livelihood and would have no consequential winners within the clerical regime. The real loser is the ruling theocracy in its entirety. In view of the crisis raging at the apex of the ruling elite and considering the Iranian people’s ever-increasing anger and hatred, the regime has taken a qualitative step toward being overthrown, she said.