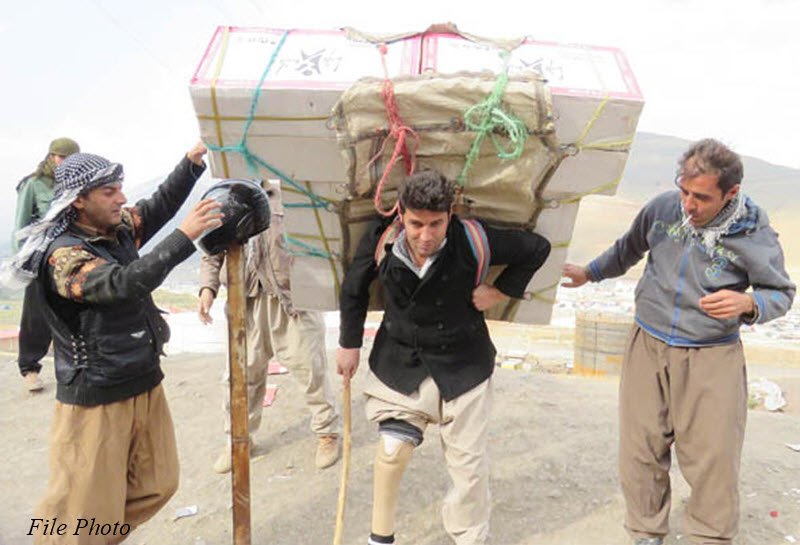 His name is Jamil and he is 24. He got married four years ago and now has an eight month baby girl.

Jamil used to be a porter (kolbar) for one year, up until November 3, 2017, when he was shot and injured and had to stay at home.

A few days ago, regime’s security forces summoned Jamil, asking him to withdraw his complaint he had filed against the border guard for shooting and injuring him out of work.

Faced with his negative response, the border guard fined Jamil two million tomans for working as a porter, giving him one week to pay the fine or otherwise go to prison.

According to state-run Ghanoon newspaper on May 7, 2018, Jamil hasn’t paid his rent for a few months now and is worried his landlord will soon kick him out. After all, there’s the cost of living everyone has to pay.

He says that he had no option but to work as a porter so he could earn his family’s livelihood, as there are many unemployed young people in the city, with their low-income families unable to financially support them.

Jamil says that he was paid between $12 and $24 for carrying a 50-kilo load of clothes, hygiene and cosmetic products from across the border. Besides, 3 to 5 dollars was deducted for his own transportation and food costs.

The young porter goes on to say that after being shot and injured by border guard, they put some white papers in front of him to sign. “Being severely injured, I told them there’s nothing written on these papers to be signed”, Jamil says. But he eventually is threatened into signing the papers anyway.

Jamil says that the officers came to him twice and asked him to withdraw the complaint he had filed against the border police, but he answers each time “I’m no longer able to work with such injuries, so I’ll withdraw my complaint only if you pay my hospital costs.”

Receiving Jamil’s negative response, the officers tell him that he has been fined $500 for working as a porter and that he has to pay the amount within a quarter-hour.

Jamil tells them he doesn’t have that amount and won’t be able to provide it, either.

Jamil was then sent to jail, but was bailed out the next day by a relative who put forward his payroll. Jamil was then given 10 days to either pay the amount or withdraw his complaint.

“I paid nearly two million tomans for treatment and I was willing to withdraw my complaint if the border guard agreed to pay me that amount”, says Jamil.

Pointing to unemployment situation in the city where he lives, Jamil adds “what I want to say is that if the city’s job seekers could be employed or start a business then they wouldn’t have turned to working as a porter with all its dangers and problems involved.”

“If I had a job that paid me $7 a day so I could pay the rent and household costs, then I would never have worked as a porter “, Jamil says.

Kolbars are porters who work for daily wages on the borders of Iraqi Kurdistan and Iran. These porters transfer goods across the border. Kolbar is the Kurdish word for “porter.” A kolbar’s daily wage generally doesn’t exceed ten dollars. The vast majority of kolbars are Kurds who live in the towns and villages along the Iran-Iraqi Kurdistan border. These kolbars are often times current students and recent graduates trying to support themselves financially; because of the lack of work opportunities for young Kurds in this region, this porter work is one of the few substantial means of steady income.

Who owns the goods?

The majority of goods being smuggled belong to businessmen based in Tehran, the capital of Iran. These businessmen use the kolbars to transfer goods into Iran without having to pay taxes on them. These goods are often also banned in Iran as well. Goods often include cigarettes, alcohol, clothes, tire, and electronics (e.g. Ipads, televisions, and smartphones). A good number of these businessmen are shielded from exposure and prosecution because of their strong relationships with figures within the Iranian regime.

who is Killing the kolbars?

It is noteworthy that In 2016 alone, 42 kolbars were shot and killed by Iranian security forces —in 2017, at least 72 kolbars have been killed or injured in shootings by Iranian security forces. The irony is that the Iranian regime often issues permits to these workers; however, they are still not protected from the violence of the border guards. Regime forces also often times shoot and kill kolbar horses.