The Accelerating Pace of Poverty in Iran 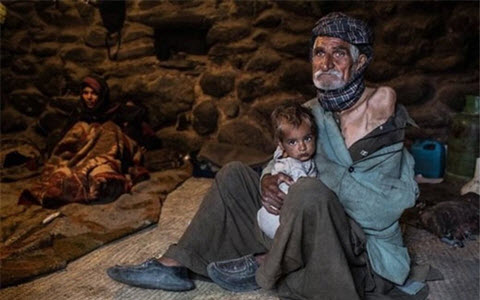 NCRI – The accelerating pace of poverty extension in Iran is due to the innumerable corruption of government officials. The harmful effects of poverty among the people are so obvious that even the state-run media and regime officials are inevitably forced to admit this fact.

Of course, since he knows that this is not a real figure, he immediately adds: “It is very difficult to define absolute poverty in our country, and if we want to elaborate on it in details, it has a political burden and it should be seen whether the authorities are ready to undergo the political burden of this issue in front of the global assemblies? (Iran regime state TV, 17 July 2017).

Prior to this, Mohammad Mokhber Dezfuli, head of Khomeini’s Command Headquarters, had said: “The poverty situation in the country is extremely inadequate, with 12 million people below the absolute poverty line, and 25 to 30 million people under the relative poverty line, (state-run Asr-e Iran website, 6 July 2017).

The head of the Khomeini Relief Committee and the head of Khomeini’s Command Headquarters have certainly cited the statistics far less than reality, because Ali Akbar Sayari, Deputy Minister of Health of Rouhani’s cabinet, had previously said: “Currently, 30 percent of the people in the country are hungry and do not even have bread to eat, and the Ministry of Welfare confirms this figure, (state-run Mehr News Agency, 15 August 2016).

According to this statement of Sayari, more than 25 million people are hungry and live under the absolute poverty line.

So, according to Raghfar’s statement, about 35 million people are under the absolute poverty line. In addition, his statement came two and half years ago after which according to the state-owned media and government officials’ confession, people’s lively hood has deteriorated since then.

Those people in the absolute poverty line are those who, at the very least, do not have the necessary income for their basic needs, or basically have no income, so much so that many of them have to search for food in the waste and garbage.

The state-run ISNA news agency on 30 July 2017, in the article titled “The trash can that becomes children’s food table!” reports the regretful state of a child searching for food in the garbage dump. The report is summarized as follows:

“The almond-eyed teenage boy is so black and smoky that whoever does not know what is going on may think he is selling coals. His pant is at least three times larger than his size and is folded several times at footpad. His long shirt has reached his knees and his wrinkled hands tell of his early aging. He bends into the garbage bins up to his wrist and empties the garbage bags one after the other, and finally, he finds the bread at the expense of his life. He says that I often find lunch in the garbage, but I eat my dinner with my friends who also search for food in the garbage dump.”

This is a deplorable situation in the sense that in the mullahs’ regime every year, Iranian food tables become smaller and the government has no specific plans to stop the poverty and reduce the number of poor people.

It is also the result of social inequality and class divisions that deepens year by year.

Naturally, if the concept of poverty is spread to the lag and backwardness of health, education, housing, etc., then the harmful effects of poverty will be better understood in people’s lives. Lack of adequate food, housing, education and health, is one of the deprivations that deprives the poor of having a decent life making them extremely vulnerable to illness, economic crises and natural disasters.