Unemployment in Iran Stands at 35 to 40 Percent 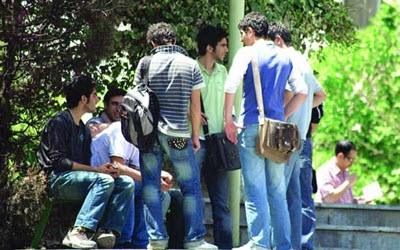 Each year an average of 1 million people enter Iran’s work force, according to the state-run Quds Online news agency. When we place these statistics alongside those who have lost their jobs due to deep economic recession and production units closing down in Iran, without a doubt we all think about one subject: the unemployment crisis!

“In the past few years the increasing number of universities and their capacity is amongst the elements behind the slow entrance of new workers into the market. However, the number of students entering universities has decreased. This year 1.2 million seats are empty in our universities. The government’s policies to create jobs have been wrong during the past four years,” said Hossein Raghfar, an economist in Iran.

“The [12%] unemployment rate is related to individuals who are completely unemployed and don’t even work one hour a day. For example, people working 15 hours a week are considered to have a part-time job. However, if we add their numbers to the number of people who are completely unemployed, the all-out figure would increase to 35 to 40%,” he added.

The statistics provided by state institutions is a type of pain killer for government officials so they can claim the country’s unemployment is not high at all, Raghfar explained. Otherwise, the truth in Iran today is far from the official 12% unemployment rate.

“One of the most important challenges we face today is unemployment, which is becoming a super-challenge,” said Iranian Vice President Es’hagh Jahangiri.

“Unemployment has reached above 30% in some place, and it is even doubled for women in some areas,” he continued.