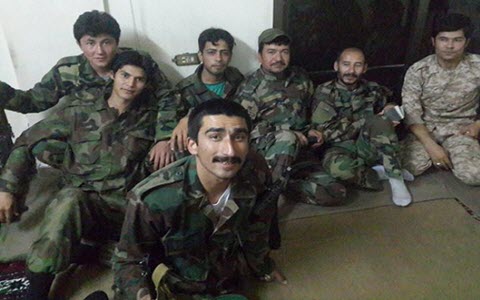 NCRI – The government of Afghanistan has responded to comments that were made by the deputy chief executive of the unity government Haji Mohammad Mohaqiq in relation to the latest developments in the civil war in Syria.

He praised the Lebanese Hezbollah, the Afghans and Iran’s Islamic Revolutionary Guard Corps (IRGC) for providing assistance, training, finance and so on to the current regime in Syria.

ARG Palace, the Office of the President, released a statement saying that Afghanistan faces the same threat that is emanating from terrorism that is instigated by groups such as the Islamic State. It said that forces from Afghanistan are going to the frontline to try to eliminate groups like the Islamic State so that the region can be rid of the terrorist threats that are currently rife.

With reference to the comments that were recently made by Mohammad Mohaqiq in Syria, the statement said that it is a complete contradiction and goes against all foreign policy and national interests of the country. It added that it was also contradictory to the enforced laws and the peace and stability of the country.

The government of Afghanistan said that comments such as those made by Mohammad Mohaqiq could pose a great danger to the unity of the country and its people and reiterated that the government is committed to ensuring that people making comments such as these will be held accountable because they are serious and have the potential to undermine the stability of the country.

Mohaqiq was recently in Syria where he made the comments and he thanked everyone for their cooperation in the Syrian civil war. He said: “I thank all the warriors who cooperated in these wars from Iraq, Syria, Afghanistan, Pakistan and other parts of the world who attended the wars. In fact it was the war of Islam against infidelity and against the conspiracies of the world arrogance.”

He also highlighted the role of “our dear brother” Qasem Soleimani and said that Hezbollah leader Hassan Nasrullah has been instrumental in the “victories” in Syria.

The Afghan government said that Afghan nationals are not supposed to fight for any other force other than those under the country’s national flag. It was emphasised in the statement that the government has not, and will not, engage in proxy wars and it will not allow its country to be turned into a proxy war field.

The Fatemiyoun brigade operates under Iran’s Islamic Revolutionary Guard Corps (IRGC), and Mohaqiq was recently seen at a gathering with it in Syria.

The controversy surrounding this brigade is making many worried about the fate of the young people of Afghanistan who have been involved in the conflict in Syria, amid reports of deaths of young fighters.