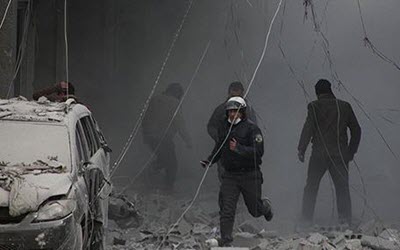 The situation around Damascus has become critical, so much that the United Nations has expressed concerns in this regard.

A few days before the negotiations in Geneva kicks off, Assad’s regime has stepped up military operation in opposition-controlled populated areas of Damascus, thereby killing their residents.

Ahmad Ramadan, member of Syrian National Coalition, said in this regard in his interview with Sky News on February 21 “it’s quite clear. Any time we get close to a political procedure of event, the efforts for its failure begins with stepping up military pressure. This is not the first time it happens. It also happened during previous talks. That was aimed at putting the coalition delegation under pressure and force them to pull out of the talks, thus making the international community to fail as well.”

Pointing to the efforts made by the Iranian regime and its affiliated militias to sabotage the political procedure, Ramadan said “we are clearly witnessing how the Iranian regime is boosting military attacks in Damascus suburbs. Iranian regime’s militias prevent humanitarian aids from reaching there and have intensified bombing and shelling of besieged areas so as to force residents leave their homes, similar to what’s happening in Sarghaya.”

Regarding the role of the parties ensuring the ceasefire, Ramadan said “It’s impossible for Russia to deny its responsibility in this regard.
Russia has set out its role as a guarantor of ceasefire in Ankara and then again in Astana, but stepped back from this process afterwards and now they are blaming others. We are now on the eve of Geneva talks, but I think any discussion of preparing or stabilizing the ceasefire would be inconclusive.”

Member of Syrian National Coalition maintained that “Geneva talks should be focused on transfer of power in Syria as this is an issue that could most likely resolve all other issues on the table, including terrorism. We believe that resuming political talks would be somewhat futile.”

Previous article
Iranian Resistance Calls on Int’l Community for Release of Ahmad Montazeri
Next article
A State-Run Media: Iran Should Accept That the World Order Has Changed